On Friday’s two-hour premiere of “America’s Next Top Model,” a mixture of male and female models flashed their flesh for the cameras. For the first time in its history, the long-running reality show featured a theme of “Guys & Girls.” Several of the young contestants also came forward as out members of the LGBT community.

Right from the start, ANTM presented controversial gender issues when Jeremy, a 19-year-old Christian virgin, said at a group audition:

“There’s a lot of guys here. None of them are like guy-guys. Like, all of them are feminine. Me, I’m like someone who watches football. Who lifts weights, has muscles. So, I think that makes me different.”

The show is scheduled to run Friday’s at 9pm EST.

Virgg, another 19-year-old contestant, announced early on that she was a transgender woman who had recently begun transitioning. When looking through her choices of lingerie to model, Virgg made it clear to one of the show’s assistants that she didn’t want “anything exposed.” In an interview, she added ethusiastically:

“I was born male, but I am going through the changes to become female. I’m going to own that transgender label because I’m proud of it. You know, if somebody on the street asks, ‘Are you that transgender girl from Top Model.’ Hell yes, I am!”

The show’s first challenge was have all of the men and women march out in sexy undergarments, and then to have them kiss someone of the opposite gender, on the mouth, in front of both an audience and the judges. 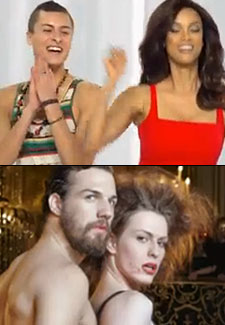 Cory, a 22-year-old gay man, described himself as being “very androgynous — a little more feminine, a little more edgy.” When it came time for him to choose one of the female models, Cory hesitated, then surprised everyone by choosing one of the men instead. “It was my turn to choose a girl,” he said. “I surveyed everyone. And in that moment I was just like — aahhh. I gotta be me. So, I just spun around, I chose Rhyan.”  Later, Cory told host Tyra Banks that he had been picked on for being gay in school. Classmates had taunted him with the nickname “Tyra.”

Virgg picked furry Phil for their runway kiss. Phil said he figured that there “was a 37% chance I kissed a dude.” Later he charmed the judges with his openness about that intimate moment. After saying he was “straight as can be,” one judge suggested he might be bisexual. “Maybe I am,” he replied. “Maybe, you know — I liked it.”

During her follow-up interview, Virgg revealed that Tyra had chosen her specifically from an Instagram contest to be on the show. Virgg told the judges that the earlier participation of Isis King, ANTM’s first transgender contestant, had been of great help during her school years.

Unfortunately, by the end of the second hour, Virgg indicated that she was suffering from the effects of estrogen treatements, and she asked to be excused from the rest of the competition. Tyra Banks sympathized, and said she knew from Isis that transitioning felt like being “early pregnant. but even crazier.”

Previews of the retooled show promise a season filled with more awkward anguish, sexual tension, fear and fiercness. One contestant, Alexandra, has already predicted that Cory won’t be able to compete successfully:

“He’s super fun. But I think his downfall in this competition is going to be that he needs to be masculine in these photos. And I think it’s tough for him.”