D.C.'s LGBT community and allies step up to commemorate the historic 1963 March on Washington for Jobs and Freedom

The LGBT community and its struggles for equality will share the stage alongside other communities advocating for social justice as community organizers, activists and civil rights leaders participate in a host of activities to commemorate the 50th anniversary of the 1963 March on Washington for Jobs and Freedom.

The march, famous for Martin Luther King Jr.’s ”I Have a Dream” speech and for raising the country’s consciousness, focused on the struggle for equal rights, particularly on economic opportunity. This 50-year commemoration of that Aug. 28, 1963, mark on America’s timeline will also celebrate the ongoing work of activists and advocates working for voting rights, immigration reform, employment and LGBT equality. 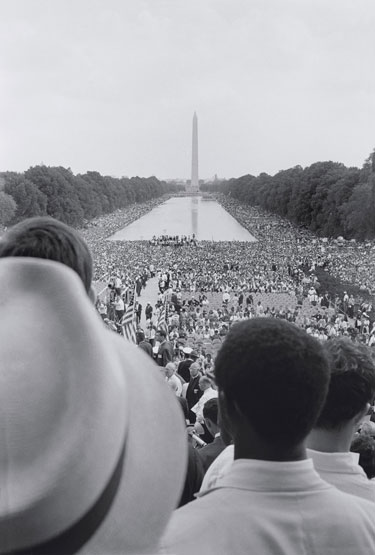 On an Aug. 20 conference call, Chad Griffin, president of the Human Rights Campaign, the nation’s largest LGBT civil rights organization, said the aim of the march, as it was 50 years ago, is to urge Congress to take legislative action on these various fronts. With regard to LGBT rights, Griffin focused on the struggle for marriage equality and the pending Employment Non-Discrimination Act (ENDA), which would provide federal workplace protections for LGBT people.

Many of the LGBT-related local events between Aug. 23 and Aug. 28 will invoke the name of the late Bayard Rustin, the gay civil rights leader who worked closely with King on several initiatives and is credited with planning the 1963 March on Washington. On Aug. 8, the White House announced that President Barack Obama will posthumously award Rustin with the Presidential Medal of Freedom.

Among those LGBT-related events, the Mayor’s Office of GLBT Affairs, in partnership with the Mayor’s Office of Community Affairs, the National Gay and Lesbian Task Force, the Human Rights Campaign, the National Black Justice Coalition and the Center for Black Equity, will host a forum, ”What’s the Unfinished Business for the LGBT Community?” to discuss the progress made since the original March on Washington and future challenges confronting the movement.

Sterling Washington, director of the Mayor’s Office of GLBT Affairs, says that event will feature various speakers representing different movements within the LGBT community. The event will be held Friday, Aug. 23, from 4:30 to 6:30 p.m., in the foyer of the Rayburn House Office Building, at 45 Independence Ave. SW.

On Saturday, Aug. 24, organizers will hold the first of two major marches, with the second occurring on Aug. 28, the exact anniversary. Prior to the Aug. 24 ”Action to Realize the Dream March and Rally for Jobs, Justice & Freedom,” sponsored by the National Action Network, Mayor Vincent Gray and other advocates for D.C. statehood, including the organization DC Vote, will host a short rally at 8:30 a.m. at the District of Columbia War Memorial, on the north side of Independence Avenue SW, across from the Martin Luther King Jr. Memorial.

The statehood rally will include a contingent from the city’s major Democratic LGBT organization, the Gertrude Stein Democratic Club of Washington. Participants will then feed into the larger march, starting at 10 a.m.

On Monday, Aug. 26, the A. Philip Randolph Institute, an AFL-CIO-affiliated organization, along with the National Black Justice Coalition and the American Federation of Teachers, will host ”A Tribute to Bayard Rustin and the 50th Anniversary of the 1963 March on Washington,” which will focus heavily on Rustin’s role in organizing and executing the famous march.

That event will be held from 6 to 9 p.m. at the Historic Lincoln Theatre, located at 1215 U St. NW, and will include a screening of a segment from the award-winning documentary Brother Outsider: The Life of Bayard Rustin.

Wednesday, Aug. 28, the Center for Black Equity will host an event commemorating the role that Rustin played in organizing the march, with a panel discussion featuring Congresswoman Eleanor Holmes Norton (D-D.C.); Mandy Carter of the National Black Justice Coalition; Damien Connors, the national executive director and chief operating officer for the Southern Christian Leadership Conference Inc. (SCLC); and the Rev. MacArthur H. Flournoy, who serves as the director for faith partnership and mobilization at the Human Rights Campaign (HRC). The discussion, followed by a reception, will be held at the HRC Equality Forum at 1640 Rhode Island Ave. NW, at 7 p.m., and will be broadcast live enabling viewers to ask questions and engage in online chat during the event.

Another event, sponsored by the DC Commission on the Arts and Humanities, celebrating Rustin and the gay African-American novelist James Baldwin, was originally scheduled for Aug. 22, but has since been postponed to September.

For more information about LGBT-related events during the March on Washington 50th Anniversary, call the Mayor’s Office of GLBT Affairs at 202-727-9493 or visit glbt.dc.gov. For general information on commemoration events, visit marchondc50.dc.gov.

John Riley is the local news reporter for Metro Weekly. He can be reached at jriley@metroweekly.com
← Previous Story A Date To Remember
Next Story → Robbie's Rules