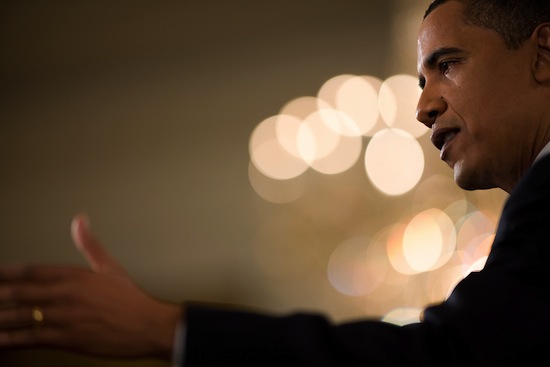 President Barack Obama said Friday he opposes a boycott of the Winter Olympics set to be held in Sochi, but reiterated his condemnation of an anti-LGBT Russian law prohibiting “propaganda of nontraditional sexual relations.”

“I do not think it’s appropriate to boycott the Olympics,” Obama told reporters during a Friday afternoon press conference at the White House. “We’ve got a bunch of Americans out there who are training hard, who are doing everything they can to succeed.”

However, Obama reiterated criticisms he made of Russia’s anti-LGBT earlier this week during an interview with Jay Leno on The Tonight Show, in which he said he had “no patience for countries that try to treat gays or lesbians or transgender persons in ways that intimidate them or are harmful to them.”

“Nobody is more offended than me by some of the anti-gay and lesbian legislation that you’ve been seeing in Russia,” Obama said Friday. “But as I said just this week I’ve spoken against that not just in respect to Russia but a number of other countries where we continue to work with them but we have a strong disagreement on this issue.”

Although some activists have called for a boycott of the Olympic games set to be held early next year, White House press secretary Jay Carney said yesterday that that is not a conversation the administration is having. On Friday, Obama said a clearer message could be sent by example rather than a boycott.

“One of the things I’m really looking forward to is maybe some gay and lesbian athletes brining home the gold or silver or bronze, which I think would go a long way in rejecting the kind of attitudes that we’re seeing there,” the president said. “And if Russia doesn’t have gay or lesbian athletes, then it’ll probably make their team weaker.”

Obama’s remarks came hours after the International Olympic Committee (IOC) asked Russia to provide greater assurances of how the anti-LGBT law will be applied during the Winter Games.

Earlier this week, the White House announced Obama canceled a bilateral meeting scheduled to be held with Russian President Vladimir Putin during the G20 Summit in St. Petersburg in September, alluding to Russia’s anti-LGBT law, which was signed by Putin in later June, as among the reasons the meeting was canceled. Obama reiterated those remarks today, stating they believed it was “appropriate for us to take a pause, reassess where it is that Russia’s going, what our core interests are, and calibrate the relationship so that we’re doing things that are good for the United States and, hopefully, good for Russia as well but recognizing that there are just going to be some differences, and we’re not going to be able to completely disguise them.”

“I don’t have a bad personal relationship with Putin,” Obama continued. “When we have conversations, they’re candid. They’re blunt. Oftentimes they’re constructive. I know the press likes to focus on body language, and he’s got that kind of slouch, looking like the bored kid in the back of the classroom. But the truth is, is that when we’re in conversations together, oftentimes it’s very productive.”

Andre Banks, the executive director and co-founder of All Out, which delivered a more than 320,000 signatures calling for a repeal of the Russian law to the IOC in Switzerland earlier this week, applauded the president’s remarks.

“We appreciate President Obama’s strong words opposing Russia’s anti-gay laws and his willingness to speak out against governments that force people to sacrifice their family and sometimes their freedom because of who they are or who they love,” Banks said in a statement. “All Out continues to believe that the 2014 Olympic Games are a perfect opportunity to speak out, rather than walk out. We call on the International Olympic Committee, Olympians, fans, and other governments to follow President Obama’s lead and go public to demand an end to the anti-gay laws.”