Sara Bareilles To Rally The ‘Brave’ to Lincoln Theatre 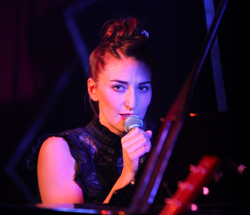 Yesterday, we told you about Janelle Monae. Turns out, she’s not the only talented female singer-songwriter coming to the Lincoln Theatre in October — with tickets going on sale tomorrow, Friday, Aug. 23. There’s also Sara Bareilles, the buoyant pop star touring in support of her appealing new album The Blessed Unrest, which includes her great pop anthem “Brave,” co-written by fellow straight LGBT ally Jack Antonoff of fun. The song is bigger and brighter than Katy Perry’s latest smash self-empowerment anthem “Roar,” and also came first, by a few months — and that fact hasn’t gone unnoticed. In any case, the song is also simply more gratifying, both sonically and thematically, with its message about the happiness that comes from coming out, or at least from being willing to stand out. And then there’s that charming video, with a bunch of folks, Bareilles included, getting their amusing choreographed freak on — being brave as “normal” people look on and criticize them.

Bareilles will be a special performer at the 2013 HRC National Dinner Saturday, Oct. 5, but she’s decided to stick around town and put on another show for those who don’t have tickets to that already sold-out event. (Well, not really: She’s got a show in Boston in between her two D.C. gigs.) But don’t delay: Chances are, her Lincoln Theatre show courtesy of IMP Productions will sell out in advance too. And as you can see from a live performance of The Blessed Unrest track “I Choose You” — or hear from the live version of her first big hit “Love Song” (below), the 33-year-old’s definitely got the goods to put on a good show.

A recording of a meeting with library officials reveals anti-LGBTQ attitudes were the driving force behind the removal of 130 books.

In early January of 2022, one Texas school district superintendent truly dedicated himself to the anti-LGBTQ movement sweeping across American state legislatures, directing librarians in the district to permanently remove roughly 130 books from their shelves -- over 75 percent of which contained LGBTQ characters or themes.

A recording of the meeting obtained by NBC News, ProPublica, and The Texas Tribune revealed the contents of the meeting and the reasoning behind his directive. Glenn, following in line with the arguments many Texas officials have made when banning books, told the librarians he didn’t want kids “reading about how to hook up sexually in our libraries,” whether the book was “about homosexuality or heterosexuality.”