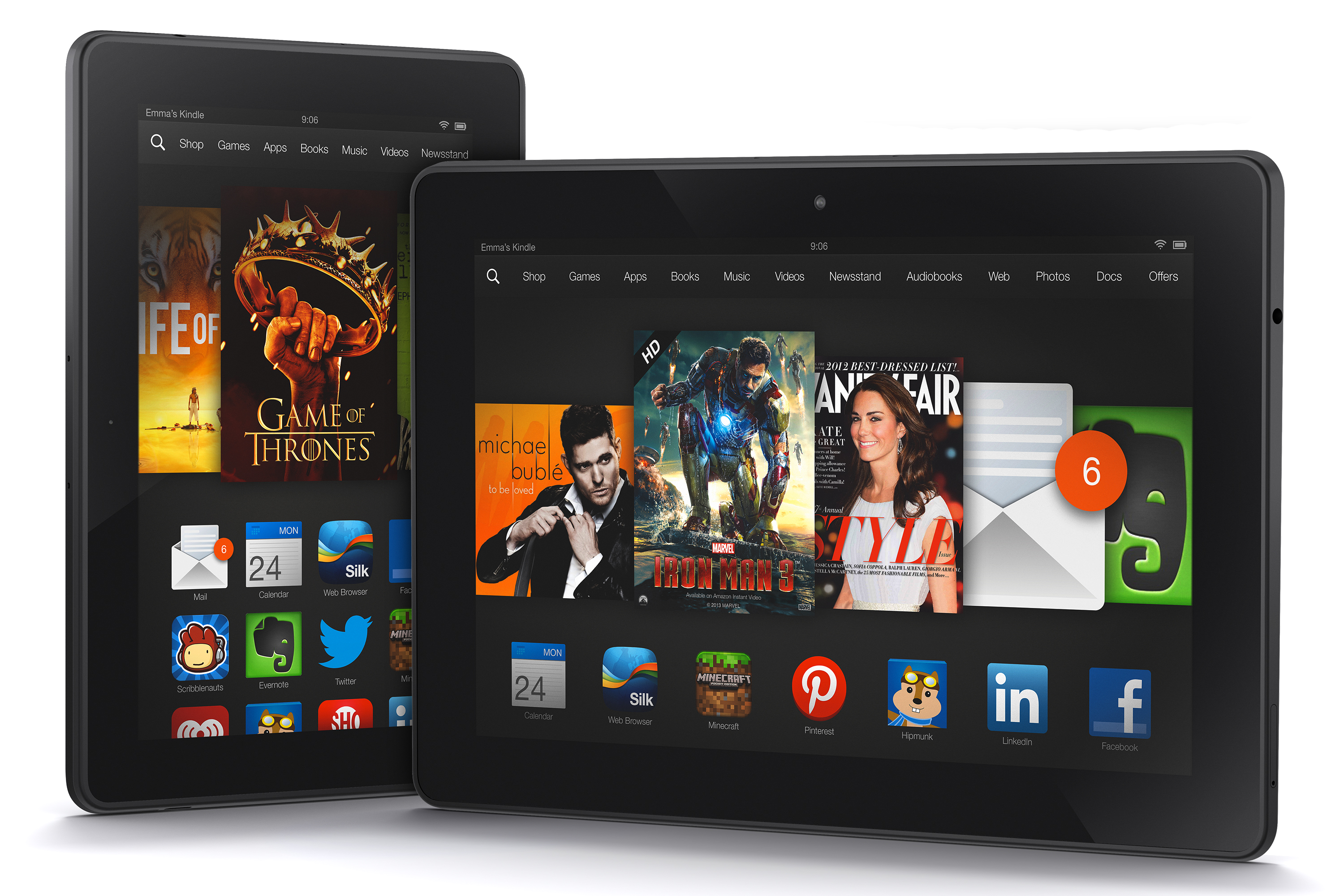 Groanworthy headline aside, Amazon is indeed stoking its Fire tablets, adding some extra hardware fuel and dousing them in drool-worthy specs. Too much?

If you’re one of the majority of tablet users who have ignored Amazon’s highly customized slates, then there’s likely not much here for you, but those who have sat on the fence — or who already own a Fire tablet — will likely be interested to see what Amazon is bringing to the market this holiday season. Meet the Kindle Fire HDX.

Amazon’s latest slates, available in 7- or 8.9-inch form factors, are the company’s answer to the highly-specced threat of the latest Google Nexus 7. The 7-incher has a screen resolution of 1920×1200, directly matching Google’s tablet. The 8.9-inch flagship has an eye-bursting density of 2560×1600 — that’s 339 pixels per inch, compared with a ppi of just 264 on the 9.7-inch iPad. Both offer a new dynamic contrast feature which aims to improve outdoor readability without maxing brightness and ruining battery life. It seems to work, as the 8.9-inch tablet is rated at lasting 12 hours, with that extending to 18 hours in a special reading mode. Subtract one hour from each for the smaller slate.

The new Kindles will be more comfortable to hold, as well, with Amazon putting both on a strict diet, shedding 34 percent of the larger slate’s body weight to a slender 13.2 ounces. The 7-incher is even lighter at an anorexic 10.7 ounces. Both are suitably slim, with the former measuring in at just 0.31″ in depth and a slightly thicker 0.35″ for the 7-inch version.

Anyone adverse to Amazon’s highly customized — basically unrecognizable — build of Android, there’s not much new to love here. No Google Play access, instead it’s all understandably Amazon. Debuting on both slates, though, is the latest update to Amazon’s personalized OS, known as Fire OS. Here, it’s version 3.0, nicknamed Mojito. There’s sadly no rum to be found, but there’s plenty tweaks and updates to make the whole thing run a lot smoother than its predecessors. Designed around pushing content consumption and purchase to the front, it’s a polarizing OS, but Amazon has included several additions to make it more user-friendly. Swipe down from the top and, much like in normal Android, you’ll be presented with quick settings for the usual array of features such as WiFi and auto-rotate. There’s one major feature that many technology-wary users may love, though — Mayday.

Mayday is Amazon’s live user help service. Press the Mayday button, and in under 15 seconds you’ll be connected to a live Amazon tech support person. You’ll be able to see their face, but they cannot see you, only your tablet screen. From here, you can ask them any questions, or request any help that you need. Want suggestions on new TV series? They can help. Can’t figure out why your WiFi won’t connect? They can help — and in a pretty ingenious way. Drawing on your screen, tech support can visually guide you through the process so you can learn and do it yourself, or, if you couldn’t care less, they can simply perform any actions for you as you watch. Need to enter a password? They can pause their stream and disconnect from your screen, giving you privacy. Amazon claims that they have sufficient staff to cope with any demand — though admit that Christmas will be a real test of their support network.

Powering all of this Amazonian goodness is a Snapdragon 800 quad-core processor, the same as that found in the Nexus 7, paired with an Adreno 330 GPU which should help to give the HDX’s impressive gaming performance. The addition of 2GB of RAM will certainly help here.

Enterprise users who have doggedly stuck with the Fire will be pleased to know that VPN support and Mobile Device Management are both here, so you can take your Fire to the office and not feel left out of the tablet fun.

Both versions of Amazon’s HDX slate are available to preorder now, with the 7-inch slate starting at $229 for 16GB of storage, and the 8.9-inch model costing $379 for 16GB. Both are also available with 32 or 64 GB, and both come with support for AT&T or Verizon wireless, though expect to add $100 on to the purchase price to give yourself mobile freedom on either network. Slates should start shipping on October 18, but only for the 7-inch model. Those wanting to start an 8.9-inch Fire will have to wait until November 7. Burn.

Rhuaridh Marr is Metro Weekly's managing editor. He can be reached at rmarr@metroweekly.com.
← Previous Story Touch, Type and Power — Microsoft Covers every base
Next Story → Facebook implements status editing — about ducking time