County clerks at the forefront of marriage battles in two states

By Justin Snow on September 4, 2013 @JustinCSnow 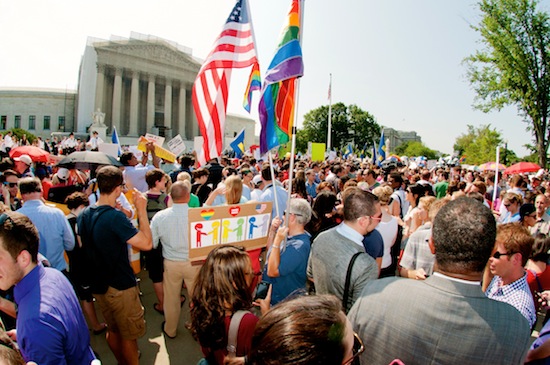 Following the Supreme Court’s sweeping decision striking down the federal government’s definition of marriage as between a man and a woman, county clerks in two states have found themselves on the front lines of the fight for national marriage equality.

In Pennsylvania later today, a state court will hold a hearing as to whether Montgomery County register of wills D. Bruce Hanes violated state law when he began issuing marriage licenses to same-sex couples earlier this summer.

Hanes had issued 164 licenses, 98 of which had been completed and filed, to same-sex couples by the end of business on Tuesday, according to the Associated Press. The Health Department of Republican Gov. Tom Corbett filed a lawsuit against Hanes, arguing his actions upset the uniformity of marriage licenses issued throughout the state.

“I decided to come down on the right side of history and the law,” Hanes told the Philadelphia Inquirer in July after announcing he was willing to grant a marriage license to a same-sex couple that had applied and that he would wish them “all the freedom, independence, happiness, and rights that our commonwealth’s constitution purports to grant to them.”

According to Hanes, prohibiting same-sex couples from marrying was a violation of the state’s equal protection clause. “Some people have said I’ve broken the law, which I may have done,” Hanes said in a recent interview with NBC News. “But I’ve broken an unconstitutional law.”

Hanes’s decision followed that of Pennsylvania Attorney General Kathleen Kane, a Democrat, who announced two weeks after the Supreme Court struck down Section 3 of the Defense of Marriage Act as unconstitutional that she would not defend the state’s law prohibiting same-sex marriage. Pennsylvania is the only Northeastern state that does not permit same-sex marriage nor civil unions for same-sex couples.

The situation in Pennsylvania mirrors one in New Mexico, where a seventh county announced Tuesday plans to begin issuing marriage licenses to same-sex couples. Unlike Pennsylvania, New Mexico has no ban on same-sex marriage, and its marriage laws are vague.

New Mexico is the only state in the nation that does not recognize nor prohibit recognition of same-sex marriages, which has led to a long history of challenges to New Mexico’s ambiguous marriage laws. That’s because of a measure adopted by the state in 1973 known as the Equal Rights Amendment, which removed gender references from countless state statues — including marriage law.

On Feb. 20, 2004, the clerk in Sandoval County, N.M., issued marriage licenses to 64 same-sex couples before ordered to stop by the state attorney general. Since that decision, county clerks have not issued marriage licenses to same-sex couples and the state has been vague about whether state law permits same-sex marriage, leading advocates to take their fight to the courts and Legislature.

The New Mexico Supreme Court, which recently ruled a photographer could not legally deny services to a same-sex couple, is expected to address at least one lawsuit regarding the law. Both Republican Gov. Susana Martinez and Democratic Attorney General Gary King have shown no indication of interfering with actions taken by the various counties.

Opponents of same-sex marriage have decried the actions of clerks in the two states. The National Organization for Marriage described the events in New Mexico as “lawlessness” and “reckless.” But this isn’t the first time clerks or state officials have found themselves pushing the issue of marriage equality into the spotlight.

It was in 2004 that then-San Francisco Mayor Gavin Newsom ordered the city clerk to begin issuing marriage licenses to same-sex couples in a series of events that led to the California Supreme Court legalizing same-sex marriage in 2008, and then voters soon after taking away that right with the approval of Proposition 8. It wasn’t until June 26 of this year that the U.S. Supreme Court returned marriage equality to the nation’s most populous state.