If Equality Virginia has its way, in about a year drivers in the commonwealth will be seeing cars bearing pro-LGBT license plates along Virginia’s roads.

The state’s primary LGBT-rights organization hopes the proposed license plates will prompt discussion of LGBT equality and the lack of protections – in areas ranging from workplace nondiscrimination to marriage – for LGBT people in Virginia. 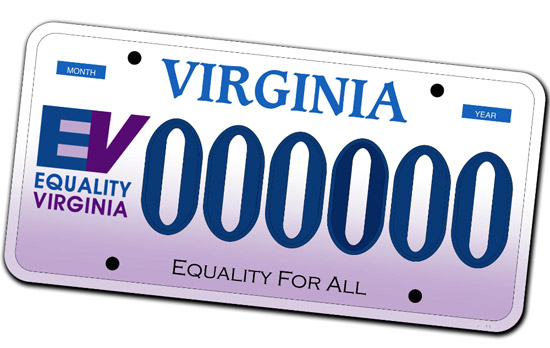 In order for the Equality Virginia-branded plate to become reality, the Department of Motor Vehicles must first receive prepayment from 450 applicants requesting the plate. The plate must then be proposed in legislation, passed by the General Assembly and signed into law by the governor before the plates can go into production. So far, approximately 275 applications have been submitted. Those wishing to customize their plates can pre-register through Equality Virginia’s website at equalityvirginia.org.

The Equality Virginia license plates cost $25, or $35 for those wanting personalized plates. After the first 1,000 sales, $15 from every subsequent plate sold will go to Equality Virginia to help fund its efforts.

James Parrish, the executive director of Equality Virginia, said the idea of creating a license plate had been floated in previous years, but the organization was prompted to take action following a spike in inquiries, particularly after the recent U.S. Supreme Court decision overturning part of the Defense of Marriage Act (DOMA).

”We’ve had an unbelievable response,” Parrish said of requests for an Equality Virginia plate, noting that 200 of those requests were submitted online. He said the organization has been trying to pre-register others at Virginia LGBT Pride events throughout the summer, and has plans to promote the plate at similar upcoming Virginia events in Charlottesville, Roanoke, Richmond and Elkton.

Parrish said that the organization is still tweaking the final design for the plate to make it clear that Equality Virginia is an LGBT-rights organization. He said several legislators have already contacted him expressing interest in serving as chief patron for the bill to allow the production of the license plates, though he said he could not yet reveal any of those legislators’ names.

”It’s not Bob Marshall, I can tell you that much,” Parrish joked, referring to the Prince William County delegate who is one of the leading legislative voices opposing equality for LGBT people.

”Our hope is that when people see it going down the street, the plate will give a boost of confidence and bring a smile to the faces of the LGBT community, as well as show support for equality,” Parrish said. ”This goes along with our position on changing hearts and minds. And we know, despite what happens with our House of Delegates, Virginians support LGBT equality.”

Asked whether the license plate might face opposition, either from the Republican-controlled House of Delegates or from an anti-gay governor, Parrish said he fully expects the next governor to be LGBT-supportive. He said he hopes the bill will be approved quickly, allowing the plate to hit the streets by fall of 2014.

”I think it should be approved by the General Assembly,” Parrish told Metro Weekly. ”Especially because there have been other plates approved like pro-choice, pro-life, tea party plates, all of which are much more political in nature. We don’t see why this wouldn’t be approved as well.”