By Troy Petenbrink on September 1, 2013 @thegaytraveler 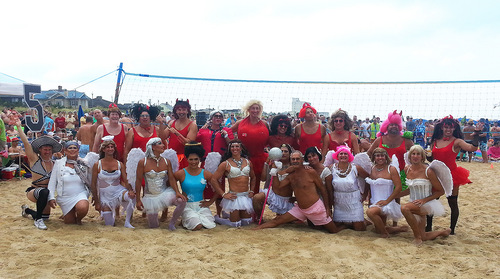 The event has happened every year except in 1990. As described in a 2008 article by Rich Barnett in Letters, a magazine produced by CAMP Rehoboth LGBTcommunity center, “That year, some of you may remember, was the height of the anti-gay sentiment in Rehoboth. ‘Keep Rehoboth a Family Town’ was the rallying cry of then Mayor Hughes and his band of anti-homo homeowners and the fellas felt it best not to play.”

It is hard to image a time that the event was not welcome. In recent years, the event has drawn hundreds of gay and straight spectators, who make in an Labor Day weekend tradition. Its popularity even drew national attention when “Today Show” hosts Kathie Lee Gifford and Hoda Kotb did a special report on the game in 2011.

Today’s game was not a complete disappointment. Attendees where able to see both team — one dressed as “naughty angels” and the other as “devilish divas” — make their grand entrance and perform a welcoming skit. Unfortunately, the weather turned bad before actual play began.

The two teams were able to play later in the afternoon after the rain ended, with the devils defeated the angels.

Rehoboth Beach is located in southern Delaware and is a popular summer vacation destination for LGBT travelers.