E.W. Jackson says he “respects every individual,” but won’t apologize for past anti-gay statements

By John Riley on October 31, 2013 @JohnAndresRiley 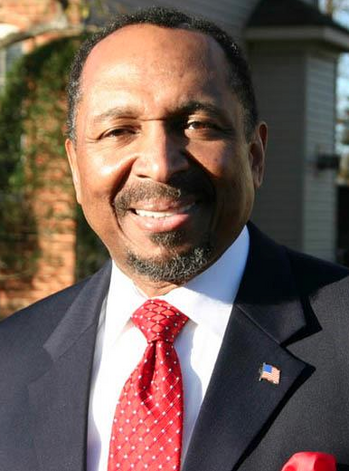 “Well, look, my role as a minister is to teach the Bible. Now the Bible has said some things that people in popular culture don’t particularly like. And I understand that. But that’s not my role as lieutenant governor. My role as lieutenant governor is to serve all the people of Virginia. I’m a person who respects every individual. Look, I make no apologies. I support marriage as the union of one man and one woman. I am pro-life. But I want to talk to people about issues, and try to find common ground, but I’m not going to apologize for being a Christian or being a minister or a Bible-believer.

…I refuse to apologize for being a Bible-believing Christian. There are millions of us all over the Commonwealth of Virginia. No matter how much I’m persecuted for it, I will not apologize for that. But look, believing that marriage is between one man and one woman and having certain moral beliefs is not incompatible with treating all people with respect.“

-E.W. Jackson, in an Oct. 31 interview during an appearance on ABC7’s “NewsTalk with Bruce DePuyt,” in response to a question about prior statements that express anti-LGBT sentiment and whether he could reconcile those statements with the notion of respect. Jackson had claimed in another interview with WUSA 9 that he did not say some of the anti-gay statements attributed to him, and that others have been taken out of context or spun negatively by the mainstream media.

Jackson told host Bruce DePuyt that many of the comments that are perceived as anti-gay were made in the context of Jackson’s role as a minister. But Jackson also said that his role as lieutenant governor, if elected, would be different than his role as a minister.  When DePuyt played a video compliation of anti-gay quotes, put together and posted to YouTube by the liberal-leaning political action committee American Bridge 21st Century, that Jackson had previously made during talk show or radio interviews, Jackson pushed back against DePuyt, claiming that he is the one being persecuted and unfairly attacked, on account of his religious beliefs.

Jackson told DePuyt: “What I resent is that a religious test is being applied, that as a teacher of the Bible, on Sunday mornings and Wednesday evenings, for example, I’m disqualified from serving in public office because of my religious views. That means every minister, every Christian who believes in the Bible, across the Commonwealth of Virginia, all across America, we’re saying you’re second-class citizens, you’re not eligible to serve, because of what you believe, because we ultimately don’t like what your Bible or your God teach.“

Police in San Diego are investigating an attack in a park that left a gay man requiring surgery to his face.

Gersson Saavedra was beaten unconscious by two strangers while walking along the pier at Cesar Chavez park around 9:30 p.m. on Sept. 12.

Saavedra suffered a fractured nose, shattered eye socket, and injuries to his spinal cord during the attack, which is being investigated as an anti-gay hate crime.

Speaking to NBC San Diego, Saavedra said he fell behind his friends when two men approached him and asked him for a lighter.

While Saavedra remembers little of what followed, his friends told him that the men started yelling homophobic slurs, including "faggot."

Bobby Ledogar says he was targeted by various investigations alleging wrongdoing after standing up for victim of bullying and harassment.

A U.S. marshal claims he was fired -- and thus denied his full retirement benefits -- for defending a lesbian deputy who was being relentlessly harassed by her fellow marshals.

Bobby Ledogar, a former Supervisory Deputy U.S. Marshal for the Eastern District of New York, says that the U.S. Marshals Service launched four internal affairs investigations against him, one of which led to his termination just 70 days away from retirement. Now, he's appealing his termination and is hoping to recoup his pension, claiming he was fired in retaliation for standing up for the deputy in question, U.S. Marshal Dawn Mahoney.