Extension of same-sex military benefits off to rough start 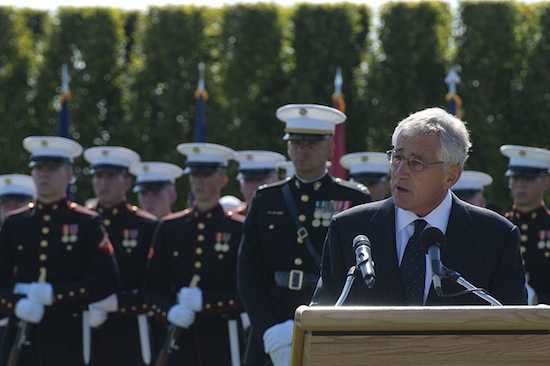 The Pentagon’s extension of benefits to same-sex military families continues to face setbacks and roadblocks one month after the updated policy was implemented, now with lawmakers on Capitol Hill urging the Obama administration to act.

In a Sept. 30 letter to Defense Secretary Chuck Hagel sent by Rep. Adam Smith (D-Wash.) and Sen. Carl Levin (D-Mich.), the the two most senior Democrats on the House and Senate Armed Services Committees urged Hagel to issue further guidance as at least four states continue to block the processing of benefits for any member of the National Guard with a same-sex spouse.

“We urge you to issue further guidance on this matter, reaffirming that all married military couples must be treated equally, and clarifying that state National Guards, because they are funded in large part by federal tax dollars, cannot choose to ignore this order by denying some lawfully married military couples equal access to the federal benefits to white they are entitled,” the two Democrats wrote.

The letter comes as there has been little federal response to the four states blocking benefits — Oklahoma, Mississippi, Louisiana and Texas, where Lambda Legal has intervened signaling the potential of a lawsuit. All four states are run by socially conservative Republican governors and have determined same-sex military families must go to a federal facility to enroll in the Defense Enrollment Eligibility Reporting System (DEERS) rather than a state installation because of their respective bans on same-sex marriage.

And while they appear to be in defiance of an order from the secretary of defense, the Pentagon and the White House have been mum on what, if any, response it will issue.

Defense Department spokesman Lt. Cmdr. Nate Christensen declined to comment on Hagel’s correspondence, but has previously told Metro Weekly that “all Federal Military installations will issue IDs to all those who provide a valid marriage certificate from a jurisdiction that recognizes same-sex marriage.”

Speaking to reporters last month, White House press secretary Jay Carney said he did not know if President Obama was aware of the situation in those four states.

Meanwhile, the Los Angels Times reported Wednesday that gay members of the military are “running into widespread obstacles” in attempts to take advantage of a new Obama administration policy enacted in August that provides gay servicemembers wishing to marry up to 10 days leave to travel to those jurisdictions that permit same-sex marriage.

“We recognize that same-sex couples not stationed in a jurisdiction that permits same-sex marriage would have to travel to another jurisdiction to marry,” Hagel wrote in an Aug. 13 memo. “Accordingly, the Department will implement policies to allow military personnel in such a relationship non-chargeable leave for the purpose of traveling to a jurisdiction where such a marriage may occur. This will provide accelerated access to the full range of benefits offered to married military couples throughout the Department and help level the playing field between opposite-sex and same-sex couples seeking to be married.”

However, according to the Los Angeles Times, the Marines are the only branch of the military to have issued final guidelines on the policy, with Army and Navy having issued interim directives and the Air Force having issued no instructions. The Pentagon is expected to issue further guidance in the coming weeks.

“The department’s policy is that, as operational requirements permit, commanding officers MAY grant an administrative absence to service members that are assigned to duty stations located more than 100 miles from a jurisdiction that allows the couple to be married,” Christensen said in an email to Metro Weekly.

The various issues facing the Pentagon following the extension of benefits signify the widespread policy changes that have been undertaken by the Obama administration after the Supreme Court’s June decision striking down Section 3 of the Defense of Marriage Act defining marriage as between a man and a woman.

However, advocates say there can be no delay in resolving these problems.

“The resistance on the part of several state National Guards to the extension of military benefits to the same-sex spouses of members of the National Guard cannot go unaddressed,” Ian Thompson, legislative representative for the American Civil Liberties Union, said in a statement. “The Department of Defense needs to reaffirm that, consistent with the Supreme Court’s ruling in U.S. v. Windsor, all married military couples must be treated equally, and state National Guards cannot choose to ignore this order by denying some lawfully married couples equal access to the federal benefits to which they are entitled.”