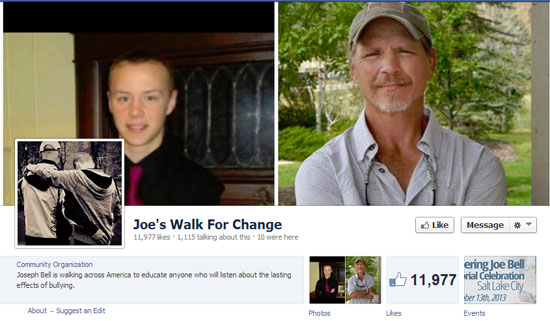 “It’s wrong, you know, we can’t have this anymore in our society…. Feeling like I wanted to die myself, and knowing I couldn’t — I had more family — I needed to fight back. And so, it come to me to walk … trying to educate people on acceptance. The bullying comes from not accepting people for who they are…. We have lots of teenagers right now — it’s an epidemic. They’re taking their lives.“

That’s what Joe Bell told a Denver, CO TV station in September during his “Walk for Change.” Bell’s 15-year-old son, Jadin Bell, died in February after attempting suicide by hanging himself at an elementary school playground. It’s reported that Jadin had complained of being bullied at high school for being openly gay.

According to a family friend’s website, Joe Bell began his walk in April, and he had expected to travel from Oregon to New York. “He planned to walk across the country to tell his son’s story to as many people as he could.”

Tragically, Bell was struck and killed while walking this past Wednesday evening. A blog post on his website reads:

”It is with great sadness that we share the unfortunate news of Joe Bell’s untimely passing. Joe was hit and killed by a semi-tractor while walking eastbound on the shoulder of Highway 40 about 20 miles northwest of Kit Carson, Colorado. The collision happened around 5:10pm on October 9, 2013 during Joe’s nationwide walk from his hometown in La Grande, Oregon to New York City.

”Joe was hit in a rural area of Cheyenne County while on his walk from Denver to Wichita, Kansas and was pronounced dead at the scene. He is survived by his wife, Lola, and by three other children; Amber Lynn, Dustin and Joseph. The 49-year-old semi driver was uninjured. Colorado State Patrol says the driver may have fallen asleep at the wheel. He has been cited with careless driving resulting in death.”

A Facebook page dedicated to Bell’s effort showed photos from a Friday night memorial held in remembrance. OregonLive reposted an email from Sheriff Tom Nestor who had met Jadin’s father just one day before the accident. It read, in part:

“I generally don’t share personal stories with people I just meet but Joe was different and could tell right away he was a good man. I talked with Joe about my oldest son who is also gay. Joe talked to me about accepting my son without question because he was born that way and was not a choice.

“Joe shared his personal story in detail and explained to me what the walk meant to him. Joe talked to me about all the schools and churches he talked at….

”He may not have reached his destination but I feel like he completed his mission. He did in fact made a change!”