“We talk about transgender, I have a former stallion which is now a gelding, because stallions get very aggressive. He wasn’t trying to be a girl, we just made him into a less aggressive male.“ 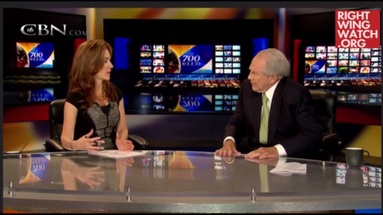 Pat Robertson — host of the 700 Club and founder of the Christian Broadcasting Network — after having his co-host incorrectly explain what transgender means, compares transgender people to his castrated stallion, as reported by RightWingWatch.

Earlier in the broadcast, he launched into a diatribe against the transgender and gay rights groups and support groups who fight for equal rights and recognition from their peers.

“Why are we exposed to this stuff? They are driving the agenda, driving everybody crazy, all this sexual identity, sexual politics, ‘Mommy Has Two Mommies’ and all that stuff, it’s a tiny fringe but they seem to have control of the levers of power in the media and especially in Hollywood. But it’s insane. I just cannot believe that the normal people in America, the people who want to just live their lives can’t be allowed to do it without having this stuff imposed on them constantly. You’ve explained to me, I’m not sure we know yet.”

However, Robertson did say “I am not opposed to somebody who feels that they’re a boy trapped in a girl’s body and they want a sex change operation. I think that happens, and I see nothing wrong with it.”

Where Robertson seems to be confused is with pre-operation transgender people who are living and dressing as their preferred gender, continuing with “This whole business about transgenders, you say they got boy parts but they want to go to the girl’s restroom? I mean, that’s absurd.“

The full clip is embedded for you below.

Rhuaridh Marr is Metro Weekly's managing editor. He can be reached at rmarr@metroweekly.com.
← Previous Story Study shows “It Gets Better” not as effective for bisexual teens
Next Story → Oregon dad killed while honoring bullied, gay son with cross-country walk