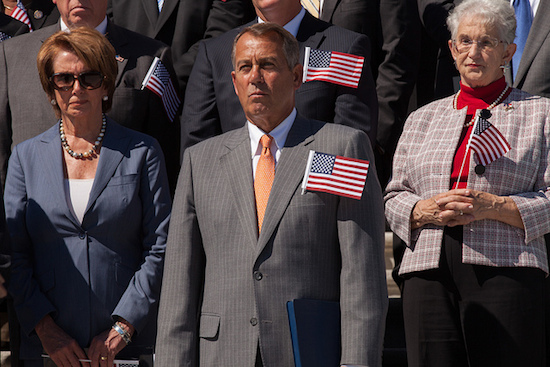 For the first time in 17 years, a landmark piece of legislation that would prohibit employers from anti-LGBT workplace discrimination is on its way to a vote by the U.S. Senate.

The latest movement on ENDA comes after the bill secured the support of every Democratic senator earlier this week. In recent days, ENDA’s three Democratic holdouts in the Senate — Bill Nelson (Fla.), Mark Pryor (Ark.) and Joe Manchin (W.V.) — all signaled their support for the bill.

“There’s no way that I could ever not support something that basically bans discrimination,” Manchin told The New York Times. “There’s no way. It’s just a fundamental right.”

Advocates had pointed to the support of those three Democratic senators as being crucial to swaying a key number of Republican senators into voting for ENDA. The bill is co-sponsored by Republican Sens. Susan Collins (Maine) and Mark Kirk (Ill.). Sens. Lisa Murkowski (Alaska) and Orin Hatch (Utah) both voted for ENDA in committee.

Following the swearing in today of Cory Booker as the new senator from New Jersey, ENDA has 59 of the 60 votes necessary to vote for the motion to proceed to debate.

“We have a chance next week to pass a landmark civil rights bill that will enshrine in law an issue of fundamental fairness: no one should be fired for their sexual orientation or gender identity,” said Oregon Sen. Jeff Merkley, the lead sponsor of ENDA, in a statement. “Discrimination is just plain wrong. Everyone should have the freedom to work hard and earn a living. I am pleased that the U.S. Senate will consider this fundamental issue of equality under the law.”

Advocates remain focused on a fevered push to lobby a handful of Republican senators they believe can be swayed to vote in their favor. The Human Rights Campaign has made more than 200,000 constituent contacts in states with senators who could potentially vote in favor of ENDA, including in New Hampshire, West Virginia, Ohio, Arizona, Arkansas, Nevada and Pennsylvania.

It was Sept. 10, 1996, that ENDA came one vote shy of passage in the U.S. Senate, just hours after the same body overwhelmingly approved the Defense of Marriage Act, forbidding federal recognition of same-sex marriages. When the Senate takes up the bill this time, the vote is expected to go differently. It will also mark the first time a version of ENDA that includes both sexual orientation and gender identity protections heads to the floor of either chamber of Congress. Although the Democratic majority in the House passed ENDA in 2007, it did not contain protections for transgender Americans.

Yet even if ENDA secures Senate approval in the coming days, there remains no clear path forward in the Republican-controlled House of Representatives. Although ENDA gained its fifth Republican and 194th co-sponsor in the House after Rep. Chris Gibson (N.Y.), who is being challenged for re-election by out candidate Sean Eldridge, attached his name to the bill yesterday, Republican leadership could refuse to allow the bill to be brought to the House floor.

Speaking to reporters yesterday, Minority Leader Nancy Pelosi pointed to tactics used to force the House leadership’s hand to bring the Violence Against Women Act (VAWA), which included LGBT protections, to the floor earlier this year as a potential strategy on ENDA. Stating Democrats made the issue “too hot to handle” in public, Pelosi said she would hope a similar situation would play out with ENDA.

“I would think it would be ‘once burned, twice learned,’ and that they would, shall we say, save some time by taking it right to our committee and to the floor,” Pelosi said. “Ending discrimination is what we are all about as Americans, and we should not have discrimination in the workplace because of gender identity.”