By John Riley on November 5, 2013 @JohnAndresRiley

Voters of all stripes flocked to polling places in Virginia Tuesday to select the next governor who will lead the commonwealth, as well as voting for lieutenant govenor, attorney general and other lower-ticket races. 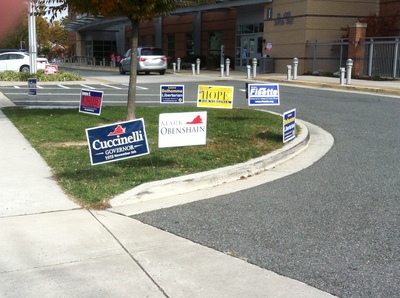 Tuesday’s most-watched contest was the governor’s race, which pitted Republican Attorney General Ken Cuccinelli, known for his socially conservative stances, including opposition to LGBT rights, against Democrat Terry McAuliffe, the former head of the Democratic National Committee. But most voters in the close-in D.C. suburbs polled by Metro Weekly, even those who voted for Cuccinelli, said they supported LGBT rights, specifically a bill that would make it illegal to discriminate against LGBT people in state employment because of their sexual orientaton or gender identity. Such a bill passed the Virginia Senate earlier this year, 24-16, but was killed in committee in the Republican-controlled House of Delegates.

Brian McAlpin was among a steady stream of voters who arrived at the George Mason University precinct in the Virginia Square neighborhood of Arlington County early Tuesday. McAlpin  said he voted a straight Democratic ticket, and that he was primarily compelled to vote because of social issues, even though he felt that most of the ads that focused on those issues were overwhelmingly negative.

Lyman said she felt the governor’s race had significantly overshadowed other critical races, largely because of the personalities involved in the race. Lyman cited social issues as her primary motivation for voting for Democrats Tuesday. Both McAlpin and Lyman said they would be more likely to support a candidate for the General Assembly who supported a bill prohibiting employment discrimination.

Jason Howell said he was motivated to vote Tuesday around issues like traffic, taxes, and how Virginia might move forward economically, given its large number of government employees. Although he declined to share any of his ballot picks, he did say he voted his conscience.

“It’s really impotant that I vote and I’ve paid attention to the politics,” Howell said. “It’s better to vote for someone, not against someone.”

When asked whether he would be more likely or less likely to support a politician who supported nondiscrimination legislation, Howell said, “If that’s what it takes for people to play by the rules, so be it.”

Beth Burke voted for her first time in Virginia Tuesday, saying she was motivated by her support for marriage equality, LGBT rights and Obamacare, as well as opposition to Cuccinelli.

At Washington-Lee High School in the Arlington’s Clarendon neighborhood, voter “B.M.” who declined to give his full name, said he voted for Cuccinelli and the rest of the Republican ticket because of opposition to the Affordable Care ACT (aka Obamacare), opposition to a countywide ballot measure – opposed by both Democrats and Republicans – that would have created a housing authority, and fears about taxes. But B.M. said he had no problem with a bill that would prohibit discrimination in public or state employment based on sexual orientation or gender identity rather than on ability to do a job.

“Any sort of bias in public employment is unacceptable,” he said.

Judy Sheahan, voting at Washington-Lee, said she was “in full favor” of nondiscrimination legislation, noting that several counties have already taken their own steps to prohibit employment discrimination. Sheahan said she voted for Terry McAuliffe due to Cuccinelli’s views on social issues. She added that several of the races for local offices were “lost in the shuffle” due to the closely watched governor’s race.

Todd M., who declined to give his last name, owner of a small tech company, said he wanted to vote for someone who was pro-small business and socially liberal, but felt he did not have a good choice. When asked if he’d considered Robert Sarvis, the Libertarian gubernatioral candidate, Todd said he had voted for McAuliffe. While adding that he’d be likely to vote for a candidate favoring nondiscrimination legislation, Todd said he’d prefer social issues not be part of the debate.

“I’d rather we didn’t focus on those topics,” he said. “I would rather it would just be focused on other, more important issues.” While bypassing Sarvis, Todd said he had voted for Libertarian candidate Laura Delhomme for the Virginia House of Delegates, saying he was impressed with her stances on the issues. Delhomme is a supporter of LGBT rights, including marriage equality.

As of 1 p.m. Tuesday, 498 people had voted at Washington-Lee High School, according to volunteer poll workers. Elsewhere in Virginia, voters told Metro Weekly that turnout at their respective polling places ranged from “light” to “steady.”

Grant Cleveland, of Sterling, was third in line when he arrived at 6:15 a.m. at the Park View High School precinct, but noted that he was No. 13 at the electronic voting machine. Joe Heidenreich, of Fairfax County, voted at the Oak Marr Recreation Center in Oakton at 6:20 a.m. and said that about 30 people were in line ahead of him. He said several of those people were upset because the precinct was using paper ballots instead of electronic machines. Heidenreich added the optical scanner used to scan the paper ballots was broken when he voted, though poll workers resolved the problem.

Check back at MetroWeekly.com for ongoing coverage of the Virginia elections.

[Signs outside a polling place in Arlington. (Photo by John Riley)]