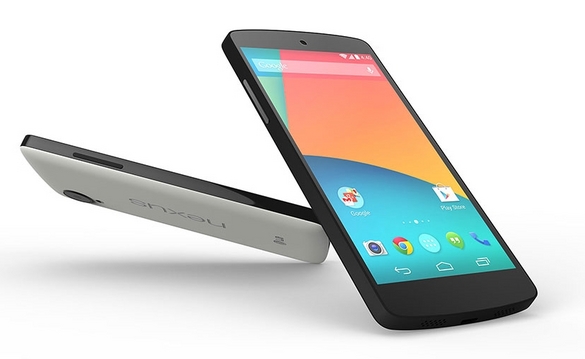 Yesterday, Google launched the latest iteration of its Nexus smartphone. Designed by Google and LG, it aims to offer the purest Android experience possible, providing users the latest updates faster than other handsets and removing the customized skins and apps of phones such as Samsung’s Galaxy S4 or HTC’s One.

The Nexus 5 brings a raft of improvements over its predecessor, the Nexus 4. Out goes the glass build, in comes a “silky” all-plastic construction — likely to remove the worry many Nexus 4 owners had regarding dropping and smashing their phones. Externally, there’s a 4.95-inch, IPS 1080p display, with 445ppi, coated in Corning’s light but tough Gorilla Glass 3. The Nexus 5 is under 8.6mm thin, and weighs 4.6 ounces. On the back, a new vertical Nexus logo takes pride of place, where it’s joined by an optically-stabled 8-megapixel camera with LED flash and Google’s new HDR+ mode — which should combine with the optical image stabilization to offer dramatically better images across all lighting scenarios — and is complimented by a 1.3MP front-facing shooter. The sides are naked save for ceramic power and volume buttons. 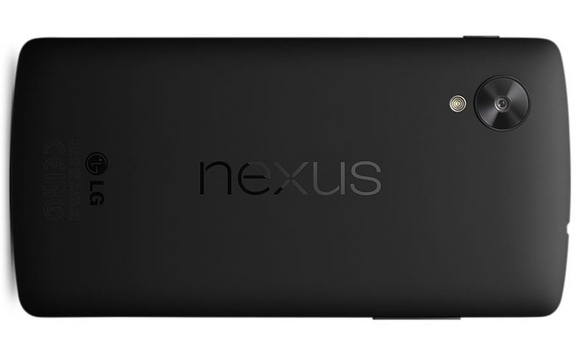 Internally, however, is where the real power lies. The Nexus 5 runs on Qualcomm’s Snapdragon 800 quad-core processor, clocked at 2.26GHz and, paired with an Adreno 330 GPU, should offer blisteringly fast performance. This is due to the completely naked build of Android the Nexus 5 is running — a build unique in that it is the all new Android 4.4, also known as KitKat (more on that later). Further specs include dual-band WiFi, Bluetooth 4.0, NFC, a 2,399 mAh battery that promises 8.5 hours of continuous internet browsing over WiFi — though charging will be much easier thanks to built-in wireless charging. Storage is 16 or 32GB and RAM clocks in at 2GB.

The Nexus 5 includes 4G and LTE bands, which will allow it to work on every major carrier — including AT&T, T-Mobile and Sprint. Verizon is the only network confirmed to be unsupported at the moment. 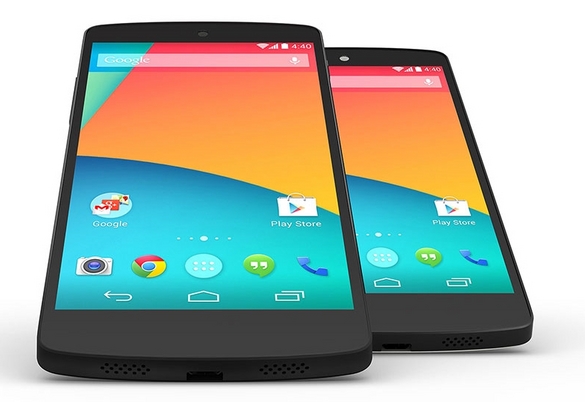 Android 4.4 KitKat, the latest update to Google’s all-conquering OS, brings a host of new features. First is voice-activation, just say “Ok Google” to activate Google’s speech-recognition service to search, send messages, get directions or play music. That music will look great on the lock screen, which now displays album art (just like Windows Phone 8) and playback controls. An all-new immersive mode hides OS elements, including the on-screen navigation buttons and status bar, when not needed — such as while reading a book, watching a film or playing a game — with the ability to bring them back with a swipe from the edge of the screen. Memory in KitKat is now optimized for even faster multitasking, which should also help budget and mid-tier phones perform better on limited hardware. An all-new dialer prioritizes contacts to present your most-called people first, with the ability to search through contacts and businesses on your phone and online. Caller ID is improved, displaying information for any number calling — if it isn’t recognized on your phone, Android will search online through business to find a match and let you know who is trying to reach you.

Android’s messaging app is gone, replaced by Hangouts which now handles SMS. Hangouts has been updated to support greater sharing options — including GIFs, which is excellent for those addicted to memes. Another update for text addicts is system-wide support for emoji, something iOS and Windows Phone users have enjoyed for a while now. Power users are also catered for, with system-wide wireless printing supported, the ability to save files to the cloud — Google Drive and other services are supported — and the ability to create and edit documents including powerpoints and presentations. There’s a bunch of other, smaller improvements, too, available to read here.

What’s the biggest selling point of the Nexus 5? Price. Google is charging just $349 for the 16GB model in black or white, and $399 for a 32GB model with the same color options. That’s off-contract, by the way.

Tempted? Well, you may be out of luck. The Nexus 5 sold out within minutes of Google making the page available on its online Play store, with it currently estimating the next batch of handsets to be arriving in three to four weeks. Outside of Google Play? T-mobile will carry the handset, but are only allowing pre-registering for information, and a promised launch before the holidays. Sprint is launching the device on November 8, for $150 on a two-year contract with unlimited data for life. AT&T will support the Nexus 5, but won’t be offering it for sale, and Verizon will neither support nor sell the device. Outside of carriers, Best Buy and Radioshack will be carrying the Nexus 5, and Amazon will soon have it for sale.

For the moment, however, if you’re tempted, it’s going to be a bit of a waiting game to get the Nexus 5 at its bargain basement price — especially given that price is for a phone that can rival and best much more expensive handsets.

The Nexus 5 is available to order from Google.