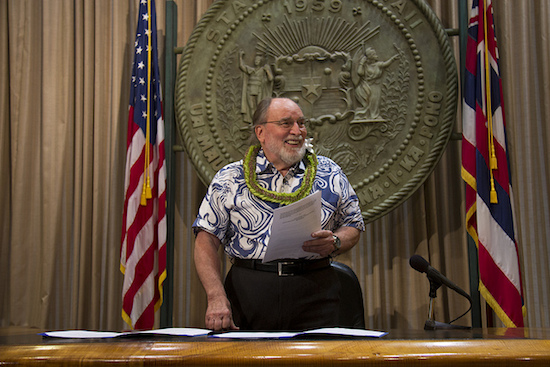 The Hawaii state Senate voted 19-4 Tuesday to recognize same-sex couples’ right to marry, all but legalizing marriage equality in the Aloha State.

The Hawaii state Senate approved a marriage-equality bill that was amended and passed with a 30-19 vote by the state House of Representatives Friday night after 56 hours of public testimony over five days. Gov. Neil Abercrombie (D), who called the state Legislature back for a special session to consider same-sex marriage legislation after the Supreme Court struck down Section 3 of the Defense of Marriage Act in June, is expected to sign the bill into law as soon as tomorrow. With Abercrombie’s signature, marriage licenses will begin being issued to same-sex couples as early as Dec. 2.

The amended bill protects clergy from having to perform weddings for same-sex couples and religious organizations from having to provide goods, services and facilities for same-sex weddings. The state Senate previously approved a similar bill 20-4 late last month, and today’s vote comes two contentious weeks after the special session began on Oct. 28 to consider the bill.

The Hawaii Legislature is the second state legislature in the past week to vote to legalize same-sex marriage. On Nov. 5, Illinois lawmakers approved marriage-equality legislation that is expected to be signed into law by Gov. Pat Quinn (D) later this month. When those bills are signed into law, Hawaii and Illinois will become the 15th and 16th states, plus D.C., to grant same-sex couples the right to marry. Last month, New Jersey became the 14th marriage-equality state after Gov. Chris Christie (R) dropped his appeal of a state court ruling legalizing same-sex marriage.

The passage of same-sex marriage legislation in Hawaii is of particular significance, and brings the fight full circle after two decades of debate. Hawaii is considered the original battleground of the marriage-equality movement. It was 20 years ago in 1993 that a lawsuit was filed on behalf of three same-sex couples seeking marriage rights, sparking political backlash across the country. With the Hawaii Supreme Court giving serious consideration to legalizing same-sex marriage in Hawaii, Congress approved and President Bill Clinton signed into law the Defense of Marriage Act in 1996. Hawaii voters approved a constitutional amendment in 1998 giving state lawmakers the power to define marriage as between a man and a woman. Civil unions were approved in 2011.

The lone Republican in the state Senate, Sam Slom, spoke at length about his opposition to the bill, arguing it had been rushed through the Legislature. Slom alleged the bill would lead to “same-sex and non-same-sex hospitals.” When the gallery broke out in laughter at the suggestion, Slom urged them to come back in four years. Slom also said the day was only historic because of the date itself: 11/12/13.

Before the Senate voted on final passage today, Clayton Hee, the Democratic senator leading the charge in the upper chamber to approve marriage-equality legislation, read aloud a letter he received from Edie Windsor. Windsor, the elderly lesbian widow who sued the federal government over DOMA and won, urged Hee to do whatever it takes to get the bill passed. To fail, Windsor wrote, would not only be a loss for Hawaii but the rest of the country, “since we have to keep building momentum for full equality state, by state, by state.”

President Barack Obama, who was born in Hawaii, applauded the passage of the bill.

“Whenever freedom and equality are affirmed, our country becomes stronger. By giving loving gay and lesbian couples the right to marry if they choose, Hawaii exemplifies the values we hold dear as a nation,” Obama said in a statement. “I’ve always been proud to have been born in Hawaii, and today’s vote makes me even prouder. And Michelle and I extend our best wishes to all those in Hawaii whose families will now be now given the security and respect they deserve.”

Following the approval of marriage-equality legislation last week by the Illinois General Assembly — a body in which Obama served — the president said he was “overjoyed” by the bill’s passage.

[Editor’s Note: This story has been updated to include a statement from President Obama.]