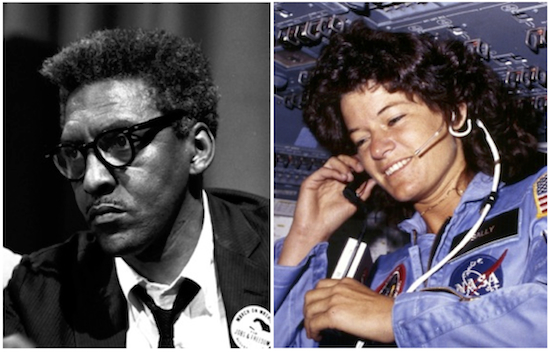 Accepting the Presidential Medal of Freedom on their behalf were Rustin’s partner, Walter Naegle, and Ride’s partner, Tam O’Shaughnessy. Rustin and Ride were among 16 honorees, who included former President Bill Clinton and Oprah Winfrey, to be awarded the medal first established by President John F. Kennedy 50 years ago.

“As the first American woman in space, Sally didn’t just break the stratospheric glass ceiling, she blasted through it,” Obama said of Ride. “And when she came back to Earth, she devoted her life to helping girls excel in fields like math, science and engineering. ‘Young girls need to see role models,’ she said, ‘you can’t be what you can’t see.’ Today, our daughters — including Malia and Sasha — can set their sights a little bit higher because Sally Ride showed them the way.”

Ride, who became the first American woman to travel to space in 1983, died in July 2012 after a 17-month battle with pancreatic cancer. Ride devoted much of her life to advancing science education and the U.S. space program.

For Rustin, who died in 1987, Obama said final recognition for his role in the civil rights movement was part of a broader struggle for equality.

“For decades, this great leader, often at Dr. King’s side, was denied his rightful place in history because he was openly gay,” Obama said. “No medal can change that, but today, we honor Bayard Rustin’s memory by taking our place in his march towards true equality, no matter who we are or who we love.”

Rustin was an advisor to Martin Luther King Jr., helped organize the early “freedom rides” and played a key role in organizing the 1963 March on Washington.

For Naegle and those who have sought to advance Rustin’s legacy, today was a day they were never sure would come.

“There are quite a number of us who have been working over the last 26 years since Bayard died to lead to this day,” Naegle told reporters after the ceremony. “Our motivation was really to get him into the history books, to get people to know who he was, and really to work to perpetuate the values he stood for and to carry on the work because the work is not finished.”

Naegle said when he and Rustin were living in New York City they bucked societal norms not only as a gay couple, but as an interracial couple with a significant age difference. “When Bayard and I were together we didn’t really think about some of these things. We were just very happy,” he said.

“Bayard took a lot of hits in his life,” an emotional Naegle continued. “But he always got back up, went back into the fight.”

“The real legacy or lesson to be learned from Bayard is you don’t give up just because you get knocked down a couple of times. You get back up and get back into the ring. And that’s what he did, he was doing that his whole life,” he added. “You have to keep pushing forward.” 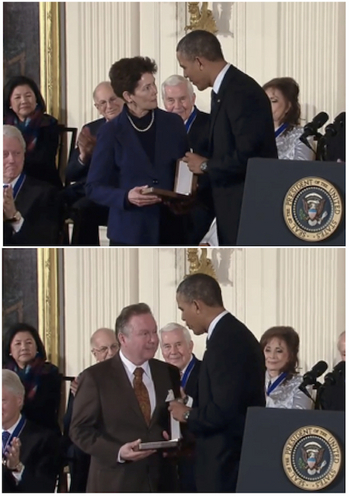 Naegle and O’Shaughnessy, who had never met before, were alphabetically seated next to each other during the ceremony presenting a resonant image. Both said they believed their presence as the gay partners of two Americans being awarded the nation’s highest civilian honor would not go unnoticed.

“I think having Walter and me onstage for our partners sends a huge message to the world and that feels good,” O’Shaughnessy said.

Ride’s sexual orientation only became public after her death, in her obituary written by O’Shaughnessy. The former science teacher, who helped Ride found Sally Ride Science in 2001, said it was a conscious decision to make their personal life known to the world.

“I wanted to do a celebration of her life and I realized, ‘Who am I to the world?,'” O’Shaughnessy said. “We were very open with family and friends and then very private — sort of very private — with everybody else.”

Ride told O’Shaughnessy about a week before her death she wanted her to decide how to deal with things. “I wanted to live honestly and openly and I thought it was the right thing for her legacy and her integrity,” O’Shaughnessy said of her decision.

“I wish Sally was around because since she passed away about 14 months ago the world has changed and our country has changed in very big ways,” she said. “For me personally, I just feel like I can breathe better, I can look people in the eye a little straighter and it just feels good to be honest and who you are. I think that would’ve been wonderful for Sally too. Sally always was herself, but not being completely out there with who you are affects some part of you in some way.”

Although the 27 years Ride and O’Shaughnessy spent together were largely hidden from public view, O’Shaughnessy said she feels it is important to do her share for the community that she is a part of but has “never really done very much for.” Yesterday, O’Shaughnessy paid her first visit to the Human Rights Campaign.

“Now people know Sally was a gay human being, had a committed relationship with another woman, and by and large people don’t care. What they care about was she was the first female astronaut and did it with such grace and then took her celebrity and did wonderful things for science education in our country,” O’Shaughnessy said. “Sally was such a hero to people and I think it’s a big deal that we were honest and participating in something like this — it’s a good feeling. I feel more a part of our country.”