About 70 people, lit candles in hand, gathered Sunday evening at the ”Pillar of Fire,” a sculpture at 14th and S Streets NW that marks the location of the first Whitman-Walker Clinic – now Whitman-Walker Health – D.C.’s front line at the dawn the AIDS epidemic and beyond.

World AIDS Day, held annually Dec. 1 since 1988, this year emphasized ”Shared Responsibility: Strengthening Results for an AIDS-Free Generation,” a theme underscored by D.C. Mayor Vincent Gray (D), echoing statements he made when the District became the first U.S. city in 22 years to host the XIX International AIDS Conference in June 2012. 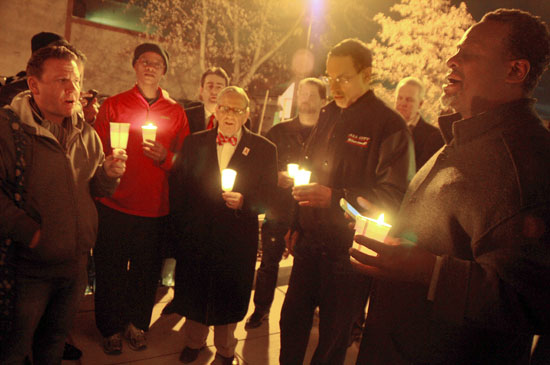 ”The day is coming, ladies and gentlemen, when we will have eradicated the infection and eradicated full-blown AIDS in our society, and we want to be the first to do that, here in the District of Columbia,” Gray said, noting that the District’s HIV-infection rate, while still more than twice the rate considered to be an epidemic, has dropped from 3 percent to 2.4 percent due to efforts by District health officials and community health centers specializing in HIV/AIDS care like Whitman-Walker Health, to encourage people to get tested and seek treatment. ”We are going in the right direction.”

Councilmembers Tommy Wells (D-Ward 6), David Grosso (I-At large) and Jim Graham (D-Ward 1) were among the local officials attending the vigil. Graham, who served as the executive director of the Whitman-Walker Clinic from 1984 to 1999, eulogized the former clients and health workers – some of whom were also infected with the virus – who had worked at the clinic and dedicated their lives to serving those less fortunate than themselves and fighting AIDS.

”It’s always interesting to me … that World AIDS Day is celebrated a couple of days after Thanksgiving, when we’re all so grateful for so many blessings in our lives,” Graham said, extending his thanks to several of the current employees of Whitman-Walker who dotted the crowd. ”I know I am grateful for Whitman-Walker Health, and everything that is going on every single day here.”

Whitman-Walker Health’s Executive Director Don Blanchon tried to rally those in attendance to reach out to those who could be at risk of infection by encouraging them to know their HIV status and provide support for those who may be out of the reach of places like Whitman-Walker.

”On World AIDS Day, we think globally, obviously, but I want you to act locally,” Blanchon said. ”And I mean that: Get tested, know your status, practice safe sex, and one of the many things you can do to help us right now … is take the effort to reach out to one human being in your life, and bring them in to get tested. There’s nothing more important than knowing your status. And if you’re living with HIV, stay in treatment, come and see us. We’re absolutely there when you need it.”

Near the close of the candlelight vigil, Rabbi Laurie Green of Bet Mishpachah, a local LGBT Jewish congregation, led the group in a short prayer and lighting of a menorah to celebrate the fifth day of Hanukkah. Following the menorah lighting, attendees were invited to speak aloud names of those lost to HIV/AIDS over the years. Rev. Courtenay Miller, the senior pastor of the Norbeck Communty Church in Silver Spring, Md., who also offered prayers throughout the vigil, then led the crowd in singing the first verse of ”Amazing Grace,” with the last notes echoing in the dark night air as the candles were extinguished and the attendees went their separate ways.