By John Riley on December 23, 2013 @JohnAndresRiley 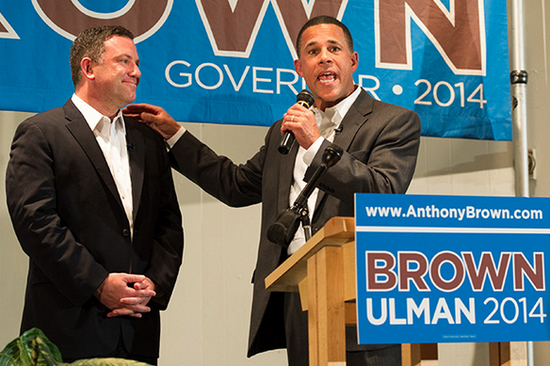 Equality Maryland PAC, the political action committee for the Free State’s major LGBT right organization, issued a list of endorsements for the 2014 election season, throwing its support to several General Assembly incumbents who have established themselves as strong allies for the LGBT movement, as well as the ticket of Lt. Gov. Anthony Brown and his running mate, Howard County Executive Ken Ulman, in their campaign for governor and lieutenant governor, respectively.

Equality Maryland PAC’s endorsement of Brown for the state’s top office is likely to raise some eyebrows, as it snubs Del. Heather Mizeur (D-Montgomery Co.), an out lesbian seeking to become Maryland’s first female governor. Mizeur has been one of Equality Maryland’s strongest allies in the General Assembly since her election in 2006, serving as one of chief defenders and public advocates of the law legalizing same-sex marriage, both during the 2011 and 2012 legislative sessions and the ensuing ballot initiative that sought to uphold it. Maryland voters later chose to uphold the law in November 2012 by a 52-48 margin. Mizeur has also been a high-profile advocate of several of Equality Maryland’s other initiatives, including the push for nondiscrimination protections for transgender people in the areas of employment, housing, credit and public accommodations.

Mizeur’s running mate, the Rev. Delman Coates, has not held elective office before, but has been a vocal ally for the LGBT community, most prominently during the marriage equality fight, when he successfully argued the point that the law would not infringe on religious liberties because churches and religious organizations are not required to perform same-sex marriages if it violates their religious beliefs.

Brown has also been an ally of the LGBT community in his role as current Gov. Martin O’Malley’s second-in-command. While Brown also campaigned on behalf of the marriage equality law, and has been a supporter of other pro-LGBT initiatives, he has largely flown beneath the radar, particularly in contrast to O’Malley, Mizeur and Attorney General Doug Gansler, who is also seeking the Democratic nomination for governor. In a press release, Equality Maryland PAC said that after meeting three times with the Democratic candidates for governor, they felt the Brown-Ulman ticket would be the most effective in getting Equality Maryland’s top priorities enacted, although it praised all three candidates at the top of the ticket for their commitment to LGBT equality.

“Equality Maryland’s PAC has worked since 2006 to help elect individuals who will fight for LGBT equality,” Equality Maryland’s PAC Chair Timothy Williams said in a statement. “It is remarkable that seven years later, we have come to a point where all three Democratic candidates for Governor are enthusiastically supportive of LGBT issues.”

In a follow-up interview with Metro Weekly, Williams said the PAC also looked at candidates’ willingness to serve as a surrogate on LGBT issues, their positions on non-LGBT issues where Equality Maryland works in tandem with other state organizations such as funding for HIV prevention, and the electoral viability of the campaigns before making a final endorsement.

Equality Maryland’s PAC also announced support for 36 General Assembly candidates, all incumbent Democrats running for re-election or for higher office. The reason for their endorsement was their vote in favor of the Civil Marriage Protection Act, the marriage equality legislation, and their expressed support for the Fairness for All Marylanders Act, which would expand the law to provide nondiscrimination protections for transgender individuals.

The PAC did note that three Republicans – Del. A. Wade Kach (R-Baltimore Co.), Del. Robert Costa (R-Anne Arundel Co.) and Sen. Allan Kittleman (R-Howard, Carroll counties) – voted in favor of the marriage equality bill, but none are running for re-election to the General Assembly. Kach is running for the District 3 seat on the Baltimore County Council, and Kittleman is running for Howard County Executive. The PAC also said that it would issue at least one more round of endorsements in the coming months.

The 12 Democrats earning endorsements for state senate are:

The 24 Democratic incumbents earning endorsements for the House of Delegates are: