Mayor Marc Tartaro and Ward Four Councilmember Edouard Haba, were absent, but both supported the Human Rights Act as written, according to Ward 3 Councilmember Patrick Paschall, the chief sponsor of the measure. 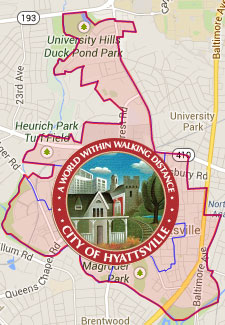 In passing the Human Rights Act, the city of less than 18,000 joins Baltimore City, Baltimore County, Howard County and Montgomery County in passing LGBT-inclusive nondiscrimination legislation, which is seen as a first step in the fight to gain statewide protections. Currently, a little under half of the state’s population lives in jurisdictions with such protections.

Bills granting statewide protections to transgender individuals have passed the Maryland House of Delegates, but have failed to gain the necessary votes in the Maryland Senate.

Paschall, also a senior policy counsel at the National Gay and Lesbian Task Force, says that passing a law reflecting Hyattsville’s diversity has been his priority since being elected in May.

”The very first thing I wanted to do, the signature initiative I wanted to put my name on, was the Human Rights Act,” says Paschall. ”We have the opportunity to be at the cutting edge of civil rights in Maryland, and we can send a message to Annapolis that residents overwhelmingly support gender-identity-inclusive laws.”

Carrie Evans, executive director of LGBT rights organization Equality Maryland, was among those who testified in support of the legislation, along with several Hyattsville residents, including LGBT-rights activist Candace Gingrich, associate director of the Human Rights Campaign’s Youth and Campus Engagement Program and half-sister of former GOP House Speaker Newt Gingrich. In her testimony, Evans noted the importance of passing local laws to build momentum at the state level.

”Passing this ordinance in Hyattsville will make measurable differences in people’s lives,” Evans testified. ”Equality Maryland is part of the Maryland Coalition for Trans Equality, a coalition of more than 50 organizations, working on passing similar protections at the state level and your passage of this local law will help greatly in that effort.”

Dr. Dana Beyer, executive director of Gender Rights Maryland, which is focused on passing transgender-inclusive protections at the state level, says Gender Rights Maryland is monitoring pending leadership elections in Prince George’s County, but cautions that any leadership change will not necessarily ensure the five votes needed for passage of any transgender-inclusive legislation through the County Council.

Beyer notes, however, that polling by LGBT activists during the 2012 marriage-equality fight showed that more than 60 percent of Prince George’s County residents support gender-identity protections, far more – at least at the time – than those who supported marriage equality.

The biggest fight for gender identity protections, says Beyer, remains at the state level, which may require a reshuffling of senate committees by Senate President Thomas V. ”Mike” Miller (D-Anne Arundel, Prince George’s counties) or the threat of a primary challenge to some of the Democrats on the Senate Judicial Proceedings Committee who have been blocking gender-identity protections.

Paschall says he expects to see other municipalities take steps to pass protections for transgender residents in the coming months, and is calling on fellow lawmakers across Maryland to show leadership on the issue. He adds that there is ”no excuse” for the Prince George’s County Council not to pass similar legislation.

”Until we see a county law passed – and, more importantly, a state law passed – we as government leaders have a responsibility and an opportunity,” says Paschall, ”to provide protections for our transgender citizens.”