As one of the country’s top theater towns, Washington is awash with superb actors. But what makes many of them extraordinary is their seeming dedication to bolstering craft and community, and not simply ego and stature. Or at least that’s the impression you get time and time again taking in the many local stage productions powered by strong ensembles: shows in which actors share the spotlight working as a team to tell a collective, compelling story.

So strong is ensemble acting in D.C. that just when I thought I had seen the ensemble cast of the year — the family foursome portrayed in Round House Theatre’s The Lyons — one of the last shows to open in 2013 upstages it. In fact, Studio Theatre’s ensemble performing the first two plays in The Apple Family Plays series just may be the strongest and tightest seen in several years. As perceptively directed by Studio’s Serge Seiden, these six actors have effectively become the Apple family onstage — awkward yet familiar, comfortable but not exactly close, with the family dynamics expressed as much through body language and sideways glances as in actual dialogue. 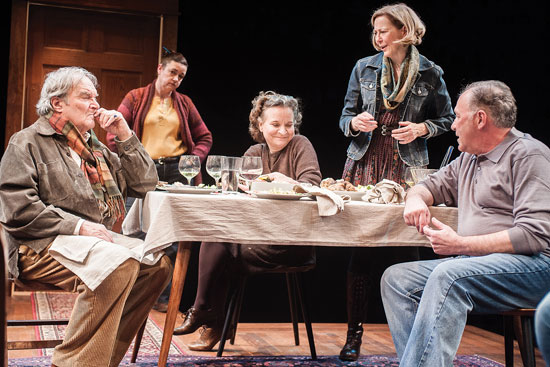 Though the dialogue here definitely aids in the ensemble’s efforts. Playwright Richard Nelson’s goal in writing what is ultimately a four-play series was to capture how politics, current events and even personal matters are discussed in families across the country. The result is remarkably naturalistic dialogue, full of the kind of half-told or interrupted stories, plus throwaway asides and arguments, you find in any conversation. So much of it seems real and spontaneous rather than scripted.

Nelson was originally commissioned by New York’s renowned Public Theater with the idea for a political play about America today, with special discussion of the wars in Iraq and Afghanistan. Nelson opted instead for a Chekhov-like focus on one New York family with only tenuous ties to politics and no connection to the wars. And he opted to present the family in four annual snapshots, with each play set and first performed on a culturally significant date in that year. Studio Theatre is currently presenting in repertory the first two, dating to Election Day 2010 and Sept. 11, 2011, respectively.

The first play, That Hopey Changey Thing, weighs in on the sorry state of American politics, and not just from a liberal’s perspective. The title, of course, comes from Sarah Palin. In the play the lawyer and increasingly conservative Apple brother Richard (Rick Foucheux) essentially defends Palin before leading a discussion straight out of her playbook, criticizing President Obama and those who voted for him. No doubt some progressive-minded, politically savvy theatergoers will have to fight the urge to channel John Roberts and yell ”Not true!” — as well as ”Not fair!” — every once in a while. But even when you disagree, you still appreciate this mostly civilized discussion about modern-day politics, something that’s become as rare onstage as off, save for the shouting matches on cable TV. ”We’re just talking? Not arguing?” oldest sister Barbara (Sarah Marshall) interjects at one point, helping keep the conversation from overheating.

Sweet and Sad, the second play, isn’t quite as solid a work as the first, dragging here and there, but it is more intellectually stirring. Sweet and Sad criticizes the corruptive influence of money on both politics and urban culture. But 9/11 and the ”War on Terror” is the chief focus of this play, whose title comes from Walt Whitman’s poem The Wound-Dresser, about his days as a nurse in the Civil War. Here again we benefit from a rare discussion of ideas and concerns that are too hot to handle for most people today, such as: Are we over-memorializing our tragedies, including 9/11?

Ultimately, though, even in our political town, the thing that sticks with you from both That Hopey Changey Thing and Sweet and Sad is Nelson’s richly drawn characters, burnished by each actor’s skill. It’s hard to take your eyes off of Elizabeth Pierotti as the overly sensitive sister Marian, especially in Sweet and Sad after her daughter’s death. But the actors playing her sisters are equally impressive, Marshall as Barbara and Kimberly Schraf as Jane. (Schraf was last seen in yet another superb ensemble from this year, Ford’s Theatre’s The Laramie Project.) The play’s true heart, though, is in the character of the family patriarch, Uncle Benjamin, played with warmth and charisma by Ted van Griethuysen. Benjamin is a retired actor who suffers from amnesia but retains a healthy joie de vivre and funny disposition. In other words, there’s still hope.