Home / News + Politics / Columns / The Hope for the Pope

The Hope for the Pope

Naming Pope Francis as Person of the Year for LGBT people, The Advocate mistakes hope for reality

So here we are, nearing the end of 2013 under the annual bombardment of year-in-reviews and ”Person of the Year” covers. While I enjoy reading (and writing) a good year in review, I don’t much care for the person-of-the-year trope. It’s the most unabashed trolling you’ll find in journalism, whether trying to provoke an angry conversation (Time‘s choice of Hitler as 1938’s Man of the Year still stands as a classic of the form) or a mass attack of the warm fuzzies (Time‘s 2006 Person of the Year, namely ”You”).

Interestingly for 2013, it turns out the same choice can be a warm fuzzy for one magazine and a provocation for another. 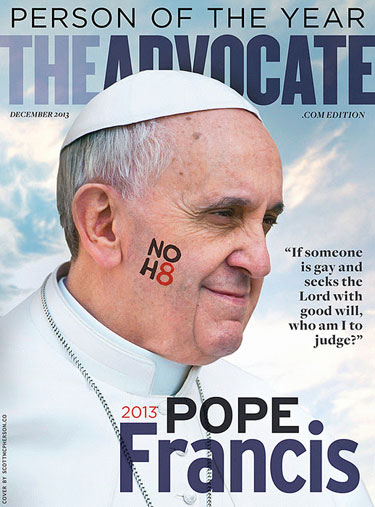 On the warm fuzzy side, for 2013 Time skipped over Edward Snowden and the massive disruption he caused in America’s ever-growing surveillance state in favor of Pope Francis, the Argentinean head of the Catholic Church who has already profoundly changed the appearance and tone of the Vatican.

On the provocative, ”You have to got to be kidding me” side, longtime LGBT magazine The Advocate skipped over Edie Windsor’s heartwarming and emotional victory for marriage equality at the Supreme Court to laud Pope Francis’s ”Who am I to judge?” approach to homosexuality.

This is a deeply silly choice, not because Francis is a silly man — far from it — but because it’s designed to provoke and get people talking. Preferably, I imagine, on Facebook and Twitter. It’s silly because it’s nearly unsupportable on the most basic criteria, namely the pope’s actual effect on LGBT lives in 2013 versus the hope of what he may do in the future.

As an agnostic gay man who was raised in an evangelical church, I’ve found Pope Francis to be intriguing and inspiring. Holding and blessing a man horribly disfigured by illness; washing the feet of a young Muslim woman; indulging a young boy who nearly upstaged him during a Vatican event; leaving behind the opulent, glam-rock excesses of Pope Benedict — those are the most Christ-like actions I’ve seen in ages from a major Christian leader.

Living in a country where the politics of religion are dominated by mega-church preachers and a ”prosperity gospel” teaching that God wants you to be rich — the antithesis of the Gospels — it’s clear why Francis has been embraced by so many. The pope signals great potential for Catholics and Christianity in the future.

Tellingly, The Advocate seems to have spent nearly as many words defending its decision not to choose Edie Windsor as Pope Francis spent on the subject of homosexuality. Yes, it’s a great thing when the pope steps back from the anti-gay rhetoric that marked Benedict’s tenure. But, frankly, in 2013 the bar for LGBT acceptance by public figures needs to be higher than, ”Who am I to judge?” The Advocate says, ”True to his word, Pope Francis hasn’t used his biggest moments in the world spotlight to condemn LGBT people” — so his greatest influence is that he did nothing.

Again, that’s not a direct impact on the lives of LGBT people, it’s a signal of potential. Again, from The Advocate‘s story: ”One could imagine how acceptance of LGBT people might fit into the pope’s case for loving every human being and valuing the contribution made by each to society. With less than a year as pope, Francis still must show whether his aspiration ends at not being our enemy. Will he be an agent for fighting our discrimination worldwide?”

Will he? Who knows? That’s the problem of writing a ”Person of the Year” story in the future tense as opposed to the past. Pope Francis may do great things in the future for LGBT people, but in the momentous year of 2013 we have plenty of examples of victory and change in the present.

Sean Bugg is editor emeritus of Metro Weekly. He can be reached at at seanbugg@gmail.com. Follow him on Twitter @seanbugg.