”Sometimes people get this idea in their head,” blogger and journalist Kenneth Walsh says. ”Oh, if I get a nose job, my life will be so much better.”

Almost immediately, naysayers chime in: ”Don’t put so much focus on this one thing that you think you want.” 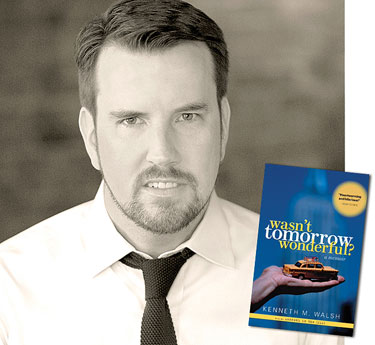 Walsh’s advice? Ignore them. ”It’s everything I dreamed it would be, and everything I wanted to have happen in my career,” he says about his life now, at age 46.

No, Walsh didn’t get a nose job. His life-enhancing target was moving to New York. ”From the time I was 6 years old that’s what I wanted to do,” he explains. But Walsh, who grew up in suburban Detroit, and then Phoenix as a teenager, curbed his Big Apple cravings once he graduated from Arizona State University. After a stint in Los Angeles, Walsh moved to D.C., where his mother had grown up and his parents had married. He might have stayed longer than five years, but after a ”bad breakup” he needed to flee D.C. Already geographically closer than ever to his dream deferred, why not finally go for it?

Sixteen years later, Walsh chronicles his adventures in Wasn’t Tomorrow Wonderful?, which Magnus Books will publish next week. The title comes from a song by the new-wave band The Waitresses, and the subtitle — A Memoir — is a bit misleading. ”I consider it a book of essays,” Walsh says, ”because it’s not really chronologically put together like a traditional memoir.” Two of the essays previously appeared as shorter pieces in Instinct magazine, and a few others were expanded from posts to Walsh’s personal blog, Kenneth in the (212).

”There were some rough years of bad dates and [unfortunate] online hookups,” Walsh concedes, though he’s been with his partner Michael for 12 years. And after seven years, he got laid off in 2010 from his ”dream job” at The New York Times. Now an editor for the Wall Street Journal‘s website WSJ.com, Walsh also hopes to write a second book at some point, another work of personal nonfiction. ”I just find truth is so much more interesting than anything anyone could dream up.” You could say he’s living proof.