Getting past your peak calls for more gym dedication, not permission to coast to the finish line 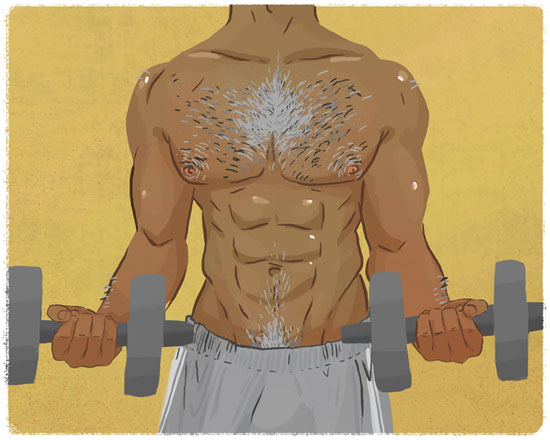 I’ll be up front: I’m not old by any stretch. At 25, I’m only a short seven years into my adult life, legally speaking. I still do things most young guys are able to do in the gym: lift an unnecessary amount of weight, recover after a single day, and enjoy a high level of elasticity to help avoid injuries. That’s not the case for everyone under the same gym roof as me, though.

The two people I most often lift with are both older than 50. Lifting with them during the past year has taught me plenty about what it’s like to intentionally damage yourself for the sake of feeling better.

The primary lesson is that just because you’re the oldest, that doesn’t mean you shouldn’t be there. It’s bound to happen at some point. Age is fleeting and we will all look around one evening and realize we’re no longer the newest rooster in the coop. By no means should that stop you from going to the gym.

Science has been showing for some time that working out not only improves body composition, but also chemical balance in the body. It releases the same endorphins that you experience during sex, and puts you on an emotional high. The increased oxygen consumption also creates a pseudo-high for hours after you exert. There are too many advantages to ignore.

On the flipside, post-workout recovery does take longer. The body’s metabolism slows down as you age, generally reaching its peak in your 20s. This means the food you consume is processed more slowly. It’s not completely detrimental, but it would benefit most to switch to a sort of body-builder split, working one or two muscle groups per day. That focus allows you to rest each muscle group for a longer period, insuring a full recovery between workouts.

While it’s hard to make an argument against lifting as you get older, you shouldn’t expect the world. With that slower recovery comes slower results. Again, as we age, our body’s chemical processes slow, and that includes hormone generation. Barring a thyroid issue, testosterone levels usually decrease with age. Notably, TRT (testosterone replacement therapy) is a viable option for most men over 40 to regain that advantage in the gym, and can speed up your results. If you’re opposed to those injections, just expect fewer gains.

You’ve also got to pay far more attention to diet, which seems to be routinely overlooked. Think of pro football linemen once their careers end — they stop exerting themselves as much while getting older and tend to balloon to ridiculous weights. When the metabolism slows down, you should consume less to maintain the same weight. People condition themselves to eat a certain amount, and that can be very difficult to change. Difficult, but crucial.

Useful at any age, but particularly as an older gym-goer, is finding someone to push you. Complacency is deadly. Our success as a species has hinged on our ability to move. Take a moment to sit completely still, and look at the same spot on the wall, floor, or your monitor for a few seconds. For many of us, we’re hard pressed to last more than 30 seconds. It’s basic human instinct to move. Just the same, it can be very monotonous and boring to go into the gym day after day and lift the same weights, in the same order. Find someone who is going to push you to lift heavier, run longer, or try something new. Classes are also a great option for this — anything to develop some new accountability.

Hitting the top of the hill isn’t the end of the game for anyone. Likewise, just because it’s downhill from there doesn’t mean it’s time to coast. That gym dedication will leave you feeling younger, feeling better, and, frankly, who doesn’t like feeling like they just had sex?

Brandon Harrison covers health and fitness for Metro Weekly. Read more at MetroWeekly.com/health. Follow him on Twitter at @ttrbrandon.