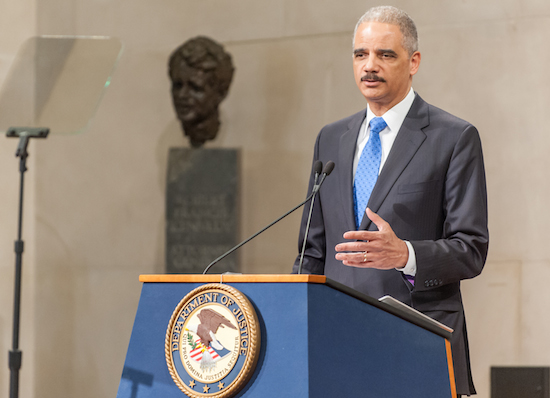 Attorney General Eric Holder appeared to give state attorneys general the green light to stop defending bans on same-sex marriage during a speech in Washington Tuesday.

While not explicitly ordering his counterparts in the states to defy state law, Holder articulated a philosophy that requires attorneys general to lead, particularly on civil rights.

“Any decisions – at any level – not to defend individual laws must be exceedingly rare. They must be reserved only for exceptional circumstances. And they must never stem merely from policy or political disagreements – hinging instead on firm constitutional grounds,” Holder said at the winter meeting of the National Association of Attorneys General, expanding on remarks first made to The New York Times. “But in general, I believe we must be suspicious of legal classifications based solely on sexual orientation. And we must endeavor – in all of our efforts – to uphold and advance the values that once led our forebears to declare unequivocally that all are created equal and entitled to equal opportunity.”

Holder spoke about his own experience in early 2011 when he and President Barack Obama determined that the Justice Department would no longer defend the constitutionality of Section 3 of the Defense of Marriage Act, defining marriage as between a man and a woman.

“Our actions were motivated by the strong belief that all measures that distinguish among people based on their sexual orientation must be subjected to a heightened standard of scrutiny – and, therefore, that this measure was unconstitutional discrimination,” Holder said.

According to Holder, all justice professionals are called “not merely to use our legal system to settle disputes and punish those who have done wrong, but to answer the kinds of fundamental questions – about fairness and equality – that have always determined who we are and who we aspire to be, both as a nation and as a people.”

That decision by Holder and Obama proved significant for the two landmark same-sex marriage cases that were ultimately taken up by the Supreme Court. During oral arguments before the Supreme Court last March, Obama’s Solicitor General Donald Verrilli not only argued against DOMA, but also against California’s ban on same-sex marriage. June’s broad Supreme Court ruling striking down Section 3 of DOMA in the Windsor case has led to a number of victories for marriage equality in the nearly eight months since, with every federal judge — whether appointed by a Democratic president or a Republican president — to consider state same-sex marriage bans finding them to be unconstitutional, and in many cases pointing to an aspect of the Windsor decision in their rulings.

On Feb. 20, Oregon Attorney General Ellen Rosenblum joined attorneys general in Virginia, Nevada and Pennsylvania in announcing she would apply heightened scrutiny and not defend her state’s same-sex marriage ban during pending litigation.

“The law in this area is developing and it is now clear that there is no rational basis for Oregon to refuse to honor the commitments made by same-sex couples in the same way it honors the commitments of opposite-sex couples,” Rosenblum said in a statement. “Because we cannot identify a valid reason for the state to prevent the couples who have filed these lawsuits from marrying in Oregon, we find ourselves unable to stand before federal Judge McShane to defend the state’s prohibition against marriages between two men or two women.”

Similar decisions were also made by attorneys general in California and Illinois before same-sex marriage was legalized in those states.

With more than 40 lawsuits challenging same-sex marriage bans in dozens of states, it seems likely Holder’s example could lead more state attorneys general to abandon their defense of prohibitions on same-sex marriage. According to Michael Cole-Schwartz, a spokesperson for the Human Rights Campaign, Holder’s leadership should inspire state attorneys general to consider “how they defend the indefensible.”

“With numerous courts finding bans on marriage equality to be unconstitutional, it’s clear that those standing against denying marriage to loving and committed couples will be on the right side of history,” Cole-Schwartz told Metro Weekly.

During his remarks Tuesday, Holder reiterated statements he made after the Obama administration’s decision to not defend DOMA was announced, stating that “America’s most treasured ideals” were not given the full force of law instantaneously. “On the contrary: Our ideals are continually advanced as our justice systems – and our Union – are strengthened; and as social science, human experience, legislation, and judicial decisions expand the circle of those who are entitled to the protections and rights enumerated by the Constitution,” Holder said.

“As attorneys general, we are called to serve,” he concluded. “We are expected to lead.”