With the Kwid and NEXT TWO concepts, the French carmaker throws in drones, massage chairs and a car that comes to you 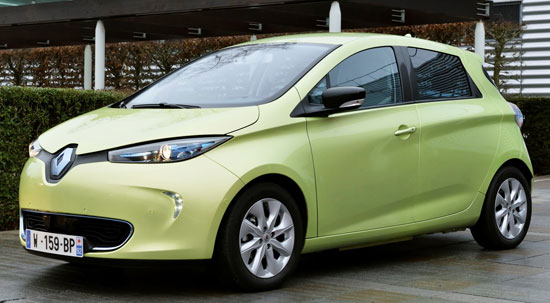 Renault is a name relatively unknown in the American automotive world. The 115-year-old French carmaker left these shores in the late 1970s, never to return. Across the pond and around the world, however, Renault has its hands in numerous four-wheeled pies. It’s one of the world’s leading car manufacturers, with operations on five continents and sales of the Renault brand and its subsidiaries reaching 2.6 million in 2013. In 1999, the company joined forces with Japanese car giant Nissan, in a strategic partnership that aims to share technologies and resources across both brands. Combined, the Renault-Nissan partnership is fourth largest in the world in terms of sales.

However, global importance aside, it’s Renault’s unique design touches that have made it a force to be reckoned with. In the early ’00s, a new design language was ushered in that emphasized emotion, desire and an emphasis on curves. Safety became a top priority, with Renault the first marque to score a perfect five in Europe’s crash-test ratings. But substance was not without style.

Renault eschewed established design parameters with models such as the Mégane, a five-door hatch that sported a prominent, curvaceous derrière and a marketing push that playfully featured the car “shakin’ that ass.” It worked. In a world of bland Euro-box cars, Renault forged a bold design path that other manufacturers have been emulating and enhancing to this day.

It’s in its concepts, though, that Renault really goes hog wild on every front. Auto shows are dominated by bold models that feature elaborate interiors, stunning exteriors and technologies that won’t see the light of day for years to come, with equally sumptuous names such as the Initiale Paris (an exhilarating mix of crossover, minivan and wagon) and the DeZir (an all-electric supercar that teased Renault’s current design language). What made these concepts unique, however, was that the outlandish designs often were only partially diluted into a more mainstream vehicle that ended up in showrooms. Renault strives to maintain as much of the extraordinary in its ordinary lineup as possible. 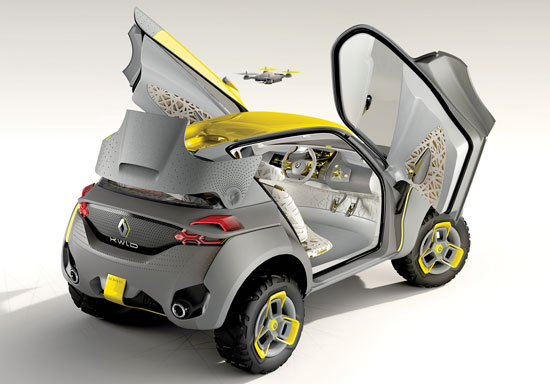 Occasionally, however, Renault produces a car so fantastical that it will remain just that: a fantasy. Enter the Renault Kwid, a funky little crossover with proportions not too dissimilar to Nissan’s Juke. At first glimpse, it’s just your typical concept car. Bold, bulging bodywork with thick bumpers, brightly colored guards and scissor doors give the Kwid a chunky, beach-buggy silhouette. Through the slim glasshouse, a five-seat layout that puts the driver at the center of an uncluttered, plastic dash, with typically over-styled molded seats and a futuristic design that would be hellish in the real world to operate. Still, this is a concept, so it doesn’t matter. Black, grey, yellow and white are the only colors used on the Kwid, and it’s a pleasingly utilitarian look for a vehicle that’s actually not very hardy underneath — chunky tires aside, it’s powered by a 1.2-liter turbocharged engine that drives the front wheels only. Don’t expect to venture into the great unknown with the Kwid. This is a vehicle designed for young urbanites.

It’s that urban setting that grants the Kwid its pièce de résistance. Stuck in traffic while roaming the city streets? Wondering what the obstruction could be? Simple. Grab the tablet integrated into the Kwid’s dash and launch an autonomous “quadrocopter” that lives inside a compartment in the roof. The flying companion scouts ahead, relaying live video of traffic jams, alternate routes and other information to help you negotiate the city streets — possibly helping avoid clogged junctions before you reach them. It can be flown from the tablet, or left to automatically scout ahead and send back pertinent information as required.

Of course, it’s all purely conceptual, and would only raise more questions than the problems it seeks to solve. Who is liable should a quadrocopter hit something? Is there a system to prevent use while driving? What if it fails to return to the car? What if the battery dies? None of these matter, as Renault has admitted that the idea will likely never see the light of day. Still, it’s a fun thought for the next time you’re sitting in traffic and clueless as to what’s causing the hold up. Launch the quadrocopter, scout ahead and see who it is that you need to mentally curse for delaying your journey.

One concept that could easily make its way to our roads in the not-too-distant future is Renault’s “NEXT TWO.” Based on the company’s adorable Zoe electric-powered sub-compact, the NEXT TWO tackles a different aspect of traffic jams to the Kwid. It’s inevitable that, while driving in a city, you’re going to hit a delay or snag of some sort — and, let’s face it, jams are just a complete drag to negotiate. Stopping, starting, flipping off the guy next to you for trying to cut in…. Traffic jams are just unnecessary stress.

Enter the NEXT TWO to solve two problems with one cute little hatchback. Mixing autonomous driving with a massage parlor, the NEXT TWO would take over from the driver in dense traffic and only relinquish control should it feel conditions require. Capable of driving itself at speeds of up to 18mph, it would operate on protected routes free from pedestrians and cyclists, where lane changes aren’t needed. Think negotiating an inner-city freeway. Find yourself in slow-moving traffic and simply push a button for the NEXT TWO to take over.

Using a mixture of cameras, sensors and an ultrasound field, it monitors other cars and maintains an appropriate space and distance. A heads-up display and smart seat keep the driver notified of any dangers the car detects, allowing them to step in and resume control should the automated system feel it’s necessary. Should the driving be smooth and clear, however, the seat can automatically move into a more comfortable position for relaxation, activating a special massage function to help further remove stress from the daily commute. Add in a mobile hotspot, hands-free entertainment, a built-in tablet and the ability to book concert tickets and restaurants, and the NEXT TWO becomes a productive hub in which to work or relax as you negotiate the city streets.

What about when you reach your destination? Never fear. Renault envisages a self-parking mode, enabled via a smartphone app, which will have the NEXT TWO seek out an appropriate parking space near your home or office and wait until you require it. Summon the car, and it’ll automatically adjust heating and entertainment as it negotiates to your position. Need to make it to a meeting or scheduled event? The NEXT TWO will scan local traffic and GPS routes, notifying you when it needs to be summoned to make it on time, as well as offering to take control on protected routes to ensure you make it to your destination on time. It all sounds relatively advanced, which it is, but Renault says with the right road networks the technology could be brought relatively cheaply to market by 2020.

Now, can we have a self-driving car with a built in quadrocopter, Renault? I can’t be the only one who wants to watch my own progress from outside the car, video-game style.