After nearly a decade, Andrew Barnett is bidding the organization he has worked for goodbye.

The 31-year-old Barnett, who started as an intern and later rose up the ranks to executive director of Supporting and Mentoring Youth Advocates and Leaders (SMYAL), announced on March 11 that he would be leaving SMYAL to pursue a Ph.D. in clinical psychology at George Washington University. Barnett’s goal is to add more research to the study of mental health among LGBT and questioning adolescents. 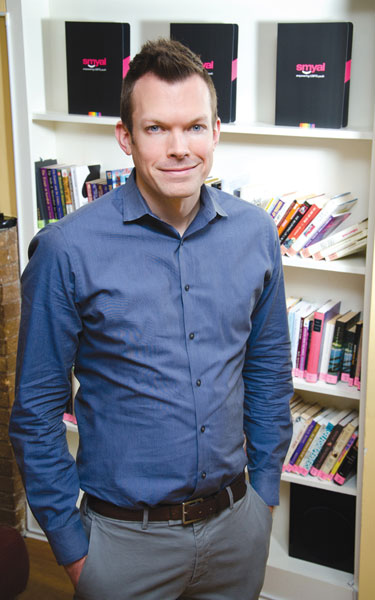 As he looks back on his time with SMYAL, Barnett is most proud of two major accomplishments: the launch of the organization’s Gay-Straight Alliance Network, which provides support to students who are trying to form gay-straight alliances (GSAs) at their schools; and leading SMYAL through its 2011 strategic planning process, which allowed the organization to reassess its mission and reshape or revitalize its programs to better serve the youth that come to SMYAL for support.

During SMYAL’s strategic planning process, Barnett was forced to seek other sources of income to recoup money lost when one of SMYAL’s government grants used to fund its HIV/STD outreach, testing and counseling programs was not renewed. SMYAL was eventually able to secure new funding to continue the testing and counseling program through new funding from the D.C. Department of Health. But the experience also prompted Barnett to foster better relationships with individual donors and corporate sponsors.

“One of the reasons why SMYAL has been able to grow and thrive for 30 years now is the tremendous generosity of the LGBTQ and allied community here in D.C.,” he shares. “And by increasing our focus on working with individuals, community members who invest in SMYAL’s programs and in SMYAL’s work, we’ve been able to narrowly increase the proportion of our budget that comes from individual donors, but also to increase our overall budget.”

Funding aside, the single greatest problem facing LGBTQ youth — as Barnett sees it — is the coming-out process, particularly with people coming out at younger ages than in years past. Because young people don’t necessarily have the support needed to navigate that process, Barnett says parents and other adults in youths’ lives must serve as allies, helping them to increase self-esteem and combat risky behaviors such as drug use and unsafe sex.

In his time at SMYAL, Barnett has worked hard to draft more of those allies for LGBTQ youth. Some of that has been outreach into religious communities, with SMYAL holding trainings or other events with affirming churches and faith communities. The organization has also collaborated with other local LGBT-affirming groups such as Parents, Families, and Friends of Lesbians and Gays (PFLAG), the Latin American Youth Center (LAYC), as well as with government agencies like D.C. Public Schools (DCPS) and the Metropolitan Police Department (MPD).

Mike Schwartz, the chair of SMYAL’s board of directors, says Barnett’s leaving is a “personal loss” for those who have gotten to know him during his years with SMYAL. Schwartz also credits Barnett with helping SMYAL focus its mission on programming specifically designed to foster youth leadership and encourage them to become greater advocates for causes important to them.

“A lot of us have seen Andrew grow as someone who had never been in a management position,” says Schwartz. “The board took a risk — we had other candidates — but we had a sense that Andrew could do the job, and we were amazed at how he went beyond our expectations.”

While Barnett says his successor will determine SMYAL’s priorities in collaboration with the organization’s board of directors, he does feel it is important to continue to grow SMYAL’s GSA program to be able to create change on the local level in schools by making “safe spaces” for LGBTQ youth. Barnett also sees a greater need to change the culture of D.C.’s service-provider agencies, whose employees may be hostile or uneducated about the importance of LGBTQ cultural competency, such as dealing with homeless transgender youth who try to access D.C. shelters.

But while Barnett sees some aspects of SMYAL’s programs or mission evolving over time as LGBTQ youth gain greater societal acceptance, he says he thinks that one role SMYAL will always fulfill in the lives of the D.C. area’s youth is providing a space for young people to gather and create dialogue over important issues, not just those that are LGBTQ-related, but that deal with social justice, familial challenges, and the effects of institutionalized racism, sexism or classism that also impact many of the youth who utilize SMYAL.

“I think it’s the hope of every nonprofit organization to work itself out of a job,” says Barnett. “To get to the point where it can close its doors because it can say the mission has been accomplished. And I do think we will get to the point where there is an acceptance of LGBTQ young people that we would consider radical today. We have a long way to go before we get there.”

John Riley is the local news reporter for Metro Weekly. He can be reached at jriley@metroweekly.com
← Previous Story NGLF Camp Applications Open
Next Story → Bowser Beats Gray for Dem Nomination