CPAC plays host to a conservative movement at a crossroads 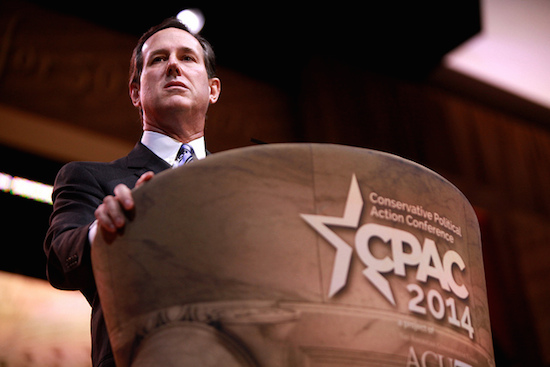 For a gathering that seeks to foster debate and chart a path forward for the conservative movement, the silence on gay issues at this year’s Conservative Political Action Conference was deafening.

In the year since CPAC was last held at the sprawling Gaylord National Resort & Convention Center at National Harbor, Md., much has changed. Three Senate Republicans — Rob Portman (Ohio), Mark Kirk (Ill.) and Lisa Murkowski (Alaska) — have come out in support of marriage equality. In 2013, same-sex marriage was legalized in Rhode Island, Delaware, Minnesota, New Jersey, Hawaii and Illinois. Same-sex nuptials have resumed in California for the first time since 2008, after the Supreme Court refused to hear arguments in the Proposition 8 case, and the federal government’s definition of marriage as between a man and a woman has been struck down as unconstitutional, subsequently leading federal judges to strike down same-sex marriage bans in six states and counting. And the Employment Non-Discrimination Act (ENDA) passed the Senate with the support of 10 Republicans — the most Senate Republican votes ever cast for a piece of gay rights legislation.

The LGBT-equality movement is riding a wave of momentum it has never experienced before, with many Republicans and conservatives no longer walking in lockstep on LGBT issues. A New York Times/CBS News poll released late last month found 40 percent of Republicans believe it should be legal for same-sex couples to marry. But that reality and divide was easy to miss on the stage at CPAC.

“I think throughout CPAC, if I’m being polite, there has been a sensitivity toward gay issues,” said Gregory T. Angelo, executive director of Log Cabin Republicans. “If I’m being a little more cynical, a tiptoeing around gay issues.”

Indeed, speaker after speaker – and presidential candidate after presidential candidate – took to the stage to articulate their message to the conservative movement over the three-day conference, with gay issues rarely mentioned. When New Jersey Gov. Chris Christie, who was snubbed from being invited to last year’s conference for being too moderate, spoke about social issues he framed them in the context of abortion. (Christie upset some social conservatives when he abandoned his administration’s legal fight against same-sex marriage last year, thus leading to same-sex nuptials in New Jersey.) Sen. Ted Cruz (Texas), who introduced an anti-gay marriage bill last month that would defend his states’ right to regulate marriage, articulated a tea party vision of limited government focused largely on federal spending and Obamacare.

“That may be the interesting point, what you’re not hearing about a lot,” Grover Norquist, founder of Americans for Tax Reform and a supporter of Log Cabin Republicans, told Metro Weekly. “I think what has happened is anti-gay stuff has dropped down to near zero. There’s a separate debate on the nature of marriage, whether it’s a secular or sacred institution and what that all means. … But certainly the negative is way down and I think that’s healthy for the country and the party.”

But while the negative may have diminished in 2014, it certainly hasn’t vanished.

Rick Santorum, who has run for president with campaigns firmly planted in social issues, told the audience he didn’t want to talk about “redefining marriage,” but about “reclaiming marriage as a good for society and celebrating how important it is for our economy.” From whom marriage must be reclaimed Santorum did not say, but it was easy enough to read between the lines.

“I’ve been watching a little bit of what’s going on here at CPAC and I hear a lot of, ‘We have to win.’ Now, we all know what they mean. They actually mean, ‘We have to lose,'” Santorum said. “We have to lose those currently unfashionable stances on cultural and limited-government issues that have been proven over time to give Americans the best chance for a healthy, happy life.” 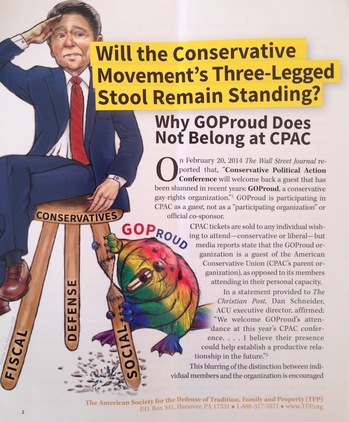 And among the various organizations that erected booths at the conference was the National Organization for Marriage, as well as the American Society for the Defense of Tradition, Family and Property, which distributed pamphlets depicting the group GOProud as a rainbow-colored beaver gnawing away at the social leg of Ronald Reagan’s three-legged stool representing the conservative movement.

Missing for the third year in a row, however, was any official presence of gay conservatives. Although Matt Bechstein and Ross Hemminger — former GOProud interns who became part of the organization’s new leadership team after the departure of GOProud co-founders Jimmy LaSalvia and Chris Barron — were extended an invitation to attend by CPAC’s organizers, the American Conservative Union (ACU), they did not sponsor the event or have a booth present. GOProud participated in CPAC in 2010 and 2011 to the protests of social conservatives, but was kicked out of the conference in 2012 after Barron labeled conservative attorney Cleta Mitchell a “nasty bigot” and blamed her for the decision by the Heritage Foundation to remove itself from the conference over GOProud’s participation. Despite an apology from Barron, GOProud was not invited back.

“This year, we’re not on a panel and we don’t have a booth, which was our choice,” Hemminger said. “But next year we do hope to have a larger level of participation and I hope to see a GOProud supporter on a panel next year and that will be another step forward.”

But while GOProud works to repair its relationship with the ACU board, groups who have done little to rock the boat have found themselves shut out as well. Log Cabin Republicans sought to participate in a “meaningful” capacity, only to receive no response from the ACU. “They told me everything they needed to with their silence,” said Angelo.

Although last year’s conference saw a sparsely attended anti-gay marriage panel featuring NOM’s Brian Brown, and a widely attended panel on gay inclusion, no such panels were devoted to that debate this year. The most the issue was discussed was during a panel on social conservatives vs. libertarians, which witnessed widespread applause not only for preventing government from dictating certain beliefs on others, but also for gay adoptions rather than single-parent homes and putting children in institutions. “Just because you think people ought to act a certain way doesn’t mean you want the government to require them to be that, whether you’re talking about banning Big Gulps or same-sex marriage,” said Alexander McCobin, cofounder and president of Students for Liberty, to widespread applause.

At a panel on minority outreach, the gay community was not once mentioned.

“Part of me sees an element of fear there. I think that it’s largely due to a conservative movement still trying to come to terms with the best language to use when addressing these issues and the messaging on this,” said Angelo.

Lisa De Pasquale, who resigned from GOProud’s board along with Barron and one other member after the organization agreed to attend CPAC as guests of the ACU, said “playing nice” will do nothing to increase acceptance of gay conservatives by CPAC organizers.

“People have been working against GOProud since before Chris or Jimmy said anything. Certainly they’ve had sponsors in the past who have been critical of ACU, so why pick on the gays?” said De Pasquale. “They seem to have a different standard for GOProud just because they’re gay.”

Whether it went acknowledged at CPAC or not, the conservative movement is at a crossroads, with the old guard and a younger generation increasingly at odds over issues such as LGBT equality. “To me the big story is the leadership is out of touch with the attendees and the attendees don’t necessarily know it,” said De Pasquale. But conservative leaders will be forced to address that simmering divide, either among movement-faithful at an event like CPAC or among the masses on the campaign trail.

“Like it or not, gay conservatives are here and here to stay,” said Angelo. “They can either keep their heads in the sand or acknowledge us as a formal part of this movement.”