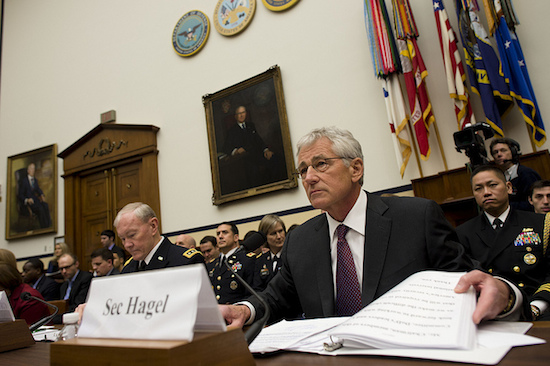 There is no compelling medical rationale for banning transgender people from serving in the American military, an independent commission led by a former U.S. surgeon general and retired admiral concluded in a study released Thursday.

“We determined not only that there is no compelling medical reason for the ban, but also that the ban itself is an expensive, damaging and unfair barrier to health care access for the approximately 15,450 transgender personnel who serve currently in the active, Guard and reserve components,” the report states. “Medical regulations requiring the discharge of transgender personnel are inconsistent with how the military regulates all other medical and psychological conditions, and transgender-related conditions appear to be the only gender-related conditions that require discharge irrespective of fitness for duty.”

Despite the repeal of “Don’t Ask, Don’t Tell” in September 2011, a medical regulatory ban remains in place for those who identify as transgender. Not only is evidence of transition therapy grounds for disqualification for potential recruits, so is openly identifying as transgender, which the Pentagon considers a psychiatric condition.

Commissioned by the Palm Center at San Francisco State University, the study was led by Dr. Joycelyn Elders, who was appointed Surgeon General by President Bill Clinton in 1993, and retired Rear Admiral Alan M. Steinman, who served more than 25 years in the U.S. Coast Guard and the Public Health Service. The commission also included a retired general and two experts on transgender issues. The report was endorsed by 16 former and current military university faculty members.

According to the commission, the report’s policy recommendations are simple, straightforward and fair:

Recommendation #3: Base new administrative guidance on foreign military and US government precedents. While no new medical rules are needed, the Defense Department should formulate administrative guidance to address fitness testing, records and identification, uniforms, housing and privacy. We encourage independent scholars as well as Pentagon analysts to study foreign military experiences that could inform the policy-making process. At least 12 countries including Australia, Belgium, Canada, the Czech Republic, Denmark, Israel, the Netherlands, New Zealand, Norway, Spain, Sweden, and the United Kingdom allow transgender personnel to serve; foreign which are sufficient for enabling doctors to make military regulations that apply to transgender military service are straightforward and sensible, offering a sound model for US military policy.

Unlike “Don’t Ask, Don’t Tell,” because policies that prohibit transgender service are spelled out in Defense Department as well as service-specific regulations, but not in a congressional statute, the report states that President Barack Obama could lift the military’s transgender ban without obtaining approval from Congress.

The study is one of 11 commissioned by the Palm Center’s Transgender Military Service Initiative evaluating transgender military service as well as questions related to readiness, morale, welfare, personnel requirements and management. The initiative was launched in 2013 after $1.35 million grant from the Tawani Foundation, which was founded by Jennifer Pritzker. A retired lieutenant colonel who served 11 years in the Army and 16 years in the National Guard, Pritzker became the world’s first transgender billionaire when she came out last September.

Camp counselor says decision was prompted by concern for 14-year-old volunteer's "safety," and not her gender identity.

A transgender teen in Georgia says she was kicked out of a faith-based summer camp due to her gender identity.

Elizabeth Clark, a 14-year-old camp leader at Connect Camps in Cordele, Georgia, says she's identified as transgender since the eighth grade. She decided to volunteer at the camp, but was kicked out after two days following a decision by camp counselors.

Clark's mother, LeeAnn Daabes, received a text from the camp's director indicating that Clark would no longer be welcome at the camp.

"Our team was advised that Elizabeth had made a life choice that unfortunately is causing some distraction at camp," the text reads. "We have agreed it would be best that Elizabeth not return, allowing us the opportunity to meet our promise of a remarkable for the campers."