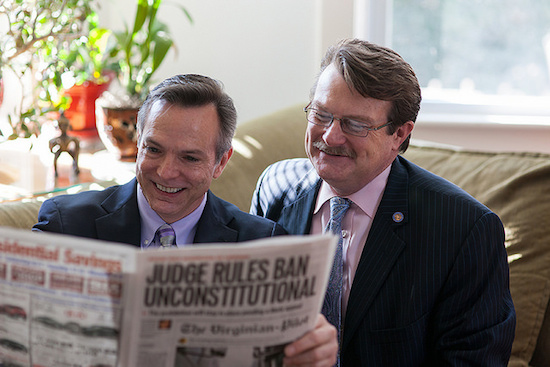 Tim Bostic (left) and Tony London, two of the plaintiffs in the Bostic v. Schaefer case being heard by the Fourth Circuit Court of Appeals this week. Credit: American Foundation for Equal Rights.

The heads of four state-level LGBT-rights organizations whose state marriage laws could potentially be affected by a ruling in the Virginia case of Bostic v. Schaefer, set to be heard by the U.S. Court of Appeals for the Fourth Circuit over the next few days, held a conference call Monday morning in which they outlined how they are preparing to deal with a ruling that could overturn existing prohibitions on same-sex marriage.

When the Bostic case was first argued in the Eastern District of Virginia in February, U.S. District Judge Arenda L. Wright Allen ruled that Virginia’s Marhsall-Newman Amendment, a constitutional amendment banning the recognition of any form of same-sex relationship in the commonwealth, was unconstitutional. Advocates of marriage equality are cautiously optimistic that the Fourth Circuit will uphold Allen’s ruling.

“With Bostic v. Schaefer being heard before the Fourth Circuit Court of Appeals, Virginia and other Southern states have never been closer to gaining marriage equality for lesbian and gay couples,” Parrish said in his remarks. “The most recent polls in Virginia show that a majority of Virginians are in favor of the freedom to marry, and with the majority of our courts striking down marriage bans in states across the country, we are hopeful that trend will continue with the Fourth Circuit’s ruling.”

“Marriage is a fundamental freedom and should not be denied to somebody depending on what state they call home,” Parrish added. “There can no longer be two Americas, and Bostic v. Schaefer is Virginia’s – and the region’s – first opportunity to make that freedom a reality here at home.”

The other executive directors admitted that support for marriage equality was not nearly as high in their own states as in Virginia, but nonetheless noted that polling shows either increases in the number of people who support marriage or some other type of relationship recognition for same-sex couples, or decreases in the percentage of people strongly opposed to same-sex marriage. Both Sgro and Wilson, representing states with large military populations, noted that they had also signed on to an amicus brief in the Bostic case advising how their states’ respective bans on marriage equality adversely affect same-sex couples in the military.

When asked about possible rulings that could be issued by the Fourth Circuit, Sgro said that Equality North Carolina has been talking with legal experts to try and prepare for a wide variety of potential rulings that might impact North Carolina. Sgro said any impact would depend on the size and scope of the ruling, which could range from overturning all marriage bans in states under the jurisdiction of the Fourth Circuit, to providing legal precedent for states like North Carolina to mount their own challenges to their marriage bans.

“Our position is that if LGBT couples are allowed to get married in West Virginia, once the Lambda Legal lawsuit goes through, then they will need to be protected from discrimination in employment, housing and accommodations,” Flaminio said.

Flaminio added that she believes that the various challenges to state bans on marriage equality will eventually be successful.

“We are confident that between Bostic and Lambda Legal, we are ultimately going to win,” she said. “It’s just a matter of time.”

While oral arguments are being heard in the Bostic case beginning tomorrow, Equality Virginia and other allied groups, including People of Faith for Equality in Virginia (POFEV), will be demonstrating outside the Court of Appeals in Richmond to show their support for marriage equality. Parrish, Wilson and Flaminio also noted that their organizations are involved in planning various “CookOUTs for Equality,” in which same-sex couples, community centers and other groups hold cookouts intended to honor those same-sex couples that are married but whose relationships are not legally recognized. Parrish said such events are designed to promote the importance of marriage equality and “change hearts and minds” in the process.