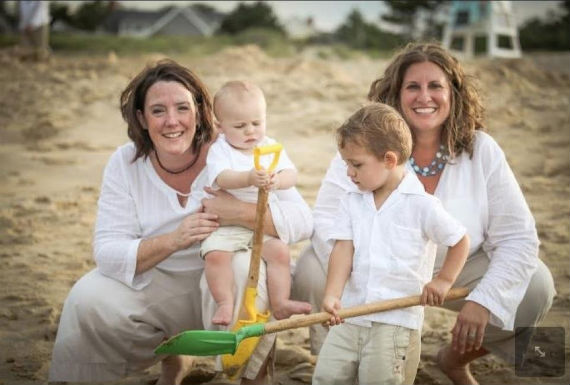 Julie Naff (left) and Jen Shearin, pictured here with their two children, are hosting one of 50 CookOUTs for Equality being held across Virginia the weekend of May 17-18. The CookOUTs are intended to celebrate and stand in solidarity with same-sex couples whose marriages are not recognized by Virginia.

The U.S. Appeals Court for the Fourth Circuit in Richmond on Tuesday heard extended oral arguments regarding the case of Bostic v. Schaefer, the case challenging Virginia’s constitutional ban on recognizing marriage or any other relationship between same-sex couples. While advocates of marriage equality are cautiously optimistic that the appeals court will uphold a federal judge’s ruling that the ban is unconstitutional, several LGBT Virginians and allies are doing their own part, outside of the courtroom, to highlight the importance of bringing marriage equality to the commonwealth.

Several state LGBT rights organizations in the Fourth Circuit, including Equality Virginia, South Carolina Equality, and Fairness West Virginia are encouraging their members to host “CookOUTs for Equality,” in which same-sex couples or allies of the marriage equality movement invite neighbors, friends and family to local cookouts, barbecues or other get-togethers designed to celebrate those couples whose relationships are not recognized by their respective states.

In Virginia, several couples that hosted cookouts last year are doing so again. But this year’s events, against the backdrop of the Bostic case, take on a special meaning, and have given some couples hope that this will be the last year when such events will be necessary. According to Equality Virginia, about 50 different couples throughout the commonwealth are participating.

“The CookOUTs for Marriage Equality are an important way to highlight the many married lesbian and gay couples living throughout the commonwealth that Virginia refuses to recognize, and a way for community members to get together to celebrate these marriages,” Parrish said in a statement. “This year’s CookOUTs also show support for the four couples legally challenging Virginia’s ban on marriage. Virginians have had enough: there is absolutely no reason for Virginia to continue denying lesbian and gay couples the freedom to marry the person they love here at home.”

One of those host couples is at the center of the lawsuits challenging Virginia’s Marshall-Newman Amendment. Victoria Kidd and Christy Berghoff, of Winchester, previously filed suit in the Western District of Virginia as one of lesbian two couples arguing that the constitutional ban on same-sex marriage is unconstitutional. A federal judge stayed the case, known as Harris v. Rainey, pending a ruling by the Fourth Circuit after lawyers for the couples requested and were permitted by the court to intervene in the Bostic case. The Harris case was also previously granted class action status, opening the door for other same-sex couples to challenge the marriage ban.

Kidd told Metro Weekly that she and Berghoff had not intended to hold a cookout as they had last year, when 40 people attended, but the couple was encouraged by a number of friends who came to them and asked them to host another cookout this year. Already 125 invited guests have confirmed their attendance, prompting Kidd and Berghoff to move their cookout to a local park just to make space for the expected influx of guests. They added that a local business, Top Flight BBQ, in Winchester, is helping sponsor the event, which will take place from 11 a.m. to 4 p.m. on Saturday, May 17.

Another couple, Jen Shearin and Julie Naff, of Annandale, is also repeating as hosts of a cookout in their area. Shearin, whose family lives in the area, said last year they held a pool party and barbecue in June for family and friends, and passed around collections for Equality Virginia. This year, the couple has invited neighbors and local politicians, including those candidates running for Congress in Virginia’s 8th Congressional District, to the event, which will take place on Sunday, May 18.

While Shearin says the couple’s relationship has not been an issue they’ve had to confront, she did say that Virginia’s prohibition on recognizing their marriage has forced them to face hurdles and challenges that opposite-sex married couples do not have to face. For instance, when the couple wanted to adopt their two sons, now ages 2 and 4, they had to temporarily rent out their house and Virginia and establish residency in the District of Columbia to ensure they would be able to legally adopt both children and be listed as the parents on their birth certificates.

Even though the family moved back to Virginia after the adoptions were finalized, Shearin says she and Naff have encountered difficulties when filing taxes, as Virginia requires them to file as single individuals, whereas the federal government, as well as the District of Columbia and Delaware, where the couple owns properties, allow them to filed as married.

“To quote our accountants in D.C., we are their ‘most complex clients,’” Shearin told Metro Weekly.

This year, in addition to couples, the LGBT Center of Hampton Roads is also playing host on May 17 in Norfolk, as is the Unitarian Universalist Community Church (UUCC), an LGBT-affirming church in Glen Allen, Va., just outside of Richmond, on May 18.

“When one hears the words ‘marriage equality,’ it’s easy to think it’s just about getting married,” Stacie Walls-Beegle, the executive director of the LGBT Center, said in a statement. “However, it’s not just about getting married. It’s about equality. Being equal in this country is the most important thing, and that should be inclusive of marriage, employment, fair housing, et cetera.”

“The Unitarian Universalist Community Church looks forward to the day (which is coming soon) when we can perform legal same sex weddings in our sanctuary,” Deena Ferguson, the religious education chair with UUCC, said in another statement. “Our religious principals and our hearts tell us that this is the right thing to do. We Stand on the Side of Love. Because all families are valued, no matter what your family might look like.”

Peter Goldin, a Richmond resident and the board chair of Equality Virginia, hosted a cookout with his husband, Brian Hollis, last year. But this year, his parents, Miriam and Richard Goldin, of Reston, are holding their own cookout on May 17. The hosts are counting family, friends, neighbors, at least one other board member of Equality Virginia, the Gay Men’s Chorus of Washington, and three local politicians, Sen. Janet Howell (D-Arlington, Fairfax counties), Del. Ken Plum (D-Fairfax Co.) and Del. Mark Sickles (D-Fairfax Co.), among their expected guests.

But Goldin also said he and Hollis have encountered obstacles that result from Virginia’s refusal to recognize their marriage. For starters, the IRS has audited them for the past three years because of their status as “joint tenants” and their inability to file their state – and until this year, federal – taxes jointly as a married couple. When Hollis had to go to the hospital for a severe migraine headache, Goldin was not allowed to speak for him because he was not considered the spouse. Virginia’s prohibition on same-sex marriage, Goldin says, “handicaps” the couple in many different ways.

“I think people don’t realize what a struggle it is, because a lot of their rights and privileges are taken for granted,” Goldin said. “Most people know the surface issue. But few people understand just what that means or how deep the limitations are.”

John Riley is the local news reporter for Metro Weekly. He can be reached at jriley@metroweekly.com
← Previous Story Squabble over Signature Gatherers
Next Story → O’Malley Signs Transgender Rights Bill