“After elimination, there was definitely an outpouring,” says fan-favorite Ben DeLaCreme of her elimination from this season’s RuPaul’s Drag Race. “I have heard several sources say my elimination was one of the more controversial.”

You may not be able to watch her on the show, but this Saturday, D.C.-area residents can see her perform in person at Town. Not being in America’s living rooms every week has actually made the Seattle resident’s star burn brighter. 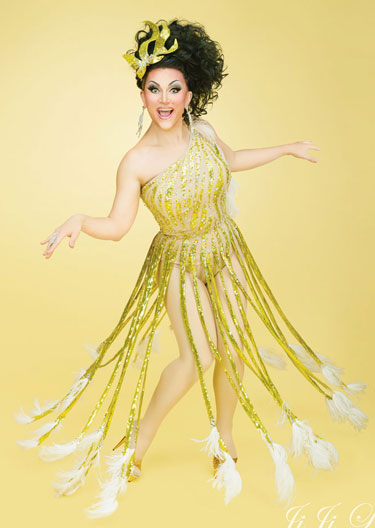 “We film over the summer, so I’ve had months to come to terms with this,” says DeLaCreme. “But having people freak out has been this amazing reflection of vindication. There’s part of me that feels like this reaction is everything I could’ve hoped for. What I wanted from this experience was to show my work to people and have them want more.”

The enthusiastic show-queen has not totally planned out his set list yet, but confirms it will likely include new music from a live show that debuts in New York May 21, and describes the experience of reconciling his male persona, Ben, with its now famous feminine side.

While that challenge has been personal, DeLaCreme also enjoys challenging her audience’s notions of gender and performance. She combines her Art Institute of Chicago degree with her years in Seattle’s punky, intellectual burlesque scene to create a queen with some unexpected substance.

“She’s goofy and bubbly and upbeat, but that’s the sugar that makes the medicine go down. I developed this [act] ready for a mass market. The public at large is a little less progressive than many drag queens, but drag is such a shiny, pretty thing that people want to reach out and touch it. That forces them to come in contact with things like gender transgression and questions of what gender even means.”

As DeLaCreme’s career continues to motor on after Drag Race, it is clear that there is one challenge DeLaCreme won’t be missing — that of a stern, in-person reading by RuPaul herself.

“She has this insane kind of power and aura about her that feels godly in an ancient Greek way, like she could use it for good or evil. She’s not a force of good or evil, she’s just a force.”