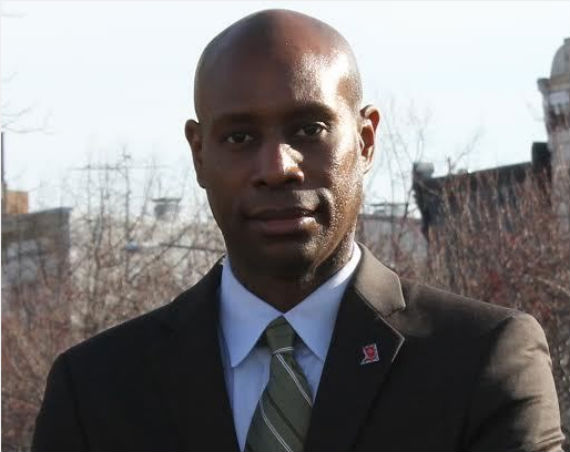 An openly gay candidate for the D.C. Council has received a menacing letter filled with derogatory terms and a possible threat in his home mailbox and has been attacked by a fellow D.C. resident on Twitter. Marc Morgan, a Republican running for the At-Large seat on the Council being vacated by Independent David Catania, sent Metro Weekly a photo of the letter, which he says was stuffed into his mailbox sometime between midnight Wednesday night and 10 a.m. on Thursday morning. He says he grabbed the unopened letter out of his mailbox and took it with him as he was traveling to work this morning, but did not immediately read it. Later, he opened it to discover the letter’s contents. 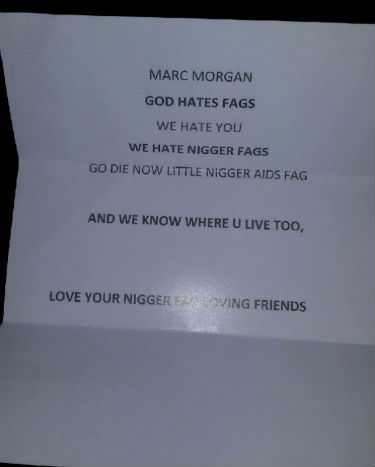 Morgan says he does not know who the letter is from, and when he first opened it, he thought it might have been related to the anti-gay Westboro Baptist Church, a small religious sect from Kansas infamous for protesting various gay rights causes, or, in some cases, military funerals with signs reading “God Hates Fags” to show their disapproval for a country and society that allegedly supports LGBT rights — though their claims predate any of the successes of the LGBT rights movement in recent years. On Wednesday, Westboro posted plans on its website to picket outside of Woodrow Wilson High School, in Northwest D.C., because of its plans to hold an “LGBTQ Pride Day” on June 4. Last year, Wilson became the first D.C. public high school to hold its own Pride event, the brainchild of biology and environmental science teacher Chris Obermeyer, who was able to enlist the help of the Mayor’s Office of GLBT Affairs, Whitman-Walker Health and community LGBT organizations like Casa Ruby, The DC Center and Supporting and Mentoring Youth Advocates and Leaders (SMYAL).

Morgan is concerned because the person who sent the letter knows his home address.

“I have no idea who it’s from, but it’s scary,” Morgan told Metro Weekly. “There are some security cameras across the street from my house, so I’m hoping they will help us identify the person.” 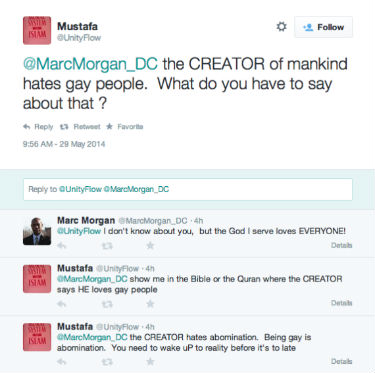 A screenshot of tweets directed at Marc Morgan from Twitter user @UnityFlow, aka Mustafa.

At around the same time he was leaving his house with the unopened letter, Morgan received a couple of anti-gay tweets from a Twitter user known as @UnityFlow in response to an earlier tweet from Morgan, sent out Wednesday, asking his followers to stand in solidarity with Wilson High School. On Thursday morning at around 10, UnityFlow tweeted: “@MarcMorgan _DC the CREATOR of mankind hates gay people. What do you have to say about that ?” In return, Morgan, who is no stranger to defending his sexual orientation tweeted back, “I don’t know about you, but the God I serve loves EVERYONE!” In response, UnityFlow replied to Morgan, “show me in the Bible or the Quran where the CREATOR says HE loves gay people,” and then, “the CREATOR hates abomination. Being gay is abomination. You need to wake uP (sic) to reality before it’s to (sic) late.”

According to UnityFlow’s Twitter profile, he is a “Righteous Activist…Putting The Truth In Your Face….In Hopes That We Can Make The World A Better Place.” He goes by the name Mustafa, lives in Washington, and has tweeted about “Allah” and other references to Islam. He has also tweeted offensive things about LGBT people, including two other tweets from Thursday morning saying, “The only rights gay people have is the right to enter the HellFire,” and “People who are gay, their minds are truly fucked up. They have true mental issues.”

Morgan says he does not know if the letter and the tweets are from the same person, or if they are connected at all. He called the police after opening the letter, and has been told they will be sending officers to his house. He adds that Metropolitan Police Department Chief Cathy Lanier has responded to his complaint with a text telling him to stay put for a while. The case remains under investigation.

“I’m not a detective, but the fact that I received the letter at the same time as these tweets might mean this could be the same person,” Morgan says. “I didn’t start a dialogue with this person. He contacted me. But maybe I’m just hoping it’s one person, because if it’s different people sending these, that’s more concerning.”

The D.C. Republican Party issued its own statement regarding the incident.

“It ceases to amaze me how cowards love to use the veil of anonymity and secrecy to threaten, intimidate, and bully,” Robert Turner, the executive director of the D.C. Republican Party, said. “There is no toleration for this type of action here in the 21st century, and certainly not in the nation’s capital! We will work with MPD and hope they quickly find the culprit.”

[Editor’s note: This story was updated to include comment from the D.C. Republican Party.]

John Riley is the local news reporter for Metro Weekly. He can be reached at jriley@metroweekly.com
← Previous Story Chef Art Smith to host PowerBear Party
Next Story → Do Enters State Board of Education Race