“What can I do with just 10 fingers that will wow people?”

Years after Rolling Stone heralded her one of its “New Guitar Gods” and “a genre unto herself,” Kaki King had been searching for new ways to dazzle as a solo guitar performer, one with a strong percussive-guitar, indie-rock repertoire. And then she discovered projection wrapping and the work of lighting designers V Owen Bush and Benton-C Bainbridge, who go by the name Glowing Pictures. 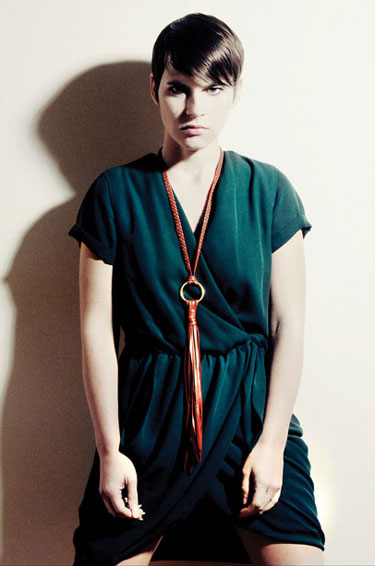 Working together, the three have developed an innovative, immersive audio-visual show. “They’re going to be projecting images onto the surface of the guitar itself, as well as the large screen behind me,” King explains. “And as I’m playing, the volume of what I’m doing dictates how big the images get. Then, in the following section, each note corresponds to a different color that spirals out onto my guitar. It sort of gives me this paintbrush to create visuals using this instrument that I’m already very familiar with.”

“It really is the beginning of something,” King adds about her new work with Glowing Pictures. Meanwhile, she’s also exploring work as a composer for new music classical groups. For example, the large ensemble Alarm Will Sound just premiered a new King commission as part of a “(post)folk” performance featuring King at Carnegie Hall. “That was a big, scary challenge,” admits the 34-year-old. By contrast, while there’s no real precedent for it, her show with Glowing Pictures is otherwise a natural progression of her live show. In fact, the show’s title The Neck Is A Bridge To The Body is simply a metaphor for her guitar — her way of stressing that despite the lighting and visual enhancement, “I’m still me, I’m still playing guitar, it’s still a guitar show.”

The two shows next weekend at Artisphere, in conjunction with the venue’s ambitious sound exhibition Fermata, will be the first performance of the piece outside of King’s base in Brooklyn. Later this year she plans to tour and also release the original music she’s created for it. But before that, over the summer? King will have new domestic duties to tend to.

“My wife is having a baby,” she says, “so I wanted to be fully prepared and totally around for that.”