A mainstay at Black Pride for years, the elegant Rayceen Pendarvis finds joy in touching the hearts and minds of others

By his own admission, Rayceen Pendarvis is “one of a kind.”

An activist, a writer for SWERV Magazine, a local emcee at various parties and events, the chief organizer of the LGBT book and movie club BRUHS (Book Reading Uplifts His Spirit) at Martin Luther King Jr. Library, and the host of the “Ask Rayceen Show,” a live monthly talk show at Club Liv that focuses on LGBT issues, the colorful, engaging and flamboyant Pendarvis flits from one activity to another, and still finds time to volunteer on the side. 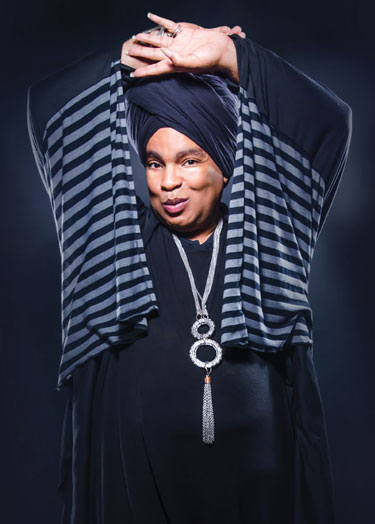 During his interview, Pendarvis dishes out advice and shares his views on life with a sweep of his manicured nails and flashes of humor, sprinkled with references to faith or God. His message when it comes to LGBT activism? Push boundaries, and get out of comfort zones. Make the effort to reach out to others and engage them on a personal level.

“I don’t think I would have ever gotten to where I am in life if I didn’t reach out to meet people from all walks of life,” he says. “I want everybody in my circle. And that was such a wonderful experience because it made my life full and whole.”

But Pendarvis, who is hosting this year’s Black Pride festival on Sunday, May 25, at the Francis-Stevens Campus, is also not one to hold his tongue, particularly when it comes to serious issues affecting the LGBT community, such as mental health, addiction, homelessness and other topics routinely considered “taboo” or that might be uncomfortable to address. And in his frank yet unfiltered manner, he’s not afraid to take the community to task for what he sees as its shortcomings.

Above all, Pendarvis’s message is one of universal love. Love for family, love for each other, love for God, and an appreciation of life’s blessings. From hosting a yearly black-and-white affair that not only serves as a birthday celebration for him and four close friends, but a fundraiser for the Wanda Alston House for LGBT homeless teens to his stories about the joys and pitfalls of parenting and his flair for charming even the most hostile of audiences and bringing them to his side, it is apparent that Pendarvis lives his life by the Golden Rule.

“No matter where we go in life, take a moment to look back and pull someone else up,” he says. “Whether it is to give them a kind word, a warm meal, an old coat, or just to sit and have a great conversation. Pulling somebody up. That’s what’s important.”

METRO WEEKLY: If I ask you the question, “Who is Rayceen Pendarvis?” what’s your response?

RAYCEEN PENDARVIS: A child of God who cares about my community.

MW: And why have you been involved particularly with black LGBT causes?

PENDARVIS: Well, in order to celebrate all of me, I have to embrace the part of me that you see, which is a person of color who happens to be LGBT. But that’s not only just me. I think I embrace all sides of our community — LGBT, white, black, Latino, trans — wanting to make a difference for everybody.

MW: How do you personally identify?

MW: When did you first realize or recognize that you were part of the LGBT community? Tell me what that was like. How old were you when you first knew?

PENDARVIS: Oh, my God. I think you always have an inkling. And when you finally come to grips with it, and understand who you are, it frees you. So I think the moment I decided to be free was in high school. Once I came out, I realized I was free.

I think coming out during the time — I have been around for quite some time, ’60s to ’70s to ’80s to ’90s, and the new millennium — was a wonderful time. It was a great time for change, because so many people were fighting for so many causes. And I think it was a great time coming out. I can only describe it as liberating.

MW: You say you’re a father to five and a mother to many.

PENDARVIS: I’m a father of five, can you believe that? And a grandfather of two. And raising children has been one of my greatest rewards in life.

MW: How old are your children?

PENDARVIS: Am I married? No. I was never married. I’m a widow, honey. I lost my partner five years ago. He was the greatest love of my life — David Davis. And having him in my life for 20 years was a blessing. It allowed me to show our community, and especially young people, the value of love. And that you can have it, and you’re worthy of it, and you deserve it. My children adored him. It was a wonderful experience, to have him around, and raising kids, and then have a second set of children. I helped raise my brother’s children. That was a blessing. And now they’re having children.

John Riley is the local news reporter for Metro Weekly. He can be reached at jriley@metroweekly.com
← Previous Story The 2014 Next Generation Awards
Next Story → Michael Urie: Funny Guy