From a news-making parade to an extensive -- and extended -- festival, last weekend's 39th annual Capital Pride had it all

A pro-football player, a group of active duty military officers and several nationally known drag queens all walk into a gay pride event…

It has all the makings of a good joke. And certainly the gay pioneers at Stonewall 45 years ago could not have conceived that such a gathering would ever be real. You can just imagine them laughing at the setup: “Nationally known drag queens? Now that’s a hoot!” 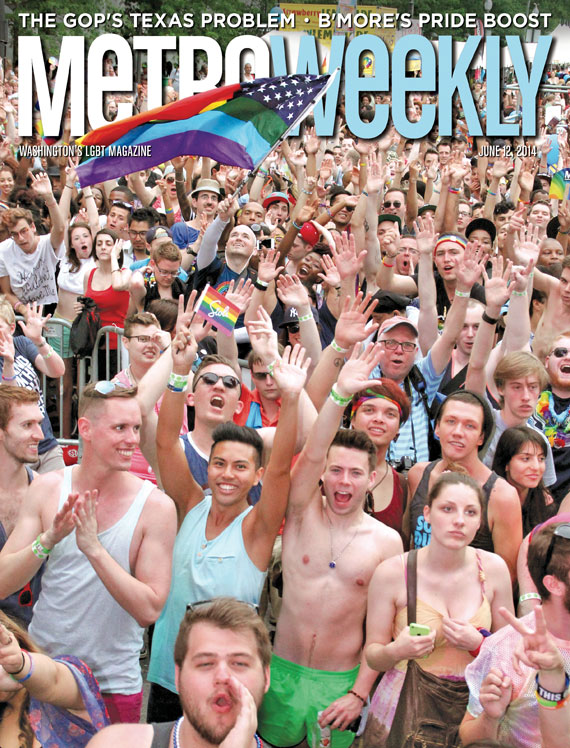 As it turns out, last weekend’s Capital Pride was a hoot and a half — all that and more. In excess of a quarter of a million people attended all or part of the festivities, according to Bernie Delia, board president for the organization putting on the 39th annual event. “It’s hard to break it down between Saturday and Sunday as to how many there were,” he told Metro Weekly, “but it was a tremendous number of people.” 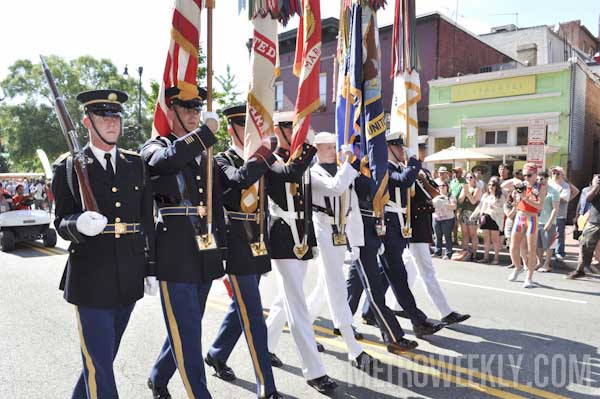 And this year, Capital Pride became the first gay parade in the nation to be kicked-off by an eight-man U.S. Armed Forces Color Guard. “We were very, very happy and thankful to the Defense Department that they granted our request,” Delia says. “I heard from a number of people who had served in the military at a time when it was not okay to be open about who you are, and they were extremely emotional and very, very thrilled that this happened.” The color guard was among this year’s nine parade winners, earning the Judge’s Award. Other winners included the athletic group DC Front Runners for Best Incorporated Theme (“Build Our Bright Future”), the bar Green Lantern for Best Decorated Float, and the Lesbian & Gay Big Apple Corps Marching Band for Best Marching Contingent. 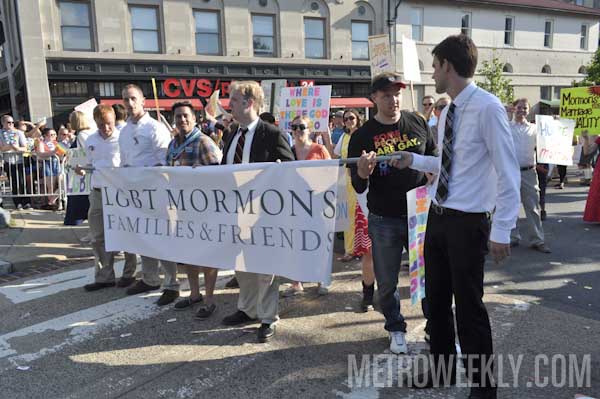 Bucking the antigay policies of its owners’ Mormon faith, Marriott International was the lead sponsor for this year’s parade, which also saw, among other marchers, the group Mormons for Marriage Equality. The Maryland-based hotel giant also had a large booth set-up as a lounge of sorts at Sunday’s festival on Pennsylvania Avenue. The ramped-up involvement and sponsorship of this year’s Capital Pride is part of the company’s new #LoveTravels campaign targeting the LGBT community and touted as an extension of the company’s internal culture.

“We celebrate the spirit of LGBT inclusiveness within Marriott, and wanted to share that spirit with everyone at the parade and the festival,” Kristine Friend, the company’s director of segment marketing, said in an emailed response. 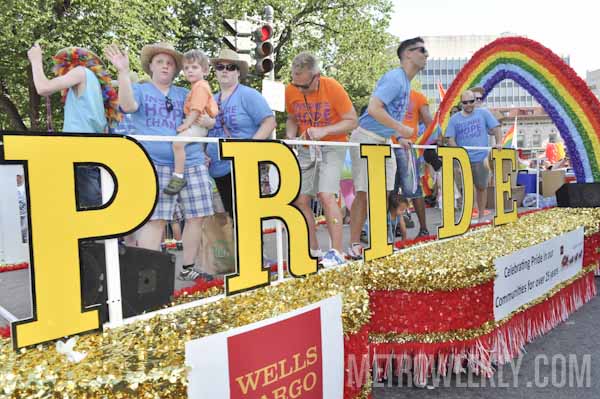 Capital Pride’s Delia argues that the increased involvement of corporations, which this year included AT&T, Hilton Hotels & Resorts, PNC Bank, and Food Lion, is welcome beyond the simple fact that their support helps fund such a large, elaborate event. “Corporations that for years ignored us at best are now very much seeking to be a part of the community,” Delia says. “I think that their participation helps to increase and grow the acceptance that we have encountered significantly over the last few years.”

In fact, these days one of the very few openly vocal opponents of the LGBT cause is the Kansas-based Westboro Baptist Church, a small contingent of which stood with their signs bearing messages like “God Hates Fags” and “God Hates You” along the parade route. But even with a megaphone, they had trouble being seen or heard by marchers, as LGBT supporters shouted louder and stood in greater numbers directly in front of them. 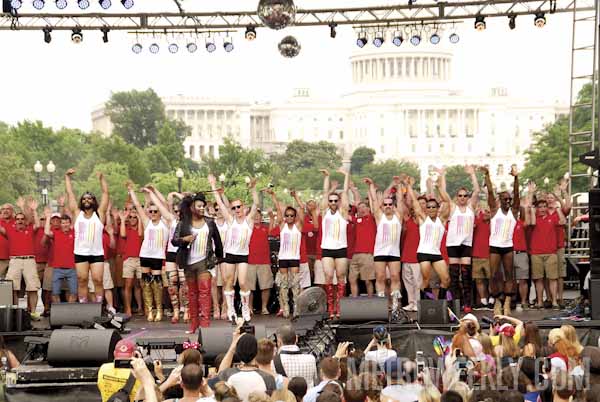 The vibe throughout the weekend was generally positive, and Sunday’s festival was especially convivial — so festive and fun that many ended up staying longer than they had planned. Of course, aiding in those decisions was the fact that the main Capitol Stage show started an hour late and ended more than two hours later than 7 p.m. as originally planned — all-but cancelling the two-hour street dance party with DJ Tracy Young, who only got to spin two songs. “We’ll have her back for something else,” Delia says, adding that organizers will be reviewing the “technical glitches” that contributed to the festival’s overlong run. “We’re going to take a really close look at where the disconnects were in terms of the technical aspects that set us behind.” 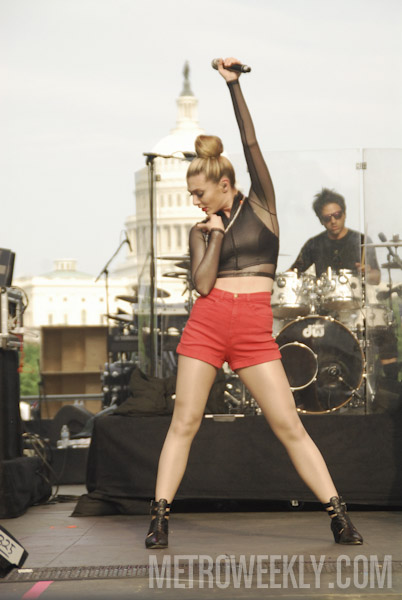 Still, this year’s lineup turned out to be consistently strong, with nearly everyone turning in dazzling performances, from Karmin to the local Enkore Dance Company to those nationally known drag queens from season six of RuPaul’s Drag Race — finalists Adore Delano, Courtney Act and Darienne Lake, and winner Bianca del Rio, the self-styled insult comic who cracked that the festival was “a three-hour event turned into a Jerry Lewis Telethon.” Even many of the headliners stuck around and simply hung out at the festival — most notably Betty Who, who performed early but stuck around until the very end, often seen carousing in this year’s new elevated VIP area.

But the Capital Pride festival has grown well beyond its mainstage set up near the intersection of 3rd Street and Pennsylvania Avenue NW. From photo booths to lounges with comfortable chairs, even recliners, more and more of the festival exhibitors have gone beyond simply staffing a table with literature to attract visitors. The most interactive and best furnished was the National LGBT Museum’s pavilion called “The Future Is Here,” which included a family area especially for kids and a central community area for people to congregate with furnishings provided by Mitchell Gold + Bob Williams and Flor. 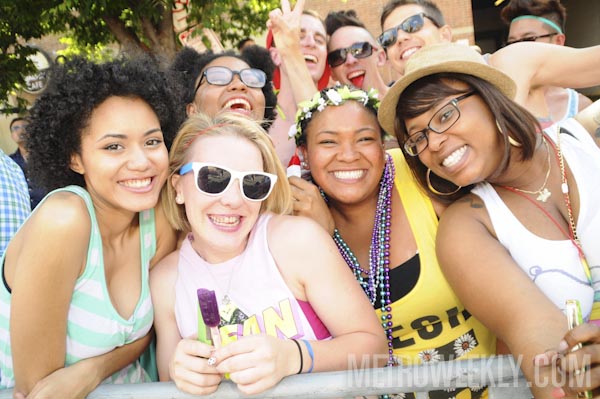 The museum’s booth also had a “Time Machine” area for individuals to record their personal stories, something people were over-eager to do. “We’re booked solid until 8 o’clock and the festival ends at 7,” marveled Tim Gold of the Velvet Foundation. The foundation is leading the campaign to establish a national LGBT museum in Washington, with a target date of 2018. Gold told Metro Weekly a location will hopefully be secured and ready to announce by the end of this year.

Just think back again on those original Stonewall pioneers, and how incredulous they’d be to hear all of this – a festival where gay people tell the world their stories and kids color away, all while protesters are held at bay? We’re not in Kansas anymore, that’s for sure.

For more information on Capital Pride’s events throughout the year, including volunteering for next year’s event, visit capitalpride.org.

Metro Weekly also has video performances of the festival headliners. 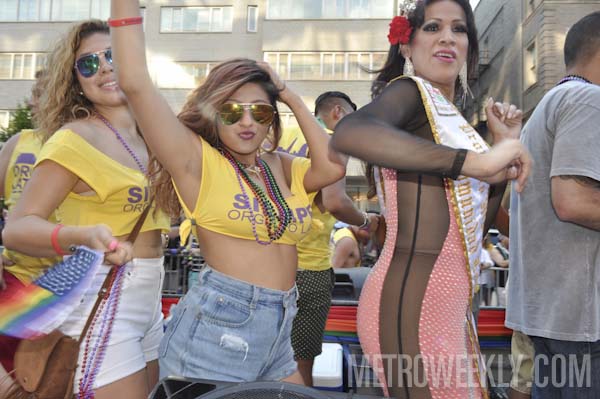