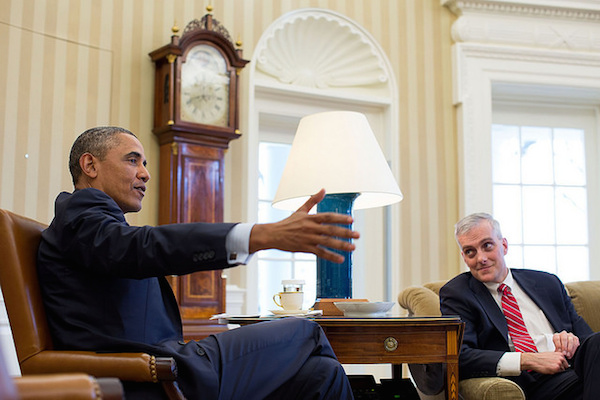 Leaders of several of the nation’s largest LGBT-rights organizations, many of which have been pressing Obama for more than six years to sign an executive order prohibiting federal contractors from discrimination on the basis of sexual orientation or gender identity since, as well as members of Congress, said Obama’s actions will have sweeping consequences.

“By issuing an executive order prohibiting federal contractors from discriminating against LGBT people, the President will not only create fairer workplaces across the country, he will demonstrate to Congress that adopting federal employment protections for LGBT people is good policy and good for business,” said Chad Griffin, president of the Human Rights Campaign. “The White House statement today is promising, and we look forward to seeing the details of the executive order.”

According to Sen. Jeff Merkley (D-Ore.), the lead sponsor of the Employment Non-Discrimination Act (ENDA) in the Senate, Obama’s move also increases pressure on the House of Representatives to act.

“Most Americans don’t know that it’s still legal in many states to fire someone for their sexual orientation or gender identity. That’s because it not only defies common sense, it goes wholly against who we are as a nation,” said Merkley, who was one of 220 lawmakers — 168 members from the House of Representatives and 52 senators – to urge Obama earlier this year to sign the executive order while they continue to work on passage of ENDA. “No more excuses. It’s way past time for Speaker Boehner to allow ENDA to have a vote in the House. No one should be fired because of who they are or whom they love.”

That was a view echoed by House Minority Leader Nancy Pelosi (D-Calif.), who said the protections that will be secured by Obama’s signing of an executive order must apply to every worker — not just federal contractors.

“With this executive order, the President will act to reaffirm the great truth of our nation; that no matter who we are, where we come from, what we believe, or who we love, all men and women are created equal and stand together under a single banner: E pluribus unum.  ‘Out of many, we are one,’” Pelosi said in a statement. “As our nation marches towards justice and equality for LGBT Americans, it is disappointing that House Republicans continue to stand on the wrong side of history.  Republicans should stop blocking a vote on the bipartisan Employment Non-Discrimination Act that passed the Senate, and make these essential protections the law of the land.”

The Senate approved ENDA 64-32 last November, but the the bill has languished in the Republican-controlled House of Representatives where Speaker John Boehner has voiced his opposition to the bill and refused to allow it to come up for a vote, although the bill has continued to gain bipartisan support as recently as last week. In 29 states it is legal to fire or refuse employment to someone based on their sexual orientation and in 32 states it is legal to do so based on their gender identity. About 20 percent of the American workforce, amounting to around 28 million workers, is employed by federal contractors.

“Countless LGBT workers across the country will be able to rest easier once a strong executive order is in place, but there is no denying that the time has come to do even more,” HRC President Chad Griffin added. “The House of Representatives must seize this opportunity to immediately pass the Employment Non-Discrimination Act, and we will continue to fight for the greatest number of civil rights protections for the greatest number of LGBT people around the country.”

The White House has not yet indicated when Obama will sign the executive order, but its enactment will have immediate consequences for some of the nation’s largest federal contractors.

“The most immediate impact of this news should be felt at ExxonMobil’s corporate headquarters in Dallas, where the Exxon executives who have fought against LGBT protections for years will finally have to reconsider their retrograde position if they want to continue profiting from hundreds of millions of dollars in taxpayer-funded contracts,” said Tico Almeida, president of Freedom to Work. “We predict Exxon will finally cave to pressure.” Last month ExxonMobil shareholders voted for the 17th year to reject LGBT workplace protections.

“This order will bring much-needed relief to ExxonMobil’s LGBT employees,” Griffin said, “Year after year, ExxonMobil has held the lowest spot in HRC’s Corporate Equality Index — the first and only company to receive a negative score.”

Federal contractors are already prohibited under existing executive orders from discrimination on the basis of race, color, religion, sex and national origin. When Obama expands those protections to include sexual orientation and gender identity, GetEQUAL Co-Director Heather Cronk said it will be imperative it does not include the same religious exemptions that have long been a point of contention for ENDA.

“It is now vitally important for all of us to insist that this executive order, when eventually signed by the president, does not include religious exemptions that would permit taxpayer dollars to be spent on discrimination,” Cronk said in a statement. “We will continue to be vigilant about this important aspect of the executive order — LGBT Americans need these protections immediately, and without the gaping holes that exemptions would create.”