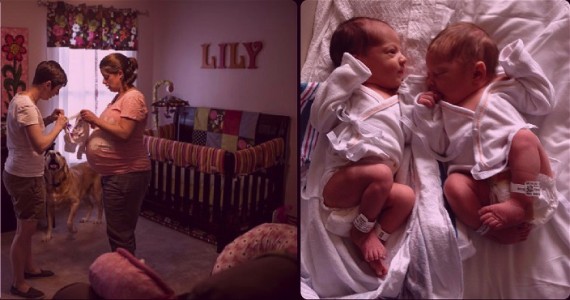 Stephanie and Desiree Bryan (left) and their twins, Lily and Mia (photo courtesy of Equality Virginia).

Equality Virginia, the commonwealth’s major LGBT-rights organization, launched the first of five planned blog posts highlighting the stories of same-sex couples raising children who have encountered difficulties due to Virginia’s prohibition on second-parent adoption by same-sex couples, which stems from a constitutional amendment that bans the commonwealth from recognizing any same-sex marriage or form of same-sex relationship that is similar to marriage.

The first blog post, written by Stephanie Bryan, tells the story of how Bryan and her wife, Desiree Bryan, became pregnant with twin girls, Lily and Mia. But because Virginia law would not recognize Stephanie as a parent – even though the children are biologically hers but were implanted and carried to term by Desiree – the couple was forced to make plans to travel to D.C. for the delivery, so that both women would be legally recognized as the twins’ parents.

“We didn’t choose to leave Virginia so I could be recognized as their parent on paper,” Stephanie writes. “It is so much more than that. It was to protect the basic rights of our daughters, so they can grow up in a family that is secure as those around us. It was so if I die, they will have access to my social security benefits. It was so in case we encounter less-than-friendly doctors or school officials that both Desiree and I have the responsibilities of legal parents – and the paperwork to prove it. If Virginia recognized second-parent adoptions, I could have had all the rights of a parent without having to leave the Commonwealth. …Right now, the laws in Virginia create different classes of families, even within lesbian couples: those who give birth in D.C., and those who don’t, either by choice or by circumstance.”

Kirsten Bokenkamp, a spokeswoman for Equality Virginia, said the organization plans to highlight the five different stories, which include a male couple and a female couple who can compare their experience adopting one child in New York and another in Virginia, to help gain support for bills expected to be introduced during next year’s General Assembly session that would allow second-parent adoption by a person other than a legally recognized spouse. Two similar bills – SB336, sponsored by Sen. Janet Howell (D-Arlington, Fairfax counties) and HB1113, sponsored by Delegates Joseph Yost (R-Radford, Giles, Montgomery, Pulaski counties), Gordon Helsel (R-Poquoson, Hampton, York Co.) and Tom Rust (R-Fairfax, Loudoun counties) – were tabled in their respective committees in January, when Republicans temporarily controlled both chambers prior to two special Senate elections won by Democrats.

Bokenkamp said the second-parent adoption blog will be updated with a new story every Monday.

But Equality Virginia will have to rely on building enough momentum among grassroots supporters, as the organization will likely face an uphill battle during next year’s session. The House of Delegates remains solidly Republican, with the GOP holding a 68-32 edge. In addition, the recent retirements of two Democratic senators, Sen. Phil Puckett (D-Radford, Norton, Pulaski, Tazewell, Buchanan, Dickenson, Russell, Smyth, Wise counties) and Sen. Henry Marsh (D-Richmond City, Hopewell City, Petersburg, Chesterfield, Prince George, Dinwiddie counties), have thrown the upper chamber back into Republican control, with Puckett’s seat likely to be picked up by the Republicans in an Aug. 19 special election. Republicans will then maintain control of the Senate 21-19 and will later determine committee assignments for the Committee on Rehabilitation and Social Services, the committee to which the second-parent adoption bill will be referred.

An expected ruling by the Fourth Circuit Court of Appeals on a challenge to Virginia’s constitutional ban on same-sex marriage – which was declared unconstitutional by a federal judge in February – could also affect the second-parent adoption bill if the ruling is broad enough to force the commonwealth to recognize same-sex relationships. That ruling is expected in the coming weeks.

Still, Equality Virginia Executive Director James Parrish is unrelenting in his advocacy for the second-parent adoption bill, and has promised to promote efforts aimed at informing people about the disparities in the commonwealth’s adoption laws and rallying supporters to lobby their delegates and senators to change the laws.

“Unfortunately, the current law in Virginia leaves many children as legal strangers to their own mother or father. It simply doesn’t make sense,” Parrish said in a statement. “Equality Virginia’s new blog series on second-parent adoption is a way for parents to share their own stories and to highlight both the absurdity and discriminatory nature of this law.”

“Currently, there is a murky area where some same-sex parents are recognized under Virginia’s law, but others are not,” Parrish continued. “That’s ludicrous, creates two classes of families and hurts our children. The law needs to change, and it is something Equality Virginia will be working toward in the 2015 General Assembly session.”

John Riley is the local news reporter for Metro Weekly. He can be reached at jriley@metroweekly.com
← Previous Story Pannell Seeks School Board Seat
Next Story → Lateefah Williams Enters AG Race