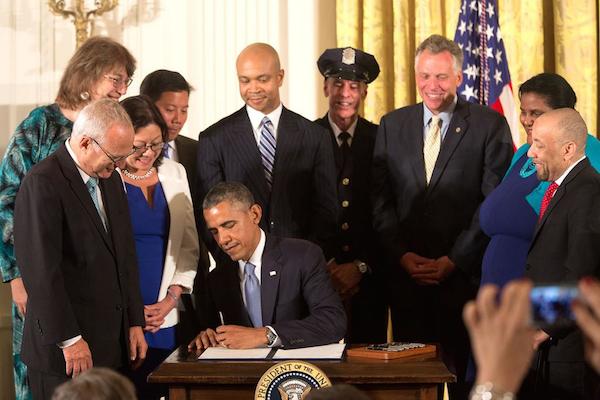 During a signing ceremony in the East Room of the White House, Obama remarked on the years of lobbying efforts advocates have taken to convince the Obama administration to not only support federal legislation that would prohibit LGBT workplace discrimination, such as the Employment Non-Discrimination Act (ENDA), but also an executive order for federal contractors.

“Many of you have worked for a long time to see this day coming. You organized, you spoke up, you signed petitions, you sent letters — I know because I got a lot of them,” Obama told an audience that included many leaders of the LGBT-rights movement as well as champions of ENDA such as Sens. Tammy Baldwin and Jeff Merkley. “And now, thanks to your passionate advocacy and the irrefutable rightness of your cause, our government — government of the people, by the people, and for the people — will become just a little bit fairer.”

Obama’s executive actions will impact 24,000 companies that employ 28 million workers — a fifth of the nation’s workforce, according to a senior administration official.

The executive order protecting transgender federal employees from discrimination will take effect immediately, whereas the executive order prohibiting federal contractors from LGBT workplace discrimination will apply only to federal contractors who enter a contract with the federal government after a date designated by the Department of Labor. According to the senior administration official, the executive order requires the Labor Department to prepare regulations within 90 days and the order will likely be fully implemented by early 2015.

Moreover, Obama’s executive order does not modify an executive order signed by President George W. Bush in 2002 that allows religiously affiliated federal contractors to favor individuals of the same faith in their hiring practices — something LGBT-rights advocates have called on Obama to change since taking office.

“For more than two centuries, we have strived, often at great cost, to form ‘a more perfect union’ — to make sure that ‘we, the people’ applies to all the people,” Obama said Monday. “Many of us are only here because others fought to secure rights and opportunities for us. And we’ve got a responsibility to do the same for future generations. We’ve got an obligation to make sure that the country we love remains a place where no matter who you are, or what you look like, or where you come from, or how you started out, or what your last name is, or who you love — no matter what, you can make it in this country.”

The White House announced on June 16 that Obama would sign the executive order prohibiting federal contractors from LGBT workplace discrimination — a move long sought by LGBT-rights advocates that has garnered increased attention as federal legislation remains stalled in Congress. On June 30, at the White House’s annual LGBT Pride Month reception, Obama also announced his plans to sign an executive order protecting transgender federal employees from discrimination. Obama’s actions Monday were greeted with applause by LGBT-rights advocates who have been pressuring for such action since Obama was a candidate for president in 2008 and indicated he would sign such an executive order.

“With this action, President Obama has cemented his legacy as a transformative leader,” said Chad Griffin, president of the Human Rights Campaign, in a statement. “Consistently, this administration has taken unprecedented and historic executive actions to advance LGBT equality in this country and around the world.”

Indeed, Obama’s executive order appears to have solidified his legacy on LGBT rights. According to Griffin, focus now returns to the House of Representatives, where ENDA has been blocked by Republican leaders since it was approved with a 64-32 vote by the Senate in November. Since then, a fight over the scope of ENDA’s religious exemption has broken out among several LGBT-rights groups.

During his remarks Monday, Obama urged advocates to maintain pressure on Congress.

“Congress has spent 40 years — four decades — considering legislation that would help solve the problem. That’s a long time. And yet they still haven’t gotten it done,” Obama said. “But I’m going to do what I can, with the authority I have, to act. The rest of you, of course, need to keep putting pressure on Congress to pass federal legislation that resolves this problem once and for all.”

Tico Almeida, founder and president of Freedom to Work, said a clock has now started ticking for corporations, such as ExxonMobil, that do work with the federal government but do not prohibit LGBT workplace discrimination.

“President Obama’s signature sends a strong message: update your workplace policies to protect LGBT employees or forfeit your highly lucrative taxpayer-funded contracts. This is a watershed moment in our country’s march toward equality,” Almeida said in a statement.

Before sitting down to sign the long-sought executive order, Obama took note of the many steps toward full LGBT equality that have been taken since he assumed office.

“We’ve got a long way to go, but I hope as everybody looks around this room, you are reminded of the extraordinary progress that we have made not just in our lifetimes, but in the last five years. In the last two years. In the last one year,” Obama said. “We’re on the right side of history.”

Read Obama’s full remarks on the next page.