By Troy Petenbrink on July 7, 2014 @thegaytraveler

The Independence Day pool party fundraiser for CAMP Rehoboth matched last year’s attendance despite being postponed a day due to Hurricane Arthur. About 600 attendees came together on Saturday afternoon for the annual event to support the LGBT community center of Rehoboth Beach, Del. 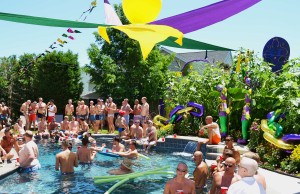 This year’s party had a Mardi Gras theme with lots of beads being donned by the guests, who were hosted at the beach home of partners and Washingtonians Mike Deflavia and Tony Sowers and a network of their friends. DJ Mike Reimer once again provided the entertainment.

Deflavia and Sowers have been organizing popular themed house parties each summer in Rehoboth for more than a decade. In 2010, they began using their parties to collect donations for CAMP Rehoboth. Since that time, the parties have helped raise tens of thousands of dollars in much needed funds. The exact total raised from this year’s event is not yet available but it is estimated to be near the $10,000 raised in 2013.

Celebrating its 24th year, CAMP (an acronym for “Create a More Positive”) Rehoboth’s mission is to create a more positive environment in Rehoboth and its related communities. It seeks to promote cooperation and understanding among all people, as it works “to build a safer and more inclusive community with room for all.” 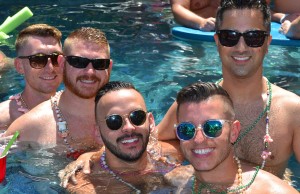 Upcoming fundraisers for CAMP Rehoboth include its annual Sundance auction and dance party during Labor Day Weekend and a special performance by the all-male string quartet Well-Strung on September 26.

Rehoboth has a rich history as a gay-friendly destination dating back to the 1940s. Travel Channel recently named Rehoboth a top beach destination for LGBT travelers.