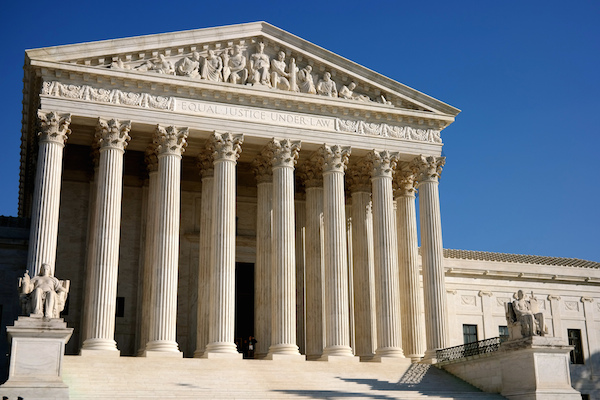 Attorneys for the couples fighting Virginia’s ban on same-sex marriage urged the U.S. Supreme Court Wednesday to hear their case, describing it as “excellent vehicle for authoritatively resolving” the constitutionality of state bans on same-sex marriage.

Responding to a motion made earlier this month by Virginia Attorney General Mark Herring asking the Supreme Court to hear Bostic v. Schaefer, the attorneys for the plaintiffs concurred, despite winning at the federal appeals court level.

“Although the Fourth Circuit’s decision is correct, review is warranted because this case presents a question of exceptional, nationwide importance that is the subject of ongoing litigation in dozens of jurisdictions,” the motion states. “Like Virginia’s Marriage Prohibition, each of the same-sex marriage bans being challenged in those jurisdictions prevents tens of thousands of gay and lesbian Americans from exercising their fundamental right to marry the person they love and to enter into ‘the most important relation in life.’”

The motion continues, “The question whether the Fourteenth Amendment tolerates such discrimination against gay men and lesbians is an issue of national significance that should be settled promptly and definitively by this Court.”

On July 28 the 4th Circuit Court of Appeals ruled 2-1 to uphold a lower court’s ruling finding unconstitutional Virginia law prohibiting same-sex marriage and recognition of same-sex marriages performed in other states. Herring, a Democrat who opposes Virginia’s same-sex marriage ban, filed a petition for writ of certiorari on Aug. 8 calling on the Supreme Court to hear the case and answer the question it raises: “Whether Virginia violates the Due Process and Equal Protection Clauses by denying the right of marriage to same-sex couples and by refusing to recognize same-sex marriages lawfully performed outside of Virginia.”

Although winners generally do not appeal, in their filing with the Supreme Court the attorneys for the two same-sex couples challenging the Virginia ban argue the case could have far broader implications.

“Indeed, for gay and lesbian Americans who seek to marry — and their families — there is no more important question. And until this Court conclusively resolves that issue, same-sex couples who reside in jurisdictions where lower-court decisions invalidated discriminatory marriage laws will be forced to live with the ever-present specter that this Court might ultimately reject the rulings that authorized them to marry—paving the way for the reimposition of discriminatory marriage laws,” the motion states. “Similarly, without a nationwide ruling from this Court, gay and lesbian couples who currently reside in States that recognize marriages between individuals of the same sex face the prospect that their marriages will no longer be recognized if they move to another State that continues to prohibit such marriages. Gay and lesbian Americans deserve to have their marriage rights settled once and for all by this Court.”

Last Wednesday, the Supreme Court put same-sex marriages in Virginia on hold, hours before they were set to start. The stay will be lifted either once the Supreme Court denies to hear the case or after judgment is issued by the high court.

Bostic v. Schaefer was originally filed on behalf of two same-sex couples in July 2013 by the legal team that challenged California’s Proposition 8, including the American Foundation for Equal Rights (AFER) along with attorneys Ted Olson and David Boies. The American Civil Liberties Union (ACLU) and Lambda Legal joined the case in March on behalf of all of Virginia’s same-sex couples.

“Forty-seven years ago, Mildred and Richard Loving passionately argued that the Supreme Court must end the unjust laws that dare to tell us who we can and cannot love,” Olson said. “Today, almost half a century later, it is time thousands of gay and lesbian couples across America are extended that same promise of equality and freedom that the Supreme Court granted to the Lovings. Our plaintiffs have already fought for, in two separate courts, a constitutional promise they have been denied. Now, the Supreme Court must take up the Bostic case, answer once and for all the surpassingly important constitutional question of marriage equality, and rule decisively in favor of the fundamental right to marry for every same-sex couple.”

In their motion with the Supreme Court, attorneys for the plaintiffs also argue the high court’s review is “acutely needed” to settled the constitutional question raised by the Proposition 8 case, Hollingsworth v. Perry, which the Supreme Court reviewed but never reached the merits of after deciding supporters of California’s same-sex marriage ban did not have standing to petition the Supreme Court.

“This case would allow the Court to address both the constitutionality of prohibitions on same-sex marriages and the constitutionality of prohibitions on the recognition of such marriages performed in other States,” the motion states. “In addition, it involves both individual plaintiffs suing in their own right and a class of gay and lesbian Virginians, and arises in an adversarial posture where the views of all sides are being vigorously represented, including by multiple clerks charged with enforcing Virginia’s marriage laws and by the Commonwealth’s Attorney General. The case therefore does not present any of the jurisdictional impediments that prevented this Court from reaching the merits of the constitutional question in Hollingsworth.”

Since June 2013, when the Supreme Court dismissed the Proposition 8 case and struck down Section 3 of the federal Defense of Marriage Act defining marriage as between a man and a woman in U.S. v. Windsor, marriage equality has witnessed an unbroken string of federal court victories. District courts have fruled in favor of marriage equality in Utah, Ohio, Oklahoma, Kentucky, Idaho, Illinois, Indiana, Michigan, Pennsylvania, Tennessee, Texas, Virginia, Oregon, Wisconsin, Indiana, Colorado and Florida. Federal appeals courts have upheld those rulings in Utah, Oklahoma and Virginia — all of which the Supreme Court has been asked to review — with more appellate courts expected to rule soon.

Despite those wins, attorneys for the Virginia plaintiffs argue an “even greater number of gay and lesbian Americans live in States that continue to deny them the right to marry and continue to denigrate them, and their families, as second-class citizens.”

“Each and every day, those Americans are reminded that, in the eyes of the law, their relationships are inferior and unworthy of recognition,” the motion states. “Such officially sanctioned intolerance should not be countenanced in any State of the Union. The Court should grant review and extinguish this discrimination forever.”

Bostic Brief in Support of Certiorari