In Entebbe on August 9, more than one hundred LGBT Ugandans celebrated the first Pride Uganda since the Constitutional Court overturned the draconian Anti-Homosexuality Act (AHA) for being passed without a quorum. Entebbe is on Lake Victoria, and the paradise suggested by some of the photos would not make you think the revelers risked mob violence, unless you noticed the masks some wore.

A British name for an African lake is a relic of the same colonial legacy that keeps homosexuality illegal despite AHA being tossed out. African leaders are strangely selective in their outrage over Western influences. They embrace foreign laws, religions, and aid while treating sexual minorities who have always lived among them like hostile aliens. American evangelicals like Scott Lively incited the persecution with the slander that gays recruit and sexually abuse children. This pious vulture denies any responsibility for the consequences, including LGBT Ugandans being hunted like animals.

Two of the marchers at Entebbe held a rainbow flag with the words, “Join hands to end LGBT (Kuchu’s) genocide.” An openly gay church minister attended. Sexual Minorities Uganda leader Frank Mugisha (who was praised on August 4 at a global town hall in Washington by Secretary of State John Kerry) dressed as a pirate. The Guardian reported dancing, music and laughter, with no anti-gay protesters.

The danger is not past. The August 1 court ruling is being appealed to the country’s Supreme Court, and supporters of the anti-gay bill have demanded its re-passage, though President Museveni reportedly wants to water it down. Meanwhile in Kenya, a new anti-gay bill calls for public stoning. The LGBT activists’ demonstrations are a remarkable display of courage in the face of threats to life and liberty. 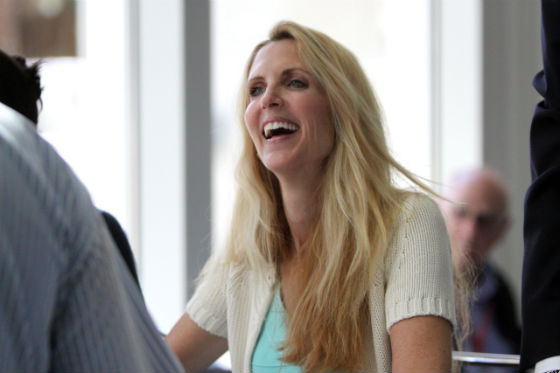 Meanwhile, the deadly Ebola outbreak in West Africa has brought out the best and worst in people. As for the worst, Ann Coulter (who I doubt believes anything) mocked and scorned a stricken American “Ebola doctor” for having gone to Africa at all. She described Dr. Kent Brantly as “marinating himself in medieval diseases of the Third World.” For backwardness she can look closer to home, where screaming headlines in New York tabloids invited a mass panic reminiscent of plague scenes in a 19th century novel.

Coulter calls countries like Liberia “disease-ridden cesspools” and labels doctors like Brantly “Christian narcissists.” She asks, “Can’t anyone serve Christ in America anymore?” Peter Wehner of the Ethics and Public Policy Center rebukes her: “For individual Christians to sacrifice their own lives of comfort and ease to help ‘the least of these,’ on whatever continent they are found, is among the higher callings of the faith. It ranks even above writing books like Treason, Slander, Demonic and If Democrats Had Any Brains, They’d Be Republicans.”

Coulter’s America-centric perspective not only offends missionaries everywhere, it overlooks the tireless efforts of African doctors in battling Ebola. Courage and selflessness are not uniquely Western virtues.

The radical right’s misuse of religion is not restricted to Africa. When President Obama announced airstrikes and humanitarian aid in Iraq in response to atrocities by the Islamic State of Iraq and the Levant (ISIL), Bryan Fischer of the American Family Association accused Obama of ignoring anti-Christian persecution while protecting devil worshippers. Here Fischer repeats a libel by ISIL against the Yazidis, an ancient sect whose beliefs resemble Zoroastrianism (and are not about devil worship). The claim that Obama ignores the plight of Christians is another lie. But for Fischer, ISIL’s rampage is merely an excuse to stoke sectarian strife.

If Fischer wants to see the devil, he should look in the mirror. But the Yazidis would not say this, despite facing genocide at the hands of radical Islamists egged on by an American Christian. They believe that each of us contains both good and evil. They would hold out hope even for Bryan Fischer.

← Previous Story Blood on a Beach
Next Story → Excessive Force