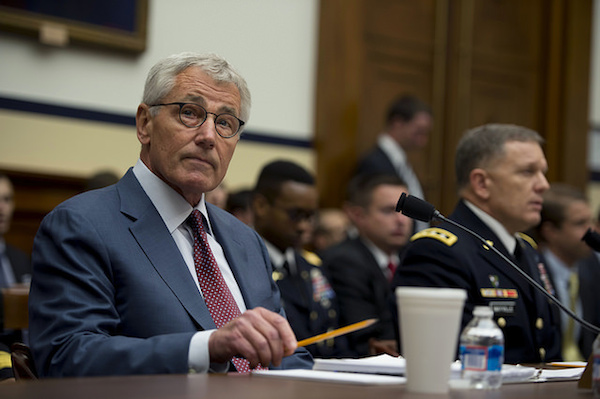 Lawyers for Chelsea Manning filed a lawsuit against Secretary of Defense Chuck Hagel and other Defense Department and Army officials in federal court Tuesday for failing to provide the transgender woman with necessary medical treatment.

“The government continues to deny Ms. Manning’s access to necessary medical treatment for gender dysphoria, without which she will continue to suffer severe psychological harms,” said Chase Strangio, attorney in the ACLU Gay Lesbian Bisexual and Transgender project and co-counsel for Manning, in a statement. “Such clear disregard of well-established medical protocols constitutes cruel and unusual punishment.”

The lawsuit filed in U.S. District Court for the District of Columbia seeks “declaratory and injunctive relief to redress Defendants’ refusal to provide Plaintiff with medically necessary treatment in violation of Plaintiff’s rights under the Eighth Amendment to the United States Constitution.”

“Defendants have violated the Constitution by denying Plaintiff medically necessary treatment for her diagnosed gender dysphoria, a serious medical condition,” states the lawsuit, which was filed by the American Civil Liberties Union (ACLU), the ACLU of the Nation’s Capital, the ACLU of Kansas and civilian defense attorney David Coombs.

In August 2013, Manning was sentenced by a military judge to 35 years in prison for providing more than 700,000 government files to Wikileaks in one of the largest leaks of classified documents in American history. The judge who presided over Manning’s trial, Army Col. Denise Lind, also reduced Manning’s rank from private first class to the lowest in the military, ordered Manning forfeit all pay and be dishonorably discharged.

Manning came out as transgender in a statement shared by her lawyers one day after the sentence was handed down — the same day Manning was transferred to the U.S. Disciplinary Barracks at Fort Leavenworth in Kansas, where she has been confined to since. Reports indicated that the military would not provide transgender medical treatment, despite accusations from legal groups that failure to do so would be considered cruel and unusual punishment under the Constitution.

In an Aug. 11, 2014 letter sent to Defense Department officials, the ACLU threatened the Pentagon with a lawsuit if Manning was not provided medically appropriate treatment.

“Courts across the country have held that Gender Dysphoria is a serious medical condition and that the Eighth Amendment does not permit prisons to deny prisoners treatment for this condition (including hormone therapy and surgical procedures) without individualized treatment determination based on the specific medical needs of the prisoner,” the letter stated. “The Constitution also does not authorize prison officials to withhold medically necessary care from a prisoner because of the disapproval of governmental officials or their constituents of the individual or group needing treatment or the type of treatment needed.”

Tuesday’s lawsuit is accompanied by a motion for preliminary injunction demanding that Manning be provided hormone therapy, permission to follow female grooming standards, including dress and hair length, and access to treatment by a medical provider qualified to treat gender dysphoria.

“It is my hope that through this action, Chelsea will receive the medical care that she needs without having to suffer any further anguish,” Manning’s defense attorney, David Coombs, said in statement.

The lawsuit states that through the “purposeful and intentional actions” of Defense Department officials to deny treatment, Manning has “suffered and continues to suffer injury, including, without limitation, serious physical, psychological and emotional harm, mental anguish, distress, humiliation, and indignity.”