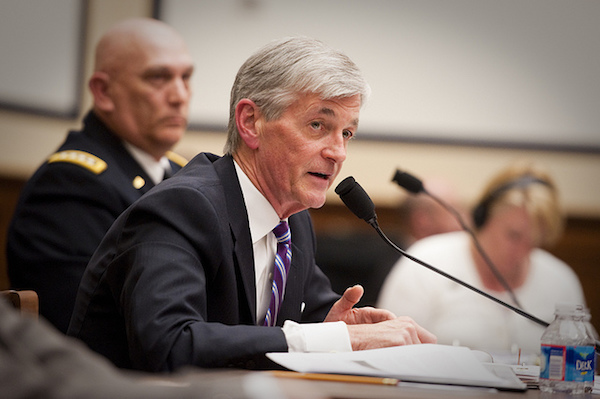 The Department of the Army engaged in discrimination against a civilian employee and veteran on the basis of her gender identity in violation of federal law, the U.S. Office of Special Counsel (OSC) found in a historic report announced Thursday.

According to the OSC investigation, Tamara Lusardi was subjected to “discriminatory harassment” at the hands of her supervisors after she announced her transition from male to female in 2010. Lusardi, a disabled veteran, worked as a software quality assurance specialist in the U.S. Army Aviation and Missile Research, Development and Engineering Center in Alabama. Following her transition, she was required to use a single-user, gender neutral restroom and barred from using the general restroom for her gender even when the single-user restroom was out of order. Her supervisors also “repeatedly failed to use her proper name and pronouns, and subjected her and her workplace conversations to increased review and scrutiny,” the report states.

“OSC finds that the acts at issue were sufficiently frequent, pervasive, and humiliating to constitute discriminatory harassment,” the report continued. “That is, the Agency’s intentional limitations on [Lusardi’s] restroom usage significantly changed her working conditions, as did her supervisor’s repeated use of her birth name and male pronouns and her manager’s targeted restriction of the content of her conversations with coworkers. We also find that the harassment stemmed from an abuse of the supervisor-subordinate relationship by Agency officials with the authority to take, recommend, and approve the actions at issue.”

The OSC, an independent federal investigative and prosecutorial agency, found “sufficient evidence in the record to conclude that the Agency unlawfully discriminated against [Lusardi] on the basis of her gender identity.” Such actions constituted a prohibited personnel practice in violation of the Civil Service Reform Act and U.S. Code protecting federal employees from discrimination on the basis of conduct in their personal lives that does not adversely affect their job performance.

The Army agreed to resolve the matter by providing remedial training to supervisors on prohibited personnel practices, particularly those prohibiting discrimination on the basis of gender identity. Sensitivity training focused on LGBT individuals will be provided to all employees at the Army organizations where Lusardi works as well. According to the OSC, the Army’s agreement to voluntarily resolve this matter does not constitute an admission that it committed a prohibited personnel practice against Lusardi.

“While many of [Lusardi’s] coworkers may have been navigating new terrain with respect to creating a welcoming workplace for LGBT colleagues, it is exactly those individuals who will benefit most from additional education on an increasingly important issue of workplace diversity and inclusion,” the report states.

“I applaud Ms. Lusardi for standing up not only for her rights, but for those of all federal employees,” said Special Counsel Carolyn Lerner in a statement. “The Army deserves credit for seeking to right the wrongs that Ms. Lusardi faced and for creating a more welcoming environment for its LGBT employees.”

“I am so grateful that justice is finally being served,” Lusardi said in a statement. “As a disabled veteran, I take great pride in my role protecting our soldiers from harm. Like anyone else, I just want the freedom to be myself at work. I hope my case and this decision will help other transgender people feel safe enough to bring their full authentic selves to work. This report makes clear that we don’t have to put up with being mistreated on the job just because of who we are.”

According to attorneys for Lusardi, the conclusion reached by the OSC is significant.

“The Office of Special Counsel’s report is groundbreaking in its conclusion that some of the most common forms of harassment faced by transgender people on the job should be recognized for what they are: unlawful discrimination,” stated Ilona Turner, legal director of the Transgender Law Center, which is representing Lusardi in this case as well a parallel discrimination case with the EEOC. “This decision makes clear that it’s not acceptable to deny a transgender employee access to the same restroom as everyone else, or keep calling her by her former name and pronoun for months after she transitions. It’s hurtful and stigmatizing, it’s discriminatory, and it violates federal law.”

The report by the OSC comes as part of a broader push by the federal government to end discrimination against LGBT people. The Macy decision finding discrimination against transgender people constitutes sex discrimination under federal law has been implemented by agencies such as the Department of Education and Department of Labor. Earlier this week, the Department of Labor submitted a finalized rule prohibiting federal contractors from LGBT workplace discrimination to the Office of Management and Budget (OMB). The rule implements the executive order signed by President Barack Obama in June banning federal contractors from discrimination on the basis of sexual orientation and gender identity. It is not clear how long the OMB review may take, but once implemented it will impact federal contractors, such as ExxonMobil, that still do not prohibit LGBT workplace discrimination. Earlier this week in Illinois, a hearing was held for a complaint filed against ExxonMobil by Freedom to Work alleging the company engaged in hiring practices that discriminated against qualified applicants with resumes that indicated they worked for LGBT organizations. In May, ExxonMobil shareholders met in Dallas and voted for the 17th year to reject LGBT workplace protections.

Read the OSC report below (Note: Lusardi is identified as “Jane Doe” in the report, but has consented to use her name):