Bill Clinton avoids the past in LGBT-rights speech 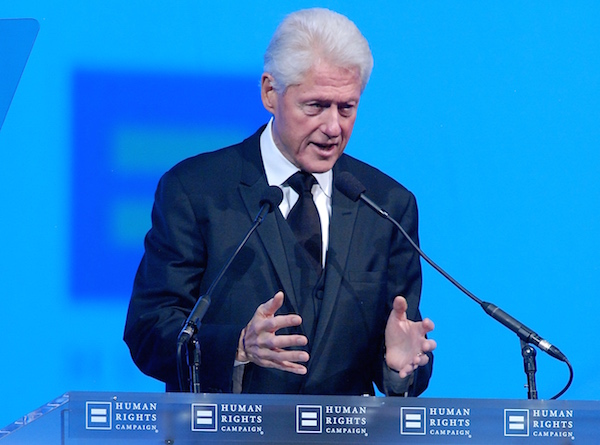 Bill Clinton returned to the Human Rights Campaign’s national dinner Saturday for the first time since 1997. For nearly 30 minutes, the former president thanked the 3,000 attendees for everything they’ve done to “move the country, to move the people, to move the heart and the mind.”

“One thing we have learned is that no human heart is immune to an honest outreach,” Clinton said, noting the support for same-sex marriage by former Vice President Dick Cheney, whose daughter is a lesbian. “No one can ignore their personal experience.”

Clinton was introduced by HRC President Chad Griffin, who worked in the press office of the Clinton White House, as “our friend, our hero.” But while Clinton spoke at length about the “poetry and prose” that has spurred the fastest moving civil rights movement he has ever seen, his own record on LGBT issues went largely unacknowledged. There was no mention of the Defense of Marriage Act nor “Don’t Ask, Don’t Tell,” both of which bear his name. And for those who have long waited for Clinton to say one word — “sorry” — the wait continued Saturday. Clinton’s silence on DOMA in particular seemed to be amplified by a surprise appearance by outgoing Attorney General Eric Holder, who highlighted the Justice Department’s expansive implementation of the Supreme Court’s Windsor decision striking down Section 3 of DOMA in June 2013. Holder also announced the federal government would recognize same-sex marriages performed in an additional six states: Alaska, Arizona, Idaho, North Carolina, West Virginia and Wyoming.

In recent years Clinton has worked to restore his LGBT-rights legacy. Although “Don’t Ask, Don’t Tell” can be defended as a compromise with Congress to the full ban on gay servicemembers, there is little defense that can be mustered for DOMA.

It was shortly after midnight on Sept. 21, 1996 when Clinton signed DOMA into law. Clinton, who was running for reelection, had just returned to the White House after a series of campaign stops. There was no signing ceremony nor cameras, and while Clinton had qualms about DOMA, he wasn’t willing to sacrifice his chances of reelection by vetoing the bill.

The bill, which defined for federal purposes marriage as between a man and a woman, had been approved by the House of Representatives 342-67 and by the Senate 85-14. Although the act was largely meaningless at first, that changed as the fight for marriage equality expanded. When Massachusetts became the first state to issue marriage licenses to same-sex couples in 2004, those couples were denied more than 1,000 federal benefits enjoyed by married straight couples because of DOMA.

In a statement released before signing DOMA into law, Clinton hinted at his qualms with the bill. ”Throughout my life I have strenuously opposed discrimination of any kind, including discrimination against gay and lesbian Americans,” Clinton said. ”I have long opposed governmental recognition of same-gender marriages and this legislation is consistent with that position.”

Clinton also affirmed his support for the Employment Non-Discrimination Act and urged Congress to pass that legislation, which had come just one vote shy of passage in the Senate hours after the same body overwhelmingly approved DOMA. ”I also want to make clear to all that the enactment of this legislation should not, despite the fierce and at times divisive rhetoric surrounding it, be understood to provide an excuse for discrimination, violence or intimidation against any person on the basis of sexual orientation,” Clinton said. ”Discrimination, violence and intimidation for that reason, as well as others, violate the principle of equal protection under the law and have no place in American society.”

Clinton’s decision to sign DOMA into law is one that has long haunted the former president, who has shown little desire to address it. Clinton’s 2004 autobiography, My Life, makes no mention of DOMA in its more than 1,000 pages. As recently as 2004 Clinton reportedly urged presidential candidate John Kerry to endorse a proposal by President George W. Bush to amend the Constitution to ban same-sex marriage. “I’m not going to ever do that,” Kerry told aides after listening to Clinton’s suggestion, according to Newsweek (a Clinton spokesperson has denied these reports). Kerry was one of only 14 senators to vote against DOMA in 1996, and during a State Department event marking LGBT Pride Month in June said he is “proud to be the first sitting Secretary of State to support same-sex marriage.” Hillary Clinton did not publicly endorse same-sex marriage until March 2013, shortly after leaving her position as secretary of state. Despite her vocal support for LGBT-rights, Hillary Clinton herself has come under fire for positions seen as out of step with most progressives. During a recent interview with NPR, Clinton said she believes marriage should be left up to the states and expressed her support for state-by-state efforts to secure marriage equality, a position that contradicts the majority of marriage-equality advocates who believe a national resolution must come from the Supreme Court and puts her inline with Republicans such as Sen. Rand Paul. Earlier this month President Barack Obama said he believes the Constitution guarantees same-sex couples’ right to marry in all 50 states.

Bill Clinton publicly endorsed same-sex marriage in 2009 and that same year said he did not like signing DOMA, but did all he could. Before oral arguments were heard by the Supreme Court over DOMA’s constitutionality in March 2013, he penned a column for The Washington Post calling for the law to be struck down.

“As the president who signed the act into law, I have come to believe that DOMA is contrary to those principles and, in fact, incompatible with our Constitution,” Clinton wrote.

In a news release, GetEQUAL labeled Clinton’s appearance at the HRC dinner as ironic “given that so much work has been done over the past two decades to undo DOMA and DADT — bills that President Clinton signed, and that he did not apologize for tonight.” GetEQUAL supporters rallied outside of the dinner to raise questions about Hillary Clinton’s potential presidential bid and ensure a Hillary Clinton administration would be more progressive than her husband’s was.

It’s not the first time Clinton has faced calls for an apology to the LGBT community. After Clinton’s speech at the Democratic National Convention in 2012, New York Times columnist Frank Bruni published an open letter to Clinton calling on him to apologize. ”At the Democratic National Convention, on the campaign trail, in speeches aplenty and during interviews galore, you spoke eloquently about what this country should value, and you spoke unequivocally about where it should head,” Bruni wrote. ”Such a bounty of convictions, such a harvest of words, except for one that’s long overdue: Sorry.”

Despite what could be construed as a missed opportunity by Clinton to put to rest lingering discontent over his LGBT-rights record once and for all before an audience of LGBT people, Clinton was still welcomed with warm enthusiasm. For many, it seems, all has been forgiven.

“I would only say that, judging by the reaction, he hit just the right tone,” said Richard Socarides, who advised Clinton as president on gay and lesbian civil rights issues and attended the dinner. “He’s previously on many occasions made clear what he would have done differently today, especially given his vocal support for Edie Windsor’s DOMA challenge. I think most people understand that and want to focus on the future — which was what his speech was all about — the work that remains. He’s obviously grateful that the community works to build allies and understanding rather than keep score.”

Clinton did indeed look to the future. Stating that the focus must remain on all of the things that make us similar, not the few things that divide us, Clinton articulated a viewpoint not so different from the arguments made by activists and advocates who urged him to veto DOMA in 1996.

“I believe that in ways large and small, peaceful and sometimes violent, that the biggest threat to the future of our children and grandchildren is the poison of identity politics that preaches that our differences are far more important than our common humanity,” he said.