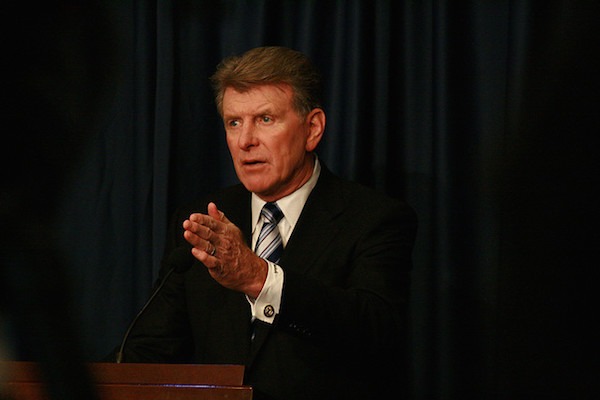 Otter’s office said the governor believes the 9th Circuit made “some critical errors in its decision, among them failing to apply the correct legal standard to Idaho’s marriage laws.” As such, he has requested an “en banc” review by 11 judges from the 9th Circuit would enable the state to “make its case to a larger and more diverse group of jurists.”

According to the petition for en ban review filed by attorneys for the Republican governor, the decision by the 9th Circuit “appears to be judicial policymaking masquerading as law.

“But it is bad law, conflicting with numerous decisions of this Court, other circuits and the Supreme Court,” the petition continues. “And it is even worse policy, creating enormous risks to Idaho’s present and future children—including serious risks of increased fatherlessness, reduced parental financial and emotional support, increased crime, and greater psychological problems—with their attendant costs to Idaho and its citizens.”

“One of the key arguments against the Idaho Constitution’s defense of traditional marriage has been that redefining it to include same-sex couples would not harm anyone. But the Hitching Post example shows the fallacy of that position,” Otter said in a statement. The Hitching Post is a for-profit wedding chapel located in the city of Coeur d’Alene. On Friday, the owners of the chapel filed a federal lawsuit against the city for an LGBT nondiscrimination ordinance that legally bars them from discriminating against same-sex couples. Although the statue has a religious exemption, the chapel is a business not run by a church.

However, according to Boise Weekly, Coeur d’Alene City Attorney Michael Gridley said the suit filed against the city has no grounds because the chapel filed for religious corporation status with the secretary of state as a religious institution earlier this month.

“I have repeatedly pointed out to the courts that unaccountable judges imposing their perception of social change on the law – rather than public policy being changed through the democratic process – undoubtedly will lead to increased religious strife and restrictions on private property,” Otter continued. “For these important reasons, I will continue defending Idahoans’ self-determination and the will of Idaho voters who decided that traditional marriage is a core principle of our society.”