Oyamel prepares for its annual Day of the Dead celebration

By Doug Rule on October 16, 2014 @https://twitter.com/ruleonwriting 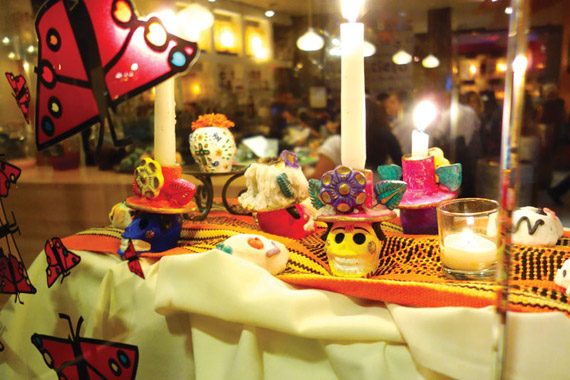 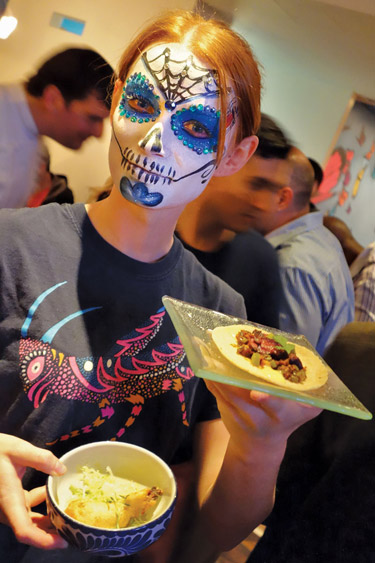 “One of José’s big things is not just to feed people, but to create an experience and to tell a story,” says Colin King, referring to storied chef José Andres.

Certainly, King, head chef at Andres’s D.C. temple of Mexican cuisine Oyamel, is doing his part with the special menu he’s created for this year’s Day of the Dead celebration. “The Day of the Dead is a really fun two-week time period where we can really show people a different side of Mexican culture,” he says, “and show how it’s very different from how we celebrate this time of year.”

Though it might seem otherwise in the United States, the Day of the Dead isn’t simply a post-Halloween celebration — a way to extend the season of scary, spooky fun and consumption of candy and pumpkin-flavored foods. Rather, this two-day Mexican holiday, celebrated every year on November 1 and November 2, is meant to honor and remember friends and family members who have died. The holiday has its own creepy dressed-up tricks — chiefly, all the sugar skulls and human skeletons paraded out to represent the dead. At its heart, though, the focus is on offering delectable treats and toasting the dead with their favorite foods and drinks.

For the past eight years, Oyamel, named for the Mexican fir trees that provide shelter to monarch butterflies in the winter, has honored a different Mexican culinary or cultural figure as the centerpiece of its Day of the Dead celebration. This year’s toast is to Rodolfo Guzman Huerta, the famous Mexican wrestler and actor known as El Santo. Credited with popularizing professional wrestling and known as a masked crusader for justice in Mexican cinema, El Santo remains a legend in his homeland 30 years after his death — in no small part courtesy of his son, who carries on his tradition of being a famous wrestler. 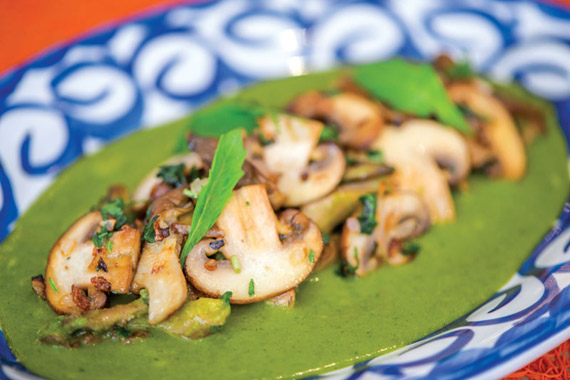 Oyamel honors El Santo with a menu developed in consultation with the legend’s surviving family members, who gave details about roughly 20 of his and his son’s favorite dishes — roughly half of which were already on Oyamel’s everyday menu. King worked with his sous chefs to modify another seven or so, including fish in a Veracruz-style sauce, roasted baby pig in a salsa of chile morita, and Ancas de Rana en Mole Verde — or fried frog legs in a green sauce. And yes, given my samplings at a special preview earlier this month, they do taste like chicken.

The standout of the menu might just be the Mole de Olla con Rebo de Res, or succulent oxtail braised in vegetable stew. King, however, is most excited about the Huatape de Hongos, or sautéed mushrooms, in “this very kind of rich, a little bit spicy, herbaceous broth.” Local ingredients are the focus of most dishes, including those mushrooms, which come from local foragers. 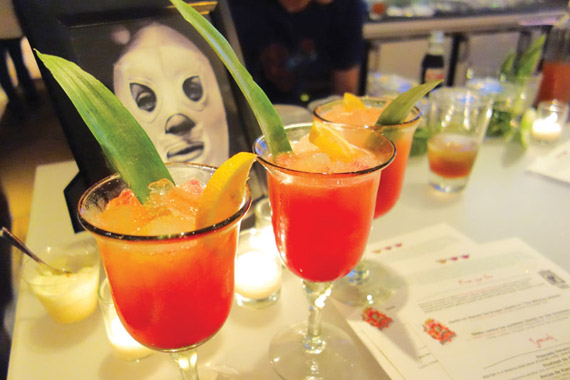 Oyamel may offer the area’s largest and most elaborate celebration, but at least two other Mexican restaurants will be celebrating Dia de los Muertos at the end of the month. Casa Oaxaca (oaxacaindc.com) on 18th Street in Adams Morgan is one, offering a special menu featuring a couple appetizers, two entrees, including a slow-cooked whole chicken Mixiote and two pumpkin desserts, plus a mescal flight and a pumpkin-infused mescal cocktail El Catrin. Another is Passion Food Group’s Fuego Cochina y Tequileria (fuegova.com) on Clarendon Boulevard in Arlington, which will serve up several tequila-based concoctions, lots of squash items on its menu, plus traditional Day of the Dead bread, Pan de los Muertos, a type of sweet roll.

Meanwhile, Oyamel’s Beverage Manager Jasmine Chae created a handful of cocktails inspired by titles from El Santo’s movies. At the preview, the standout was Santo en Atacan las brujas, or “Santo in the Witches Attack,” a mix of tequila with a refreshing grapefruit-lavender soda. Oyamel is even debuting a special tequila for this year’s Day of the Dead celebration — El Luchador Organic Tequila, a new, high-proof spirit created by David Ravandi, founder of 123 Organic Tequila. “He’d prefer if you drink it out of a wine glass neat,” King says.

Inspired by a recent two-week culinary tour of Mexico, King is eager to use this year’s Day of the Dead as his own jumping-off point “to give people a little more insight into the culture…and to create a cool experience.” 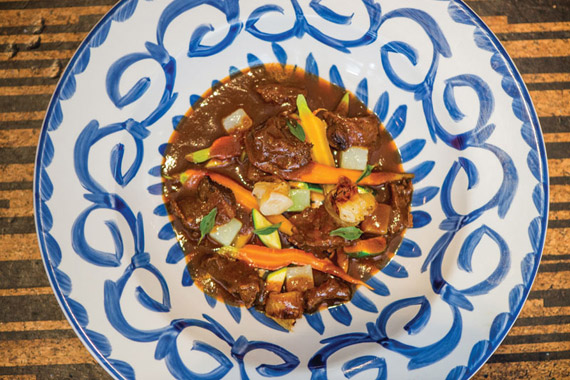