By John Riley on November 20, 2014 @JohnAndresRiley

As Thanksgiving nears, Food & Friends — best known for supplying home-delivered meals and nutrition counseling to area residents suffering from HIV/AIDS, cancer or other serious ailments — is for the eighth year embarking on its Slice of Life annual pie sale fundraiser. 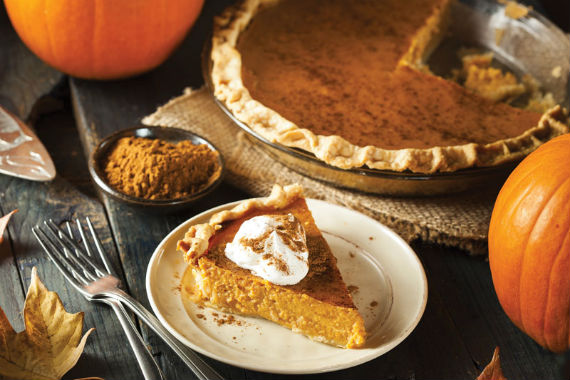 As part of Slice of Life, Food & Friends allows the public to order pre-made pies online and arrange to pick them up at one of 37 different CVS stores throughout the Greater Washington area on Tuesday, Nov. 25. Each pie measures 9 inches in diameter and comes in one of five different flavors. They cost between $25 to $45, depending on the ingredients. Proceeds from the event benefit Food & Friends by helping them get closer to their goal of raising at least $9 million each year to continue to provide meals and nutrition counseling to clients.

“Slice of Life is an interesting concept,” says Craig Shniderman, executive director of Food & Friends. “It’s not just a donation to a worthy cause, but donors get something back in return.”

Food & Friends will again be working with Baguette Republic, a Sterling-based bakery that specializes in handmade pies using natural ingredients with no preservatives or saturated fats. Food & Friends has worked with several vendors over the years, most recently a company based out of Chicago, but switched to Baguette Republic last year after looking for a bakery that was local and more easily accessible, and whose food-handling procedures met Food & Friends’ high expectations.

To hear Dahmane Benarbane, head baker and owner of Baguette Republic, tell it, Food & Friends “fell in love” with his company’s product and philosophy, which emphasizes going back to locally-sourced food and using traditional baking techniques.

“It’s like the difference between buying a cake from a local bakery rather than a supermarket chain like Costco,” says Benarbane, the former head baker for sandwich-and-salad shop Marvelous Market, which first introduced artisan bread to the Washington food scene. “With the supermarket cake, you’ll probably end up throwing most of it out, because it’s for decoration, rather than taste.”

While Slice of Life is a once-a-year occurrence, Benarbane’s bakery offers most of the pies — distributed daily at various restaurants, caterers and grocery stores, as well as local farmers markets — in Northern Virginia throughout the year.

“We consider ourselves a big part of D.C.’s palate,” he says.

Benarbane says the spiced pumpkin pie or the traditional sweet potato pie are commonly requested around the Thanksgiving season. His most popular products are apple or pecan pies, the latter of which uses molasses and brown sugar in its filling.

As far as Slice of Life is concerned, Benarbane always tries to introduce a new flavor each year to appeal to the non-traditional pie eater’s preferences. This year, he may have struck gold with the American Airlines Sky Pie, a unique creation that combines an almond paste with amaretto on top of a chocolate brownie bite, topped with slivered almonds and powdered sugar — a concoction so rich and decadent that Food & Friends’ Shniderman recommends it by name. So much for not picking favorites.

Slice of Life not only benefits the D.C. area’s human residents, but those of the four-legged variety as well. For the second year, Peter Glassman, a member of Food & Friends’ board of directors and the director and head surgeon at Friendship Hospital for Animals, has devised a way to also help local animal rescue organizations, by having them serve as vendors for Slice of Life. Interested customers can purchase pies through one of three organizations — the Washington Humane Society, City Dogs Rescue and Lucky Dog Animal Rescue — and for every 20 pies sold by each group, Friendship will give that rescue organization a $450 credit towards veterinary services. That’s in addition to a regular discount that Glassman already provides to rescue groups, which can rack up hefty bills to treat rescued animals that have been abused or abandoned.

“It’s a win-win for everyone,” Glassman says. “Every pie pays for free meals for humans. And it’s only an upside for the rescue groups. Everybody on the hospital team participates in the effort. Friendship takes our community responsibility very seriously.”

Adds Food & Friends’ Shniderman: “We really like this relationship with Friendship. It shows how people’s kindness extends to all people and animals in our community.”

And that’s an even sweeter thought to savor.

Pies purchased through Food & Friends’ Slice of Life fundraiser can be picked up at local CVS stores around the area. For more information, visit sliceoflifedc.org.

John Riley is the local news reporter for Metro Weekly. He can be reached at jriley@metroweekly.com
← Previous Story Richard Sandoval and Gabrielle Hamilton celebrate new cookbooks with D.C. dinners
Next Story → Gifting Gormands