By John Riley on November 5, 2014 @JohnAndresRiley 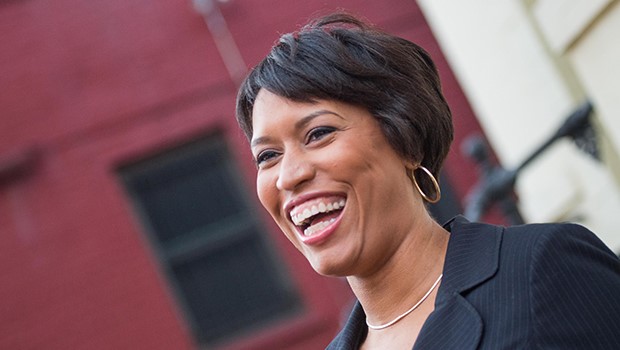 In the end, the polls were right.

Councilmember Muriel Bowser (D-Ward 4), who commanded a 17 point lead in the run up to Election Day, was elected mayor in a five-way race, besting her chief opponents, Councilmember David Catania (I-At-Large) and former Councilmember Carol Schwartz by a 54-35-7 margin. Other votes went to Libertarian Bruce Majors and Statehood-Green Party nominee Faith.

Most importantly, Bowser performed well across the city, outpacing Catania by significant margins in her home ward as well as Wards 5, 7 and 8, and narrowly winning Ward 1. Catania edged past Bowser in Ward 6 and enjoyed double-digit leads over her in Wards 2 and 3.

While there were no exit polls, Bowser appears to have stayed competitive with Catania in precincts that are believed to have high concentrations of LGBT voters. According to the Williams Institute, a UCLA School of Law think tank that conducts research on sexual-orientation and gender-identity laws and public policy, the 2010 Census shows tracts with high proportions of same-sex couples overlapping 43 different voting precincts throughout the city. Her margins of victory over Catania were better in the wards she won outright, as well as the Ledroit Park and Shaw neighborhoods, while Catania outperformed her in the gentrifying U Street and Columbia Heights neighborhoods of Ward 1, and won by double-digits in LGBT-heavy precincts in Ward 2 and Ward 6, even though he only carried the latter by a narrow margin overall.

Voters also had the chance to select their first popularly-elected attorney general, with Karl Racine, the managing partner of law firm Venable LLP, claiming victory with 37 percent of the vote, to Edward “Smitty” Smith’s 19 percent. White-shoe lawyer Lorie Masters and Paul Zukerberg, a defense attorney best known for his advocacy on behalf of the decriminalization and legalization of marijuana, earned 14 and 13 percent of the vote, respectively, while out lesbian legislative and public policy attorney Lateefah Williams earned 7 percent of the vote.

Due to Catania’s mayoral bid and the defeat of Councilmember Jim Graham (D-Ward 1) in the Democratic primary, for the first time in 17 years, there will be no LGBT representation on the Council. Out lesbian independent candidate Courtney Snowden fell short in her bid for the seat being vacated by Catania, coming in fifth place among 15 competitors seeking two at-large seats with 6 percent of the vote, while openly gay Republican candidate Marc Morgan came in ninth with 3 percent. Incumbent Councilmember Anita Bonds (D-At-Large) successfully defended her seat with 24 percent, while independent Elissa Silverman came in second with 12 percent. D.C.’s U.S. Shadow Senator Michael D. Brown came in third with 8 percent, while Robert White, a former staffer for U.S. Del. Eleanor Holmes Norton (D-D.C.) came in fourth with 7 percent of the vote. Twenty-two percent of all votes cast were “under votes,” meaning people either deliberately abstained as a form of strategic voting or only chose one at-large candidate instead of two.

In one of the most-watched State Board of Education races, featuring two openly gay men running among a five-person field, David Do came in second with 25 percent of the vote and Scott Simpson came in third with 12 percent of the vote, both falling to Laura Wilson Phelan, who won 29 percent, a margin of fewer than 700 votes ahead of Do. Had either man been victorious, they would have been the second openly LGBT member of the State Board of Education after Ward 2 representative Jack Jacobson.

Where LGBT candidates did seem to have some measure of success was in races for Advisory Neighborhood Commissioner, where a number either emerged victorious from competitive races or faced no major opposition. According to tabulations based on results from the D.C. Board of Elections, there is now at least one openly LGBT ANC commissioner in each of the city’s eight wards.

John Riley is the local news reporter for Metro Weekly. He can be reached at jriley@metroweekly.com
← Previous Story CUA Democrats Rescheduling Gay-Themed Event
Next Story → Equality Virginia to Name the Northams “Legends”