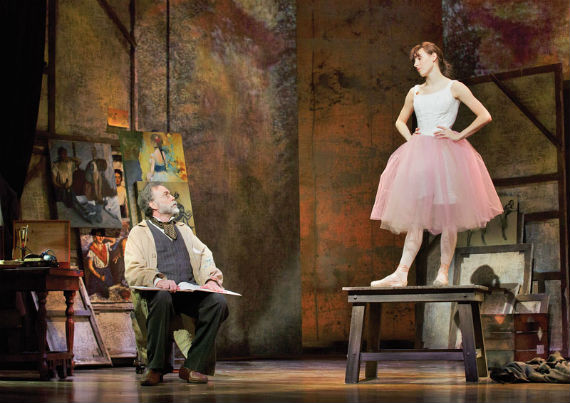 THE NEW MUSICAL Little Dancer, now having its world premiere at the Kennedy Center, tells the partly imagined story of the girl who posed for Edgar Degas’s famous statue. It’s chiefly set in and around the demimonde of the Paris Opera Ballet in the 19th century.

As such, the musical is at its strongest and most original when director and choreographer Susan Stroman incorporates elements of ballet, most notably during an extended sequence near its end. Here, Tiler Peck, a principal dancer with the New York City Ballet, gets to display her dancing skills, as her character, the Young Marie, concisely conveys through movement everything that we just saw and heard happen in the musical’s preceding two hours. It’s a rather unprecedented merger of two parallel performance genres, and a dazzling display that almost makes Little Dancer worth seeing all its own.

There are other aspects that make this production a worthwhile trip to the theater — principally Beowulf Boritt’s grand, art-inspired sets, William Ivey Long’s equally imaginative costumes and Stroman’s starry, strong-voiced cast. Boyd Gaines and especially Rebecca Luker are knockouts as Degas and Adult Marie, respectively. Other standouts include the charismatic Janet Dickinson, who brings artist Marie Cassatt vividly to life, and Jenny Powers, who as Antoinette is a dream of a bawdy, well-heeled older sister.

The show itself is on less solid footing. Stephen Flaherty has composed several great tunes (“Laundry,” “Little Opportunities”), but the score isn’t as distinguishable as the overall conceit. Lynn Ahrens’s book and lyrics, even less so. There’s also the unavoidable creep factor, as a 14-year-old girl spends hours alone with a significantly older man and is pursued by a couple others with far more prurient interests. Still, if you can overlook that, Little Dancer will surely pirouette its way to favor.